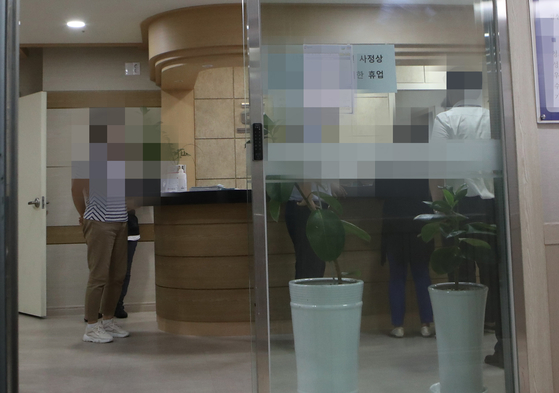 A psychiatrist was stabbed to death by a patient at his own hospital in Busan on Wednesday morning. [SONG BONG-GEUN]


A 60-year-old psychiatrist who was stabbed to death by a man in a Busan psychiatric hospital Wednesday was remembered for his kindness toward patients and a history of volunteering his talents.

The veteran doctor was stabbed by the patient multiple times around 10:10 a.m. at his own hospital, Busan police said Wednesday. There were 18 inpatients at Kim’s small hospital, which he opened in April 2019.

A patient, who suffers from schizophrenia, reportedly refused to stop smoking in nonsmoking areas and wasn't following the hospital's guidelines, prompting Kim to request the patient's discharge.

Police say the patient then left the hospital and bought a knife from a nearby store, before returning to the doctor’s office and stabbing Kim several times.

Kim was immediately transported to a hospital, but died from excessive blood loss.

“My younger brother opened a hospital in April last year with the single conviction that he wanted to treat patients with all his heart, and just as he was getting settled, something like this happened," his older brother told the JoongAng Ilbo, speaking during Kim’s wake at a funeral parlor in Busan.

The alleged assailant, a man in his 60s who had been a patient at the hospital since June, was arrested by police after allegedly spraying himself with flammable materials and attempting to climb out of a hospital window. Police have filed an arrest warrant for murder charges, while the remaining patients have been transferred to other hospitals.

Dr. Kim was the second oldest out of four siblings who grew up under a single mother.

“Though he majored in orthopedics, he switched to the psychiatry department and volunteered his medical services for two years,” recalled the older Kim. “He had a special attachment to psychiatric therapy. He was recognized by patients for being a kind doctor.”

After a 28-year career as a salaried doctor, Kim decided to open his own hospital, where he planned to spend the remainder of his life treating patients.

But the process was not an easy one.

Other tenants in the building where Kim planned to open up his practice filed complaints with the Buk District Office in Busan. One of the tenants, a private academy on the 10th floor, expressed worries that students would feel uneasy.

Under the Medical Service Act, clinics with under 30 hospital beds need to register with the local government. The Buk District Office, because of the civil complaints, did not accept Dr. Kim’s registration.

Kim eventually filed an administrative lawsuit. The proceedings took more than two years, and the Supreme Court finally ruled in his favor, paving the way for him to open his practice last year.

During the two-year legal proceedings, Kim worked as a doctor for a psychiatry hospital in Daegu to continue earning a living.

“My younger brother was worried that the building owner would try to evict him if he didn’t pay the monthly rent and maintenance fees, so he paid it all," the older Kim said.


After winning the administrative lawsuit, Kim had filed a lawsuit seeking damages from the Buk District for 150 million won ($126,600) in indemnities. A final ruling had been expected later this month.

Kim for the past 14 years has also volunteered his medical services at a nursing home for severely disabled patients in Gyeongju.

It took Kim four hours to commute to and from the nursing home, where he would see patients for three hours.

“It's regrettable that my brother, who treated patients with a volunteering mindset and cherished relationships that he had built up, met this kind of end,” said the older Kim tearfully.

Kim's death was reminiscent of that of Lim Se-won, a psychiatrist at Kangbuk Samsung Hospital in Seoul who was stabbed to death by a patient in his office on Dec. 31, 2018.

Lim’s death prompted the National Assembly to stiffen penalties for those convicted of killing a medical worker while on duty. Punishments now range from five years to life in prison.