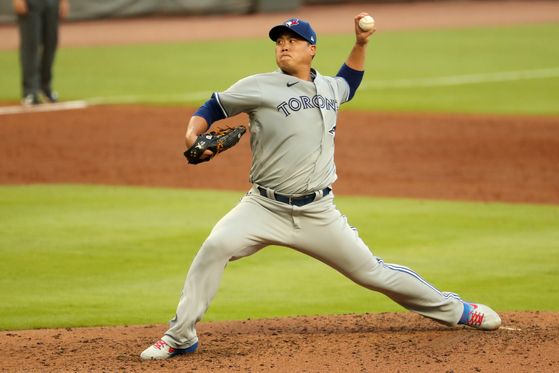 Ryu Hyun-jin of the Toronto Blue Jays throws a pitch during a game against the Atlanta Braves at Truist Park in Georgia on Wednesday. [REUTERS/YONHAP]


The Toronto Blue Jays' Korean starter Ryu Hyun-jin has picked up his first win of the 2020 season.

Ryu shut down the Atlanta Braves over five innings at Truist Park in Atlanta on Wednesday. Striking out eight and walking three, he allowed only one hit to pick up his first win of the season as the Blue Jays beat the Braves 2-1.

It is the first scoreless game by the southpaw since the 2020 MLB season started. He threw 84 pitches, with his ERA dropping to 5.14.

In his Opening Day start on July 24 against the Tampa Bay Rays, Ryu allowed three earned runs in 4 and two-thirds innings in a 6-4 Toronto victory. He took his first loss, allowing five runs on nine hits in 4 and one-third innings against the Washington Nationals on July 30. The Blue Jays lost 6-4.

With his new short, neat haircut, Ryu said in a pre-match interview the previous day that he had refreshed his mind for the next game and was ready to make a turnaround.

Against the Braves, Ryu started the first inning with a walk to leadoff Ronald Acuna Jr. But soon he picked off the runner and wrapped up the inning by striking out two.

He allowed a one-out single on a ground ball to Adam Duvall in the second, but he again repeated with back-to-back strikeouts to close the inning.

Despite two walks in the third and fourth innings, he retired the other batters to keep the Braves off the board through the fifth.

The Blue Jays scored two to help Ryu's performance, taking a 1-0 lead after a double by Vladimir Guerrero Jr. and a sacrifice fly by Danny Jansen.

In the fifth inning, Bo Bichette singled on a line drive to center field and scored as Cavan Biggio hit a single to right field.

Then, Ryu was replaced by right-hander Thomas Hatch after the bottom fifth inning, with the Blue Jays leading the game 2-0.

Four bullpen pitchers including closer Anthony Bass were responsible for the remaining four innings, giving up only one solo homer to Duvall in the seventh to seal a 2-1 victory.

The Blue Jays have posted a 4-5 record so far in the 60-game season.

During the post-match interview, Ryu said he regained the pinpoint accuracy of his pitches, especially signature changeups. He offered 32 changeups out of 84 pitches, helping him strike out six batters.

"My changeup, fastball, cutter — they all improved in today's game," he said through an interpreter. "I still need to brush up on my command and make sure that I go through the lineup more easily."

Blue Jays manager Charlie Montoyo said he is satisfied with Ryu's performance against the Braves, which helped the team end a three-game losing streak.

"That's the guy we were expecting, changing speeds, keeping hitters off balance," Montoyo said. "That's a great sign for us, that he pitched like that, and a boost for us."

Ryu signed a four-year $80 million contract with the Blue Jays as a free agent in December, leaving the Los Angeles Dodgers, where he'd spent the past seven years.

His next outing is expected to fall on the Blue Jays' home opener at Sahlen Field in Buffalo, New York, against the Florida Marlins on Aug. 11.

The Toronto-based team has decided to settle in Buffalo as their temporary home, as the Canadian government rejected the Blue Jay's plan to play home games in Toronto because of Covid-19 concerns.

Sahlen Field, their Triple-A park, has been undergoing an upgrade to meet Major League standards. 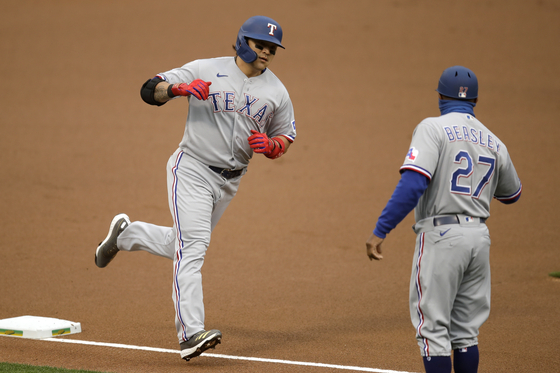 Choo Shin-soo of the Texas Rangers, left, rounds the bases after hitting a leadoff solo home run during a game against the Oakland Athletics in Oakland, California, on Wednesday. [AP/YONHAP]


Along with Ryu, the Texas Rangers’ Choo Shin-soo also had a strong game against the Oakland Athletics at Oakland Coliseum in Oakland, California on Wednesday.

The veteran outfielder, who was once again assigned as a left fielder and leadoff hitter, hit a leadoff home run over the wall in left field to allow the Rangers to take an early 1-0 lead. This was Choo’s third home run of the season and his 36th career leadoff home run.

Despite Choo’s homer, the Rangers struggled to maintain their lead, as they ended up losing the game 6-4.