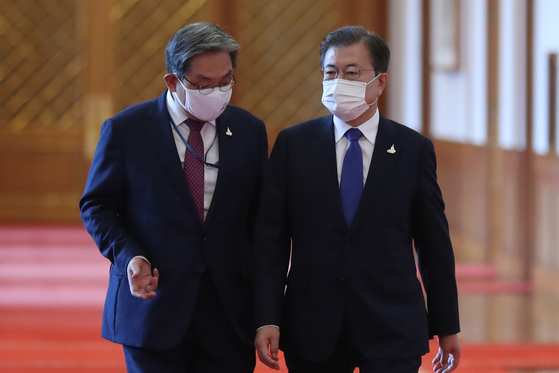 Kang Min-seok, the Blue House spokesman, said in a statement Friday that the six aides offered to resign earlier that day “to take overall responsibility for recent situations,” without specifying further.

The Blue House has stressed the importance of presidential aides setting an example of the government’s sincerity in its real estate policy, urging officials to sell all properties except for one, a message that has been emphasized by Noh.

Noh, among other presidential aides, faced public criticism for his poor handling of his ownership of multiple homes, contradicting the administration's real estate policy to prevent speculation and keep housing prices from rising.

Noh faced backlash last month over a decision to keep his home in Banpo District of Seoul and sell a second home in Cheongju, North Chungcheong, where he was elected three times as a lawmaker.

“Chief of Staff Noh made a comprehensive decision," a Blue House official said, when asked if the resignation was due to criticism of real estate policies.

The official also declined to comment on who their potential successors will be if Moon accepts their resignations.

This marks the first time presidential senior aides offered to resign en masse since Moon took office in May 2017.

Three of the four secretaries replaced by Moon on July 24 were owners of multiple properties.

Moon’s approval ratings have decreased in recent weeks, falling to 44.5 percent according to a survey released by pollster Realmeter Wednesday. The drop was seen as a reflection of public discontent with the government's real estate policies, among other issues.

[WORD_ON_THE_WEB] 'What law in the world has only good effects?'