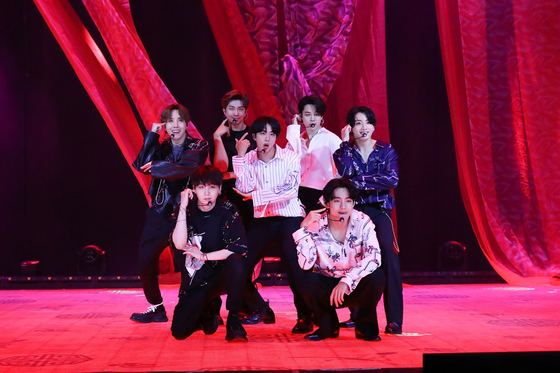 K-pop boy band BTS held an online concert on July 14 amid coronavirus pandemic where some 756,000 fans from over 100 countries tuned in, setting a Guinness World Records. [YONHAP]


Big Hit Entertainment, the agency behind K-pop phenomenon BTS, has gotten a step closer to going public within this year after its application passed a preliminary screening by the Korea Exchange on Friday.

The exchange operator said that Big Hit Entertainment “fulfills the requirements to go public, making it eligible for an initial public offering [IPO].”

According to the bourse, a company that passes the preliminary screening should file a securities registration statement with the country’s Financial Services Commission within the next six months.

The approval Friday was around three weeks later than originally scheduled.

A preliminary screening result is supposed to be announced within 45 days of an application. Big Hit Entertainment applied for its evaluation on May 28.

At the time, Korea Exchange said it requested the entertainment company to submit additional documents without going into details.

Big Hit Entertainment was founded in 2005 by music producer Bang Si-hyuk and struggled to form successful K-pop acts in its early years. It hit a jackpot with the seven-member boy band BTS, which debuted in 2013.

BTS has put K-pop on the international music scene, becoming the first Korean musicians to debut at No. 1 on the U.S. Billboard Top 200 chart in 2018. It topped the chart three more times.

Big Hit is home to other K-pop musicians including vocalist Lee Hyun and boy band Tomorrow X Together, also known as TXT.

Its operating profit last year was more than the combined profits of the country’s so-called Big 3 players in the entertainment industry — SM Entertainment, JYP Entertainment and YG Entertainment — all of which are public companies.

“The fact that the combined market capitalization of the three entertainment agencies is no more than 2.6 trillion won, the value of the soon-to-be-registered Big Hit Entertainment will be much more than that,” said Shin Seung-jin, an analyst at Samsung Securities.

The company’s founder, chairman and CEO, Bang Si-hyuk, is the biggest shareholder with a 43.4 percent stake, followed by game developing company Netmarble, which holds 25 percent.

Netmarble's chairman Bang Jun-hyuk is a cousin of Bang Si-hyuk.

Netmarble shares closed at 151,000 won per share on Aug. 7 upon the preliminary approval news, a 7.86 percent jump from the previous day.