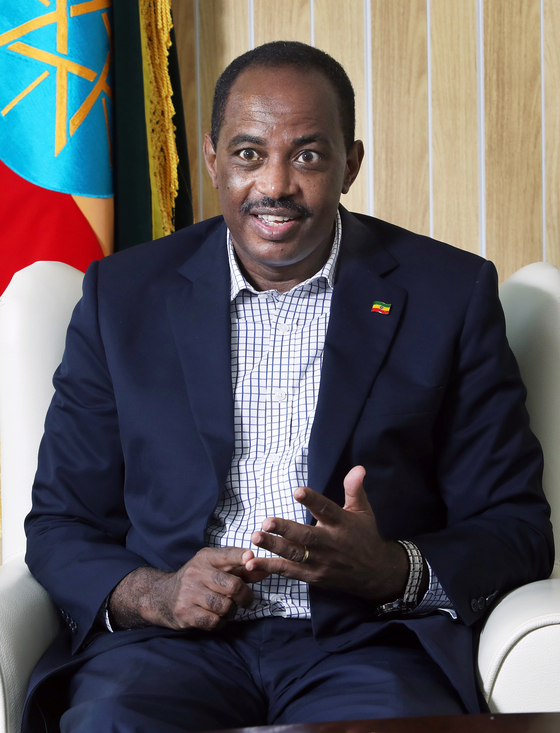 Shiferaw Shigutie Wolassa, ambassador of Ethiopia to Korea, speaks with the Korea JoongAng Daily at the embassy in central Seoul on Wednesday. [PARK SANG-MOON]

Troops from the African nation were hailed for their valor

When Haile Selassie sent over 3,500 soldiers to fight for Korea seven decades ago, the Ethiopian emperor did not mince words.

The first squad of infantrymen dispatched from the African nation in April 1951 was christened “Kagnew,” meaning “the battalion which makes decisive attacks and annihilates enemies.”

“The Kagnew Battalions engaged in combat 236 times and won every encounter, as both attackers and defenders,” said Shiferaw Shigutie Wolassa, ambassador of Ethiopia to Korea.

The Ethiopian soldiers took trains to Djibouti, where they boarded military boats and sailed for weeks before reaching Busan in May 1951.

The 3,518 soldiers formed three Kagnew Battalions and took part in key battles. The battalions fought in the Battle of Jeokgeun Mount Samhyun in September 1951; the Battle of Samgak Hill in October 1952, north of Kimhwa area in present-day North Korea; and the Battle of York and Uncle Hill in May 1953, north of Yeoncheon County in Gyeonggi.

But to Colonel Melesse Tessema Debela, who landed in Korea in February 1952 and served part of the 2nd Kagnew Battalion, battles were battles, none more significant than the last.

“We called the battles by their code names, like Triangle Hill, Pork Chop or T-Bone,” he told Korea JoongAng Daily over the phone on Thursday. 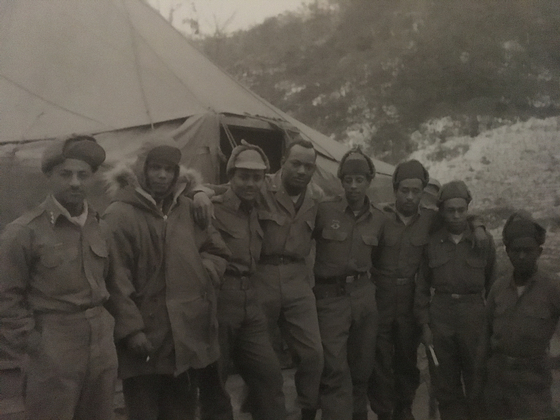 Melesse Tessema Debela, an Ethiopian veteran of the Korean War (1950-1953), second from left, with other Ethiopian soldiers during the war. [MELESSE TESSEMA DEBELA]


Like all soldiers on the frontlines, Debela was trained to obey orders in all situations, including the deaths of his closest friends.

“Moges Aliyu, Dejene Teklewold and I, we were friends from the time that we attended the military academy in Ethiopia together,” Debela said.

“I saw them take the bullets before my very eyes while we were in combat. They were on the ground, but you cannot give any attention to that, you give attention only to the military orders — you go forward, you leave the bodies there and then you continue your mission. There is no retreat in the battlefield, you are either there to kill or to die.”

But the Ethiopians were meticulous in collecting their dead.

“At the conclusion of the war, the Ethiopians were the only contingent that had no prisoners to collect from the North Koreans since no Kagnew soldier ever surrendered,” said Wolassa. “Another distinction was that they never left their dead behind, and it was noticed that there never seemed to be dead bodies of Kagnew soldiers on the battlefield.”

Their valor was recognized by both the United States and Korea during the war.

The battalions were assigned to the 32nd Regimen of the 7th U.S. Division during the war and often engaged with Chinese troops on the frontlines.

A U.S. Presidential Unit Citation was presented to the 1st Kagnew Battalion for capturing Hills 700 and 602 during the Battle of Jeokgeun Mount Samhyun in 1951.

Korea also presented the Presidential Unit Citation to the 2nd and 3rd Kagnew Battalions for their contributions in the 1952 defense of Samgak Hill, located in present-day North Korea, and for their recapturing of positions in front of Mount Cheondeok in Yeoncheon in 1953.

Ethiopia was the first African nation to respond to the United Nations’ call for the world to come to Korea’s aid after war broke out on the peninsula. It had its own reasons for doing so, said Ambassador Wolassa.

“Ethiopia was a founding member of the League of Nations, but we had to fight for our sovereignty ourselves during our struggle against Italy’s fascist aggressions,” Wolassa said.

“Mindful of [this experience], Ethiopia agreed to dispatch the Imperial Bodyguard in response to the UN Security Council’s call [...] knowing how important it was for the global community to cooperate for justice and collective security.”

Once in Korea, the Ethiopians stayed on until 1965, rotating the soldiers stationed in Korea each year and contributing to its peacekeeping efforts. 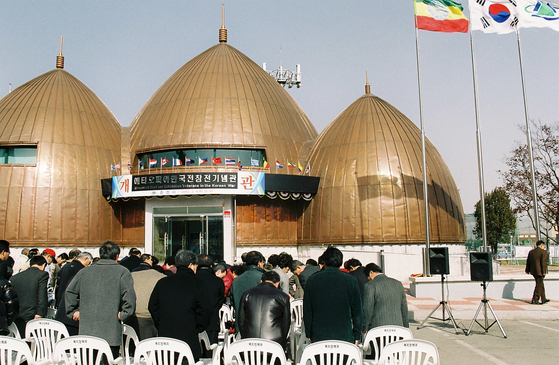 Memorial Hall for Ethiopian Veterans in the Korean War in Chuncheon, Gangwon. The hall was established in 2007 to honor the veterans’ participation in the war and holds photos and records of the war. [CHUNCHEON CITY GOVERNMENT]

“They were sent to help with rebuilding the bridges and other infrastructure,” Wolassa said. “And some nurses were also dispatched from Ethiopia to serve in hospitals operated by the United Nations Command.”

Friendships formed during this time continue to bridge the two nations today.

“There was a Korean boy, about six to seven years old at the time, that we helped take care of in the 2nd Kagnew Battalion,” Debela said. “I named him Sintayehu, which means in Ethiopian, ‘How many problems did I see in my life.’ We did everything together — we’d eat together, he’d sleep in our barracks and we’d teach him [Ethiopia’s national language,] Amharic.”

Debela and a group of Ethiopian veterans who remembered Sintayehu started looking for him through their Ethiopian contacts in Korea, and were able to set up a meeting with their long-lost friend in Korea in 2010.

“It was the 60th anniversary of the Korean War that year, and our contacts in Korea were able to finally locate him,” Debela said. “So a bunch of us flew to Korea and met Sintayehu. And I just couldn’t believe it, that he had forgotten all the Amharic!” 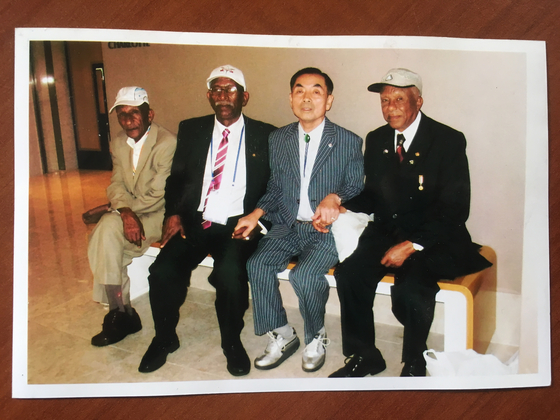 Debela, far right, with Sintayehu, second from right, during their meeting in Korea in 2010. [MELESSE TESSEMA DEBELA]


It was the first time Debela had seen Korea since its war-ravaged days in the early 1950s. Having seen what he calls two completely different faces of Korea, he said his image of the nation has become a strange mix of those experiences.

“When I arrived in Busan in 1952, the first things I saw were buildings in ruin and many faces, all so sad, and children crying on the streets,” he said.

“Then I came back in 2010, and saw all these modernized buildings, roads in good condition, these sweet faces of Koreans, all smiling, well-dressed, young children chatting and going to school. When I think of Korea, these different images of Korea flood my mind.”

Debela, who is also president of the Ethiopian Korean War Veterans Association, has told fellow veterans about the radically altered Korea that he saw.

There are 129 surviving veterans today, according to the Korean Embassy in Ethiopia.

“Korea was in the 11th position economically [in 2016] and that situation may satisfy you, but not as much as it satisfies us,” Debela said. “We are so proud, that we gave our lives to Koreans to reach this position in the world.”

“A poor, war-ravaged nation became a global economic powerhouse in a short period and was transformed from an aid recipient to a donor nation,” said Wolassa.

“Our hero fathers put down their footsteps for the current Korea [...] this is what always makes our people and country proud. Currently, South Korea is able to negotiate, to defend, to restore its own peace and stability and to influence others. We are always hoping that South Korea and North Korea will create sustainable peace and harmony for their people toward a united Korea.”

Debela returned to Ethiopia in 1953. A decade later, he went to serve in peacekeeping operations in the Republic of the Congo. 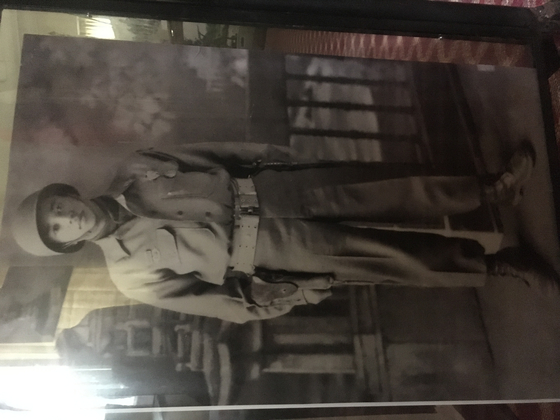 The time in between was not the easiest for the soldier, who had experienced wartime atrocities for the first time.

“I had signed up for the Korean War when I was fresh out of the military academy. I was just 22 years old,” he said. “I was too young at the time to have an understanding of the political background of the war at the time. I just knew that I was going there to fight.

But Debela, 91 today, has no regrets about his decision 69 years ago.

Asked if he would do it again if he could go back in time, Debela responded, without a moment’s hesitation, “Of course, I fix the bayonet on my rifle and go forward!” 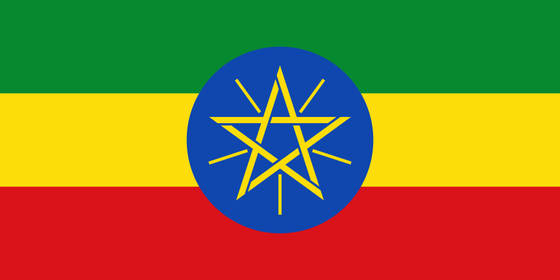 
Ethiopia was the first African nation to respond and come to the aid of South Korea at the outbreak of the Korean War in 1950. Ethiopia dispatched a total of 3,518 soldiers who served in three Kagnew Battalions from 1951 to 1953.

A total of 121 Ethiopian soldiers died and 536 were wounded during the war. Ethiopia continued to send soldiers to Korea after the war, with the last troops leaving in 1965.