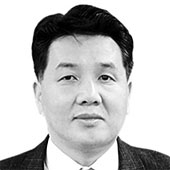 
Ever since the ruling Democratic Party (DP) raised the issue of relocating Korea’s administrative capital to Sejong City, I thought I’d drop by one day to take a look for myself. Last weekend as I drove to Daejeon to meet a friend, I did just that.

The moment I drove on Geumgang Bridge on my way to central Sejong, the first thing that came into sight were high, gray concrete buildings and yellow crane towers. Construction sites were at every corner, high-rise apartment complexes lined the river, and I could smell the fresh air of a newly developed town around the Sejong Government Complex.

There were multipurpose buildings, commercial buildings, apartments and an odd circle-shaped bridge in the works. An empty lot across from Sejong Lake Park — a potential candidate for the National Assembly’s new venue — was covered in weeds, yet the large lake and nearby National Library of Korea, Sejong, were quite aesthetically pleasing. Overall, my impression of Sejong was that it was bustling yet desolate, all at the same time.

Sejong city reminds me of Brasilia, the capital of Brazil. Brasilia is a planned city just like Sejong, located some 970 kilometers (603 miles) from the former Brazilian capital of Rio de Janeiro. The construction of Brasilia began in the late 1950s and wrapped up in 1960 under the strict supervision of then-President Juscelino Kubitschek de Oliveira. Construction work on the city, which was designed by world-renowned Brazilian architect Oscar Niemeyer, was so challenging that materials were flown in by helicopter.

When I visited Brasilia in July 2004, I remember the entire country was in a heated debate over the issue of changing its capital again. Brasilia was filled with impressive buildings on a spacious expanse, yet it somehow seemed barren. Local media said that civil servants working there would hang out in Sao Paulo or Rio de Janeiro on weekends. In an obituary piece that Forbes wrote on Niemeyer in December 2012, the magazine called Brasilia an “office campus” that had no hopes of becoming a normal city. Eight years later, not much seems to have changed.

Sejong must not follow Brasilia. Eight years have passed since Sejong was officially designated a special self-governing city in July 2012, but the city is still under construction and suffers a critical lack of urban infrastructure.

The Government Complex area is the only place in Sejong that comes close to resembling a city. Just a few miles away from those government buildings, Sejong still looks like typical countryside.

On July 20, DP floor leader Kim Tae-nyeon raised the issue of relocating the Blue House, National Assembly and every government ministry to Sejong, claiming that under such circumstances we can solve both the issues of overpopulation and exorbitant real estate prices in the Seoul metropolitan area. But Sejong, a city that’s emblematic of Korea’s balanced development agenda, should not be used as a political shield to protect the Moon Jae-in administration from public criticism for its failed real estate measures. Apartment prices becoming stabilized as a result of balanced development is a completely different story from moving a country’s capital to another area to stabilize apartment prices. No wonder even some DP lawmakers disagreed with Kim.

Nobody is against the idea of balanced development, especially in light of the fact that more than half of Korea’s population lives in the Seoul area. But relocating the country’s capital to Sejong — something that’s already been ruled unconstitutional by the Constitutional Court in 2004 — should not be considered the solution to Seoul’s overpopulation. After he was elected in mid-2017, there was a time when Moon stressed balanced development and decentralization of power, but he quickly shifted to other issues, like North Korea and the economy.

It was only recently — after his administration came under public scrutiny for its failed real estate polices — that the DP began trying to redirect public attention to Sejong. So far, the effort has only pushed up housing prices in Sejong.

What about the 10 so-called innovative cities including Wonju and Jeju, which were supposed to comprise another core part of Korea’s balanced development plan? More than a decade has passed since the Korean government vowed to improve their urban infrastructures and relocate public institutions there, but there are still many people who work alone in those areas and visit their families in Seoul every weekend, refusing to settle down.

Local government offices are begging for more financial support, yet the DP’s sole focus is on Sejong. The party has even asked the National Assembly recently to establish a special committee for the Sejong relocation initiative. If the Moon administration’s true intention is to seek balanced development, then it should learn how to develop not just Sejong, but also all of the innovative cities in a balanced manner.