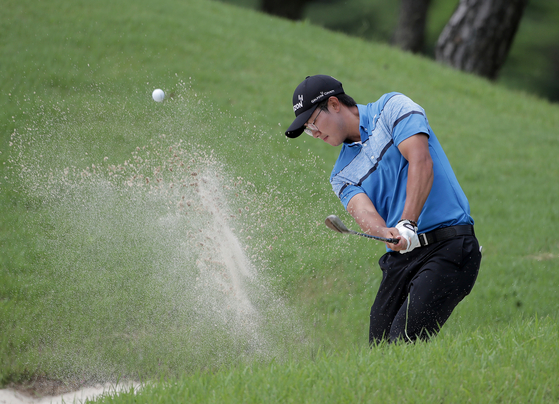 Kim Seong-hyeon hits a bunker shot during the final round of the 63rd KPGA Championship with A-One Country Club in Yangsan, South Gyeongsang, on Sunday. [KPGA]

With four birdies and a bogey, Kim finished one shot ahead of the field to pick up his first major trophy as a non-KPGA Tour player. Although his first birdie was made on the par-4 third, a bogey on the next hole brought his score back to even.

But by making back-to-back birdies on the par-4 eighth and the par-5 ninth, Kim started to make his way up to join the leading pack, which at one point was in a six-way tie. Eventually, Kim broke from the pack to take the sole lead by making a birdie on the par-3 17th.

"[When I made a birdie on the 17th,] I didn't think I would win, but I thought maybe I might have a shot at heading into the sudden-death playoff," Kim said.

Having waited about 30 minutes for the final groups to finish their round, Kim was finally declared the winner of the 63rd KPGA Championship as none of the players managed to add another birdie to extend the tournament into a sudden-death playoff. With a four-round total of five under-par, 275, Kim won his first-ever KPGA Tour event. With a victory, Kim became only the 22nd player on the KPGA Tour history to pick up his first win at the KPGA Championship.

"I still can't believe it, but it feels really great," Kim said. "I was lucky to play Monday […] and to play well [at the actual tournament]. I am very happy."

Kim’s victory came as a huge surprise, as he came a long way to win the KPGA Championship. Since he didn’t have the full-seed on the KPGA Tour, he had to play in the Monday qualifier to play this weekend. He may be the first player on the KPGA Tour to have won the tournament after earning a spot on the field through a Monday qualifier. Making it more impressive, Kim was the last player to qualify, finishing eighth, which was the last qualifying spot. 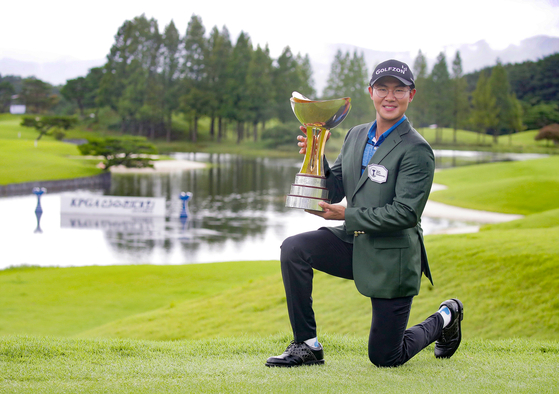 Kim Seong-hyeon poses for a photo with a trophy after picking up a win at the 63rd KPGA Championship with A-One Country Club. [KPGA]


With a win, the 21-year-old took home 180 million won ($151,000). In addition to the prize money, Kim earned a lot more than that as he didn’t have the full-time seed on the KPGA Tour before the tournament. Due to this, this win allowed him to full-time seed in the KPGA Tour for the next five years, starting from the 2021 to 2025 season, as well as permanent entry onto the KPGA Championships.

Kim also earned a spot onto the PGA Tour’s THE CJ CUP @ NINE BRIDGES, which is the only PGA Tour event being held in Korea.

"To be honest, I still can't believe it," Kim said. "But I am very thankful."

Despite this season being a shortened season, due to the coronavirus, Kim still managed to pick up two wins. Kim didn't forget to thank his parents.

The 2019 KPGA Tour’s rookie of the year shot the daily best score of five under par, 65, to finish tied for second along with Ham Jeong-woo. The two finished the tournament at four under par, 276.

Catch every game this Chuseok with our holiday TV guide