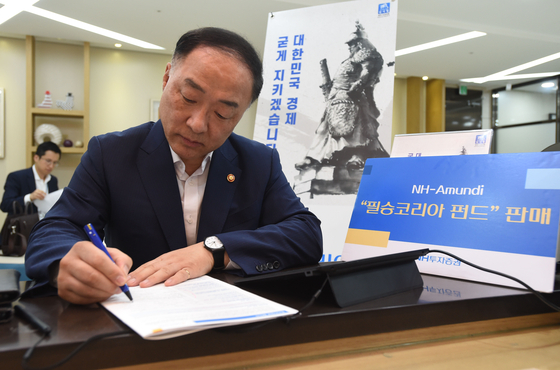 Finance Minister Hong Nam-ki signs up for the "Victorious Korea Equity Fund" in September 2019. [MINISTRY OF ECONOMY AND FINANCE]

Dubbed the “Victorious Korea Equity Fund," it was created on Aug. 14 to invest in companies that make materials that are being restricted for export by Japan.

Since then, the fund’s net asset value increased by 56.12 percent, according to the company. In that time, the Kospi index was up 22.11 percent.

The fund entered the spotlight after President Moon Jae-in became an investor on Aug. 26. Half of the management fees go toward basic research, and thus patriotic was added to the name.

“Companies that make materials and equipment for semiconductors, green cars and IT-related parts makers inside our investment portfolio performed well,” NH-Amundi explained in a statement. “Some companies recorded more than 300 percent increases.”

The fund owns shares in 68 companies, among which more than half, or 36, are parts, materials and equipment makers. In terms of the investment amount, IT and hardware companies are 32 percent of the portfolio, semiconductors 28 percent and software and display companies 8 percent. 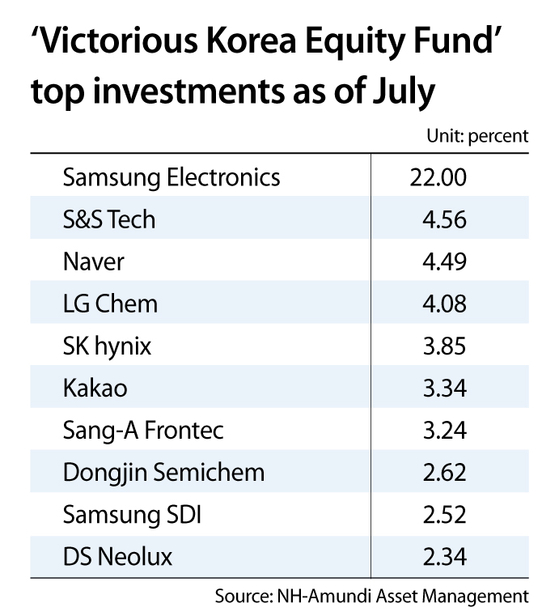 It also dedicates a portion of the assets into stocks of local conglomerates. The fund is 22-percent invested in Samsung Electronics, while Naver, SK hynix and Kakao are each 3 to 4 percent of the portfolio.

While the “Victorious Korea Equity Fund” was able to live up to its name, critics advise investors not to forget similar precedents of government-led funds that eventually fizzled out with each change in government.

During President Lee Myung-bak’s administration, financial institutions rushed to introduce so-called “Green Growth Funds,” which also reported excellent returns. This was around the time when the government launched a presidential committee promoting environmentally-friendly development projects. Now, only a third of those funds still exist.

Four years later under ex-president Park Geun-hye, funds related to unification projects were all the rage. They dropped as tensions between the two Koreas increased.

Experts are concerned that the New Deal Fund may follow in the footsteps of the earlier funds if policy changes.

“The make-or-break factor for the ruling Democratic Party's New Deal Fund will be its sustainability. It needs to make profits notwithstanding changes in the government,” said an industry source.