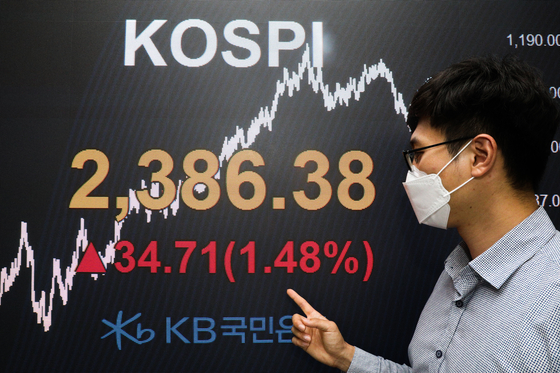 The final Kospi figure is displayed on a screen in a dealing room at KB Kookmin bank in the financial district of Yeouido, western Seoul, on Monday. [NEWS1]


Korea's stock market extended its winning streak to a sixth straight session to close at an over two-year high Monday, as automakers and major tech stocks advanced on hopes for stimulus in the United States and upbeat data. The won fell against the dollar.

The rally came after the Kospi rose by nearly 5 percent last week on hopes for additional stimulus measures in the United States.

"Strong gains by giant automakers have been pulling up the index, adding a favorable atmosphere to the market," Daishin Securities analyst Lee Kyung-min said.

Auto-related shares spiked on expectations of a sales jump at home, and some major tech stocks remained in positive terrain.