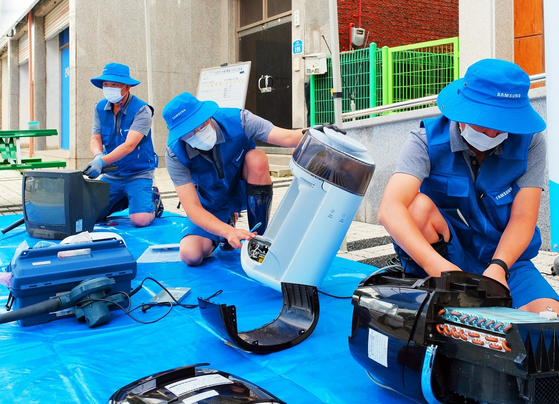 Weeklong heavy downpours have left more than 40 people dead or missing and damaged 14,000 facilities in Korea. Nearly 7,000 have been displaced from their homes.

To help victims, Samsung Group on Friday announced it will donate 3 billion won ($2.5 million) to the Korean Red Cross. On Sunday, Hyundai Motor Group, SK Group and LG Group also joined in, each donating 2 billion won to help those affected by torrential rainfall.

Samsung Electronics said it is offering free repair services for electronic products and has sent laundry and food trucks to the regions severely hit by heavy rains and floods.

On top of the funding, Hyundai Motor and Kia Motors are offering on-site inspections of cars damaged by floods. The automakers will deliver damaged vehicles to service centers and will give a 50 percent discount if consumers want to fix their cars.

Both automakers said they will also support owners of damaged cars when they seek rental cars or buy new cars.

SK Group said SK Telecom and SK Broadband have sent workers to fix communications lines and to offer free Wi-Fi and IPTV services at shelters.
SK's car rental business unit will offer a discount when victims in the special disaster zones use its services.

LG Electronics said it has set up a service base station in Daejeon, and it is offering free repair of electronic products.

LG Household & Health Care said it has donated 8,600 bottles of water and 4,000 relief kits of household goods to South Chungcheong, which has been hit hard by heavy rainfall.

Lotte announced on Monday that it has donated 1 billion won to the victims affected by the recent rainfall, handing the charity funding to Community Chest of Korea, a nonprofit organization.

Lotte’s convenience store chain 7-Eleven will be responsible for distributing relief supplies across the region while Lotte Confectionery will give out its snacks to Korean Red Cross.