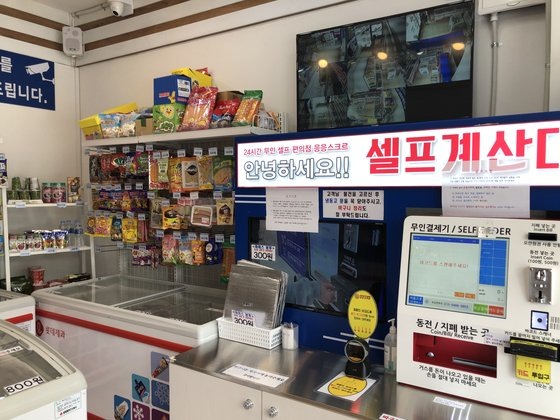 
Cut-price, 24-hour, cashierless ice cream stores are growing in popularity as people’s consumption patterns change due to the Covid-19 pandemic.

Unmanned ice cream stores, which sell ice creams and snacks at cheap prices, continue to have a strong presence in the market. People who visit the stores can choose what they want and pay by themselves through a self-checkout system. Prices are often significantly cheaper than other stores, with an ice cream that costs 1,000 won ($0.80) in a convenience store selling for as little as 400 won. Snacks are sold starting from 200 won.

Aside from the prices, unmanned ice cream stores are gaining popularity as they are open 24 hours. The "untact"  — a portmanteau of the prefix “un” and contact, meaning “no contact” — element is also increasingly popular as people try to limit contact due to the coronavirus pandemic.

Unmanned ice cream store chain Eung Eung Seu Keu Reu has seen a sharp increase in sales and opened more than 400 stores since it launched in March 2019. Rival Pick Me Pick Me Ice has been running some 200 of its total 300 in the country without cashiers. Korea’s largest discount ice cream store, The Dal Dal, has over 400 stores as of June, more than doubling the number of locations since 2018, when it had just 146.

According to Shin Deuk-gi, CEO of Eung Eung Seu Keu Reu, his business saw a surge in sales after he opened 24-hour stores.

“When we used to hire part-time employees, we could only open the stores for 12 hours a day due to labor costs,” Shin said. “After we turned our stores to 24-hour unmanned stores, we could secure customers who visit in the very late night.”

This is also what keeps prices down — Shin says products are more expensive in convenience stores because of delivery and labor costs. 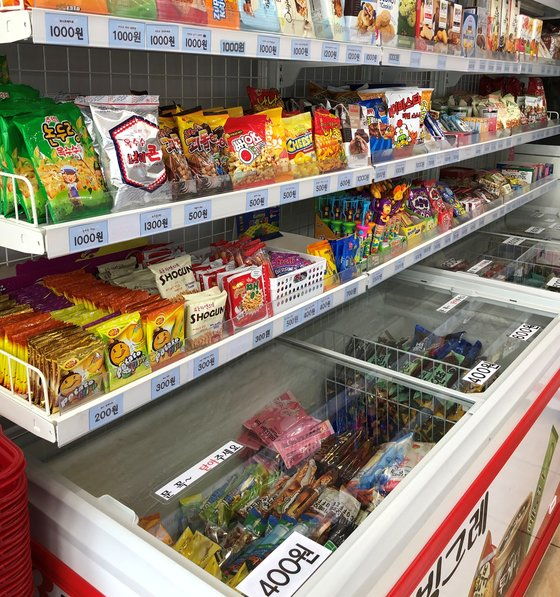 Ice cream prices start from 400 won in the store. Snacks are sold for as little as 200 won. [BAE JUNG-WON]

“It is very fun to visit unmanned ice cream stores and look for various types of snacks,” said a 33-year-old surnamed Park.

Theft is also not a serious problem.

“I have some CCTV footage showing elderly people intentionally not scanning barcodes,” said the owner of Eung Eung Seu Keu Reu’s Yeouido branch in western Seoul. “However, no big incidents have occurred yet.”

According to the experts, Korea is well set up for unmanned stores like this to do well.

“Korea is one of the safest countries from theft. A lot of people even go to the toilet leaving their smartphone on the table in cafes,” said Seo Yong-gu, a professor teaching business at Sookmyung Women's University. “Korea is the best environment for unmanned stores to grow. A lot of CCTV cameras have been installed in cities as well.”

Having employees in stores isn't guaranteed to reduce theft either.

“Although people hire part-time workers in their stores, theft is inevitable,” a spokesperson for the retail industry said. “For store owners, reducing labor costs might be the best option.”

To secure customers, convenience stores are also scrambling to come up with promotional events offering discounts.

CU is currently running a promotion that offers a 50 percent discount on 130 varieties of ice cream products for customers who pay with Paycoin. As it can be combined with discounts offered by mobile carriers, customers can purchase ice cream at a discount of up to 67 percent.

GS25 is also running a buy-one-get-one-free event for customers who purchase its bingsu, or shaved ice, with a Samsung Card. The event is available on Friday, Saturday and Sunday.

Experts say that unmanned stores are expected to become a major trend in the food industry.

“Due to the hike in the minimum wage, small business owners are suffering from high labor costs,” Seo said. “With the unceasing development of technology, the era in which artificial intelligence serves coffee to customers is coming up quickly.”

But there are still safety issues that need to be worked out.

“In convenience stores, hand injuries are common for children due to the ice cream freezers,” Professor Ohk Kyung-young, who teaches consumer economics at Sookmyung Women's University, said. “Unmanned stores must come up with some measures to prevent these accidents.”