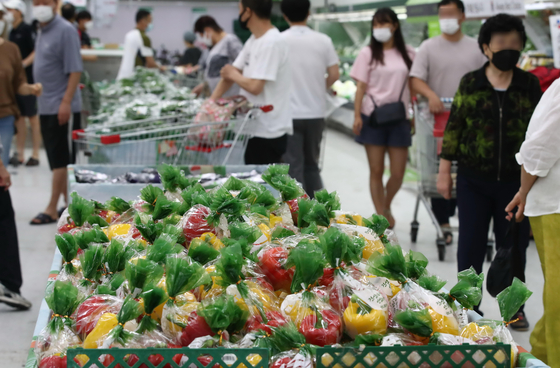 People shopping for vegetables at a discount mart in central Seoul on Monday. [YONHAP]


Vegetable prices are rising due to the long and heavy rains.

The government plans on stabilizing the prices by boosting supplies.

On Monday, the Ministry of Agriculture, Food and Rural Affairs announced it will try to stabilize the supply of vegetables consumed in the second half of the year, including radishes, Napa cabbage, lettuce, green pumpkins and perilla leaves.

The effort comes ahead of the Chuseok harvest holidays, which starts on Sept. 30, and the kimchi-making season that usually begins in November.

The ministry projects that supplies of Napa cabbages — the key ingredient for kimchi — will not be affected by the current rains as planting starts after late August. But some industry insiders believe the price of apples and pears, which are popular during the autumn harvest festival, could jump due to reduced supplies.

“The recent rise in [vegetable] prices is due to the temporarily unstable supply and demand from the continued monsoon season,” said the ministry. “Prices are expected to stabilize two to three weeks after the monsoon season ends since the growth duration [of vegetables] is short.”

Fruit prices, however, are going down slightly as rains have affected their sweetness. The week ahead of the harvest is an important period. When it rains during that period, fruit absorbs a lot of water, lowering its sweetness.

The price of peaches at a discount mart in central Seoul on Monday went down by 27 percent compared to the previous day, while watermelon prices went down 1 percent.