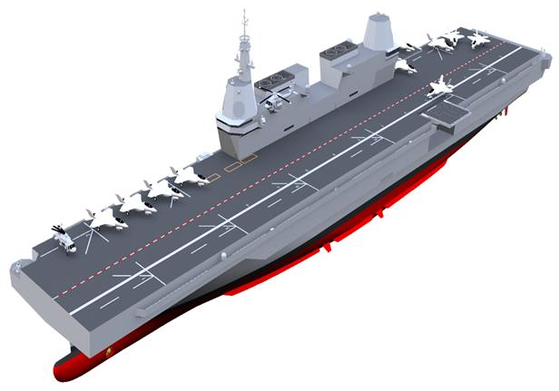 A rendering of a light aircraft carrier South Korea plans to acquire starting from 2021, as announced in a five-year plan unveiled by the Defense Ministry on Monday. [YONHAP]


South Korea will acquire a light aircraft carrier and develop a multi-tiered missile interception system as part of its 300 trillion won ($252.7 billion) defense plan for the next five years, announced Seoul’s Ministry of National Defense on Monday.

The blueprint, covering 2021 to 2025, proposes an average on-year defense spending increase of 6.1 percent, which will cost Korean taxpayers a total of 300.7 billion won for the five years, said a ministry press release.

The most ambitious of projects to be launched involves the acquisition of a light aircraft carrier capable of acting as a “multi-purpose military base capable of responding to transnational and non-military threats” in addition to serving as the headquarters of a maritime task force in the event of a military clash at sea.

The carrier will have a displacement of around 30,000 tons and will be able to host vertical take-off and landing aircraft, according to ministry officials. The project to acquire the vessel, which will make South Korea one of a handful of countries with an aircraft carrier, is set to launch next year.

Further supplementing its goal to augment maritime operations, the military also plans to develop domestically a 6,000-ton destroyer as well as a 3,600 to 4,000-ton nuclear submarine with enhanced submersion, reconnaissance and weapons capabilities.

In terms of defending its skies, Seoul is set to begin production of its much-anticipated homegrown fighter jet — known as the KF-X — which the Defense Ministry said would to make the country the 13th in the world to have a self-developed combat aircraft.

Development is being planned on long-range air-to-surface guided missiles and antiship missiles for its new jet fleet.

The KF-X project is the biggest homegrown weapons development project in Korean history, estimated to cost the government approximately 8.8 trillion won until its completion by 2026. The plane is classified as a 4.5 generation fighter that will replace the Air Force’s fleet of F-4 and F-5 fighters and complement the Korean military’s most advanced aircraft, F-35A jets bought from the United States.

Defense Ministry officials said its domestically developed AESA radar — a key piece of equipment that will allow the KF-X to detect and track multiple targets — will also be equipped on KF-16 and F-15K jets, which are the main fighting force of the Korean Air Force.

Also outlined were plans to build a network of military satellites enabled by recent revisions to missile guidelines by the United States that eliminated restrictions on South Korea’s use of solid propellants.

Seoul will develop its own rockets running on solid-fuel that will carry its satellites into space by the mid-2020s, vastly increasing its operational capacities beyond Earth, the ministry said.

Development on a miniature satellite weighing less than 100 kilograms (220 pounds) will begin in the next five years to allow dozens of such objects to be launched into low orbit, according to the military. Such satellites will be equipped with synthetic aperture radar capable of creating accurate images of targets on land, such as North Korea’s missile activities.

In cooperation with the Ministry of Science and ICT, the military also plans to develop its own global positioning system independent of the U.S.-owned GPS.

With regards to the country’s defenses closer to home, the Defense Ministry also announced a vast expansion of its missile arsenal by not only in terms of numbers, but also enhancing their missiles' accuracy, speed and destructive capacity.

Korea this year successfully tested its Hyunmoo-4 ballistic missile, capable of flying up to 800 kilometers with a payload as large as 2 tons, which the Defense Ministry called “world-class.”

Now, to bulk up the country’s defensive capabilities, the ministry plans to augment the number of antiballistic missiles at its disposal by threefold, as well as begin development of an indigenous long-range surface-to-air missile system (L-SAM) that would serve as a key component of the country’s air and missile defense architecture along with its Cheongung-II and Patriot missile systems.

Once developed, the system was likely to be rolled out in the latter part of this decade or in the early 2030s, according to officials.

Every year the Defense Ministry updates its spending plan for the next five years in tandem with ongoing developments and adjusted security priorities.

According to officials, the blueprint for 2021 to 2025 reflects the “necessary expenditures” to realize the Moon Jae-in administration’s Defense Reform 2.0 project and the successful transfer of wartime operational control from the United States to South Korea, which is planned for 2022.

In addition to its major projects, the plan also outlined continued work on upgrading individual combatants’ equipment as well as a variety of unmanned military vehicles capable of carrying out key military tasks like surveillance and communications in addition to combat roles.

“Through this intermediate plan we will build a national defense system that no one will be able to challenge […] and do our best to strongly support the Korean Peninsula peace process,” the ministry said.

Such a slogan has been a favorite of Moon administration officials, but Seoul’s ambitious arms buildup stands at odds with its simultaneous drive to engage with diplomacy with Pyongyang.