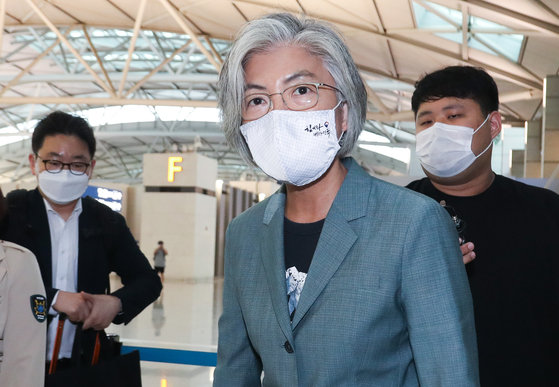 The top diplomats from the two countries held their second strategic dialogue and discussed a range of issues including a coordinated response to the new coronavirus, people-to-people exchanges and trade.

Kang kicked off her three-day trip to Berlin on Sunday, returning to Germany six months after attending the Munich Security Conference in mid-February. That visit, which also took her to Switzerland and Britain, had been her last trip abroad before the Covid-19 pandemic all but halted international travel.

There was particular interest in whether Kang would be able to get Germany to support Korea's inclusion in an expanded Group of Seven, or G7 advanced countries, as first suggested by U.S. President Donald Trump in May.

Trump invited Korea — along with Russia, Australia and India — to an expanded G7 summit that the United States hopes to host later this year. In June, Trump extended the invitation to President Moon Jae-in in a phone call. Moon accepted the offer.

The G7 members are currently Britain, Canada, France, Germany, Italy, Japan and the United States. Russia was expelled from the G8 in 2014 after its annexation of Crimea from Ukraine. Trump’s plan to expand the G7 to a G11 or G12 meeting requires approval from current members.

German Foreign Minister Maas in an interview with a local newspaper late last month said Germany is opposed to Trump’s idea to expand the G7. He said that the G7 and G20 are already sufficient, adding, “We don't need a G11 or G12."

However, the German diplomat raised his objection with regard to Russia, and didn’t specifically elaborate on Korea’s participation.

Another matter of mutual interest is the Trump administration’s plans to withdraw some 12,000 U.S. troops from Germany — about a third of the total number of soldiers stationed in the country. Trump has said the partial pullout of U.S. forces is a result of Germany not paying enough for defense. The troops are expected to be withdrawn in the coming weeks.

Seoul has been concerned that the Trump administration may pull a similar move on Korea, as Washington has pressured allies to pay more for defense and as defense cost-sharing negotiations on the upkeep of some 28,500 U.S. troops on the peninsula have stalled.

Kang was expected to ask for support for Korean Trade Minister Yoo Myung-hee's bid to become the new director general of the Geneva-based World Trade Organization (WTO), competing against candidates from seven other countries, including Britain.

Germany, who currently holds the presidency of the Council of the European Union and is a member of the UN Security Council, is an important cooperative partner to Korea, according to Seoul’s Foreign Ministry.

Kang and Maas held the first strategic dialogue in Seoul in July 2018.

The two ministers were scheduled to hold a joint press conference Monday evening.

Kang is expected to be tested for Covid-19 upon her return to Seoul, and if negative, she will be exempted from a 14-day mandatory self-quarantine as a diplomat, according to the Foreign Ministry. However, she is expected to minimize meetings and work from home as a precaution.