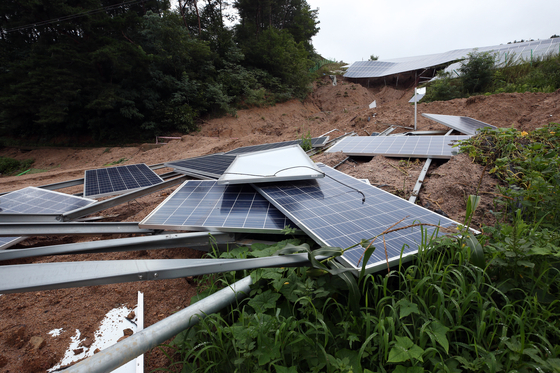 
Solar power plants, often installed on deforested mountain slopes, are suspected by some experts to be linked with more frequent occurrences of landslides recently amid torrential rainfall.

On Saturday, 16 cities and provinces nationwide were issued the country's highest landslide warning, under its four-tier advisory system, and 55 landslides were reported that day alone. On Sunday, the government issued landslide advisories in 81 cities, counties and districts nationwide.

The Korea Forest Service reported 667 landslides so far this month, as record torrential rains batter the country. During an extended monsoon season that has broken the record for average precipitation rates, the country has also seen a spike in landslides compared to recent years during the same period. And out of 12,721 solar power plants in the country, 12 locations have experienced landslides this month.

The Forest Service conducted an inspection of the solar power facilities nationwide between May 11 and June 30 and ordered 602 locations to take follow-up measures to prevent possible natural disasters. However, 12 of those plants were not able to escape damages from the recent rainfall and landslides.

Solar power facilities are generally built on inclined mountain slopes. According to the Forest Service, more than 2.327 million trees were felled over three years since 2017 in the process of installing solar power plants.

“In the process of removing trees, forklifts dig up the naturally firm soil and leave it in a crumbly condition,” said landslide expert Lee Su-gon, a former civil engineering professor at the University of Seoul. “And when rainwater enters the soil, there is a higher likelihood of it sliding down.”

With little to keep the soil in place, he explained, rainwater is more likely to cause it to slide downhill.

“Landslides occur in weak spots. If you carve out mountains, the natural balance is broken and the terrain becomes unstable.” Lee said. “The government has pushed solar power projects, so officials related to solar energy are likely to suffer in silence even while knowing of the damages. Solar power projects are extremely profitable and as landslides are a secondary problem, the issue cannot help but be neglected.”

However, other experts argue that increased solar arrays have no direct link to more frequent landslides.

The Moon Jae-in government has pushed for more solar power plants, but since 2018, the construction on new facilities has slowed as forest preservation regulations were tightened.

“It is unclear if the installation of solar power plants contributed to landslides, but if it is a dirt mountain and there is an inclination, it should be seen as a landslide hot spot,” said Park Chang-geun, a civil engineering professor at Catholic Kwandong University. “Even if there are trees, in the case of coniferous forests that have shallow roots, there is a high chance of a landslide.”

In the case the installation of solar power plants has altered the terrain, Park advised to adopt methods in order to reduce soil overflow and dispel the water such as making a waterway.

“Of some 1,000 landslide cases this year, there are just 12 so far that are related to solar power facilities," said an official with the Forest Service. "Landslides do not appear to be caused by solar plants based on the wide discrepancy between the total number of cases and the number of incidents at solar power plants.”

Instead, the official added, “As there was a high concentration of rain in a short period of time, it appears that the drainage capacity was exceeded and the retaining walls built of soil reached their limits.”

The official said that some 2,000 solar power facilities located within 300 meters (984 feet) of farmhouses and livestock facilities were inspected by Sunday.

Grow a virtual plant and Hanwha will plant a real one