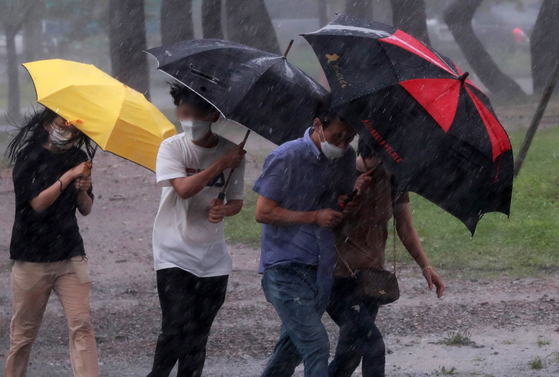 People in Busan attempt to block the wind with umbrellas Monday as Typhoon Jangmi lands in Korea’s southeastern region. No serious damage was reported. [YONHAP]

Typhoon Jangmi descended on Korea's southeast Monday amid heightened fears of more casualties and property damage during the prolonged monsoon season, but winds were much weaker than expected.

Local weather authorities said the typhoon had weakened by the time it landed on Korea’s southern coast at around 3 p.m. Monday, and grew even weaker as it moved its way northeast toward the East Sea. The Korea Meteorological Administration (KMA) expected the typhoon to reach the waters around Ulleung Island by Tuesday morning after leaving Korea’s mainland on Monday at around 6 p.m.

The Honam region of South Jeolla, North Jeolla and Gwangju, which were pounded by torrential rains in recent days and suffered widespread casualties and damage, were not directly affected by typhoon winds. Most other parts of the country were similarly spared.

The KMA warned that most of Korea would nonetheless experience rain and dark clouds on Tuesday and Wednesday.

At least 22 flights departing and arriving at Jeju International Airport were canceled Monday due to fears of the typhoon, along with 15 ferry rides linking Jeju with other parts of the country. The island also closed most of its famous hiking trails and prohibited trekkers from climbing Mount Halla.

Fishing boats all over the country’s southern coast were docked at nearby ports to shelter from the typhoon as well.

Public jitters about the typhoon had been high in Korea due to the massive destruction already caused by the ongoing monsoon season this year, which is the longest in recent history. The KMA expects the rainy weather to continue through Friday, which means the monsoon season will have lasted for 52 days.

The heavy downpour has resulted in at least 38 deaths and 12 missing since the monsoon season began on June 24, according to statistics from the Central Disaster and Safety Countermeasures Headquarters. That’s the highest since the summer of 2011, when 77 people died or went missing in torrential rains and landslides.

Korea’s southwestern Honam region was the most severely hit over the weekend, with officials there confirming Monday that at least 12 people died, one person went missing and an estimated 5,000 people have been displaced from their homes since last Friday. Among the displaced, about 2,000 were residents near Seomjin River and Yeongsan River.

Some 1,155 houses in the province of South Jeolla were either submerged or damaged, the most coming from the city of Gurye, with 472 such houses. Farmlands have been ruined, and across 11 cities and counties in South Jeolla, some 132,000 chickens and 85,000 ducks have died.

In the metropolitan city of Gwangju, 400 people across 267 households were displaced, and 326 houses and some 300 cars were reported to have been sunk underwater. In North Jeolla, 1,702 people were forced to temporarily leave their homes due to flooding, officials said.

Authorities in Chuncheon, Gangwon, who are on a search for missing bodies following an incident at Uiam Dam last week, said Monday they discovered one dead body nearly 2 kilometers (1.2 miles) from the accident scene.

Three boats carrying eight people capsized near the dam last Thursday during work, and only two survived. Four dead bodies have been retrieved, and two who worked for the Chuncheon city government are still unaccounted for.