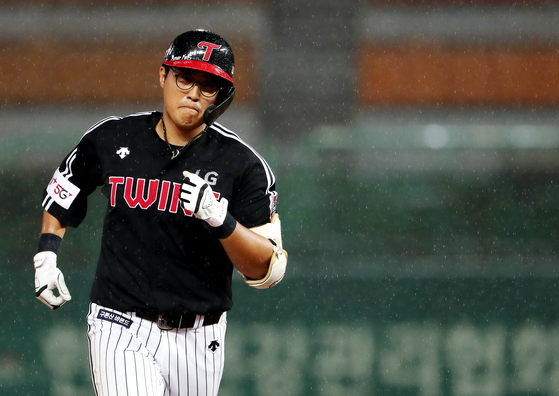 Chae Eun-seong of the LG Twins rounds the bases after hitting a three-run home run during a game against the SK Wyverns at Munhak Baseball Stadium in Incheon on July 29. [YONHAP]


Up until mid-July, LG Twins outfielder Chae Eun-seong was struggling with such a serious slump that he volunteered to be excluded from the starting entry and head down to the Futures League.

His 2020 season didn't get off to a bad start, as he had a batting average of 0.305 with five home runs and 29 RBIs by June 21, when things took a turn for the worse when he injured his ankle. A lot of Twins fans were waiting for Chae’s return, but when he finally came back June 30, his slump began.

From June 30 to July 15, Chae had a 0.093 batting average. Chae wasn't the only one struggling — the Twins were missing the a number of of their starting players due to injuries at the time and only picked up four wins, eight losses and one draw.

As Chae had a hard time both mentally and physically, he decided to head down to the Futures League after talking with the coaching staff, as he thought that he wasn't helping the team.

After spending two weeks with the Twins’ Futures League team, Chae finally made his return on July 28, during a game against the SK Wyverns. This time, he finally seems to have found his pace as he added eight RBIs in that one game. Eight RBIs in a single game is good enough to put Chae straight in at No. 2 on the all-time KBO ranking of the most RBIs in a single game. The current record is held by Park Sok-min of the NC Dinos, who picked up nine RBIs back when he played for the Samsung Lions.

Since that game, Chae has managed to add an RBI or more for seven straight games. Thanks to Chae’s improvement and the return of the team's injured players, the Twins are now back on form as they are ranked fourth in the regular season standing as of Monday.

Below are edited excerpts from the interview with Chae.


Q. You returned to the Twins in the last week of July and your slump ended. How did that happen?

A. Manager Ryu Joong-il and batting coach Lee Byung-kyu gave me some time. In the end it turned out to be a great opportunity. If I still wasn't performing as well as I should be, then [this time in the Futures League] could've turned out to be a huge minus for me and for the team. The regular season has just passed it's the halfway point, so I think it's time for me to play better to help the team more.


Q. Would you say your batting is perfectly back to where it should be now?

A. I think it's gotten a lot better than before I went down to the Futures League.


Q. The way you hold your bat has changed. How has it changed?

A. Yes, I have made little changes. Before, I would tense earlier than I should in the batter's box. But now, I am doing the preparation, where both my arms that are holding my bat can slowly get into the rhythm of my swing. To be honest, I have a lot of strength in my lower body and that can look a little uncomfortable. I should've slowly adapted my stance, but I couldn't. When I wasn't batting well, it felt like my upper and lower body were moving separately. That's why I changed my setup to be more comfortable. It's not a big difference, but in baseball little changes can make big differences.


Q. What kind of process did you go through to make improvements?


Q. What is the story behind you heading down to the Futures League team?

A. When I was struggling, our coaching staff asked me what I wanted to do. Heading down to the Futures League could look like I'm running away and another player could steal my spot. But at that time I wasn't helping the team at all. I needed some time to figure things out. Since I thought that I needed to find a way to help the team, I decided to head down.


Q. Throughout the time you struggled, manager Ryu Joong-il continuously trusted you and gave you chances. How do you feel?

A. I am very thankful, but at the same time I feel very sorry to our manager. Since he gave me all those chances because he trusted me, I want to work harder and repay that trust.


Q. You started batting well when the KBO started to allow fans into the stadium. How did it feel to be playing better in front of the fans?

A. I was called up to the entry on July 28, during a game against the SK Wyverns. That was the second day that fans were allowed inside stadiums. It was an away game, but it felt like an opening game so I was really nervous. It was definitely a lot more fun with the fans as they came out to cheer along and clapped for us. I was able to concentrate a lot better and realize that the players get the energy from the fans.


Q. What is your goal for the season?

A. Our team’s goal is to finish in the top half of the table. I will work hard to fulfill my role so we can achieve the goal that the fans want.