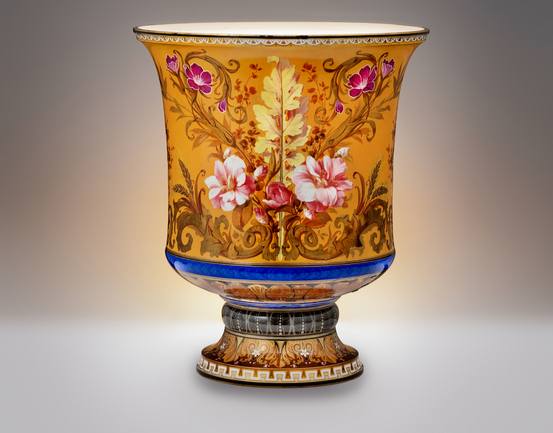 The White Porcelain ’Salamis“ Vase with Polychrome Decoration that was given to King Gojong by Marie François Sadi Carnot (1837-94), then president of France, in 1888 to celebrate the signing of the Korea-France Treaty of 1886. [NATIONAL PALACE MUSEUM OF KOREA]


Getting out your valuable china from the cupboards to serve guests has long been regarded as a sign of respect and welcome in most homes.

When Korea’s Joseon Dynasty (1392-1910) opened its ports in 1876 and foreigners began to arrive, the royal court started to pay extra attention to how to better accommodate foreign diplomats in Korea, which included preparing proper porcelain to serve food that would be agreeable to their palates.

In efforts to build international relations and communicate with the wider world, the royal court of the Joseon Dynasty frequently held Western-style banquets and began adopting Western-style architecture and interior designs to meet international diplomatic standards.

To serve Western food, the Joseon court made special orders of European ceramic wares that included the court’s signature emblem of a plum blossom flower printed on each item. Although traditional Korean dining rules still existed, at least during such Western-style banquets, everyone, regardless of their rank or gender could sit down together at one long table and eat using Western-style dinnerware.

It could have been interpreted that King Gojong (1852-1919) was an extravagant ruler to make such purchases when the fate of the country was at stake. But today, many historians believe that such actions were a symbol of the dynasty’s efforts to navigate pressing domestic and foreign situations through diplomacy.

This Western-style tableware, which is a collection of the National Palace Museum of Korea, is being exhibited to the public for the first time. The museum decided to put on a special exhibition to showcase an array of Western-style porcelain used in the Joseon royal court after studying it for three years.

“Even today, the need for diplomatic communication to address complex international and domestic issues remains,” said Kim Dong-young, director of the museum. “And I can see how King Gojong tried to initiate a conversation and understand foreigners over such dinner tables. This exhibition is particularly meaningful in that the museum is bringing together and presenting to the public for the first time its wealth of royal ceramics from the modern era.”

About 400 items are being showcased at the “New Era of the Royal Ceramics: Embracing the Western-Style Porcelain in the Joseon Royal Court” exhibition, which will run through Oct. 4 at the National Palace Museum of Korea located next to the Gyeongbok Palace in central Seoul.

In efforts to showcase the transformation, the first part of the exhibit showcases traditional ceramics that were widely used in the royal court before the introduction of the European ones. Traditional blue-and-white porcelain wares were large in number during the late Joseon period until the opening of ports.

The second part explores the background of the introduction of European ceramics to the Joseon royal court during the time when new cultural elements were being embraced following the opening of ports.

“It wasn’t as simple as ‘oh, let’s import European ceramics to welcome the foreign diplomats,’” said Kwak Hee-won, a ceramic researcher and the curator of the exhibition. “Japan forced Joseon to conclude the Korean-Japan Treaty in 1896, which marked a dramatic change in Joseon diplomatic policies. In order to manage this new state of international affairs and establish a solid footing as a sovereign nation, Joseon had to reinvent itself as a modern state that meets Western standards.” 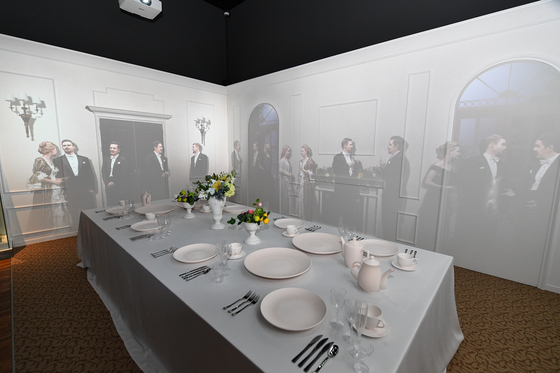 The special exhibit, "New Era of the Royal Ceramics: Embracing the Western-style Porcelain in the Joseon Royal Court" will run until Oct. 4 at the National Palace Museum of Korea. [NATIONAL PALACE MUSEUM OF KOREA] 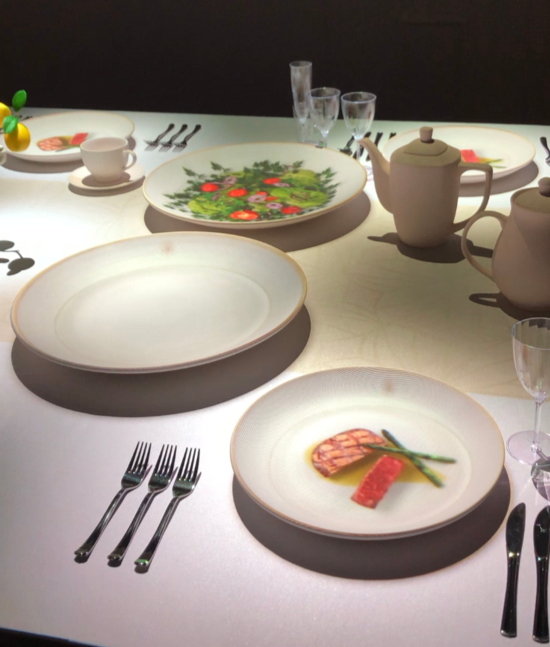 Using projection media, the exhibit visualizes what kind of food the foreign diplomats and the royal court enjoyed in Deoksu Palace. [YIM SEUNG-HYE]


Since then, Joseon made efforts to learn about the systems and culture of other countries by dispatching delegations abroad as well as participating in world expositions, and ultimately adopting the modern technologies that these delegations brought back with the aim of becoming a modern state recognized by international society.

Electric lamps are example of such modern technologies. Around 1911, electric lamps were installed inside most palaces. Decorative lampshades were also produced, which can be seen in the second section of the exhibit. 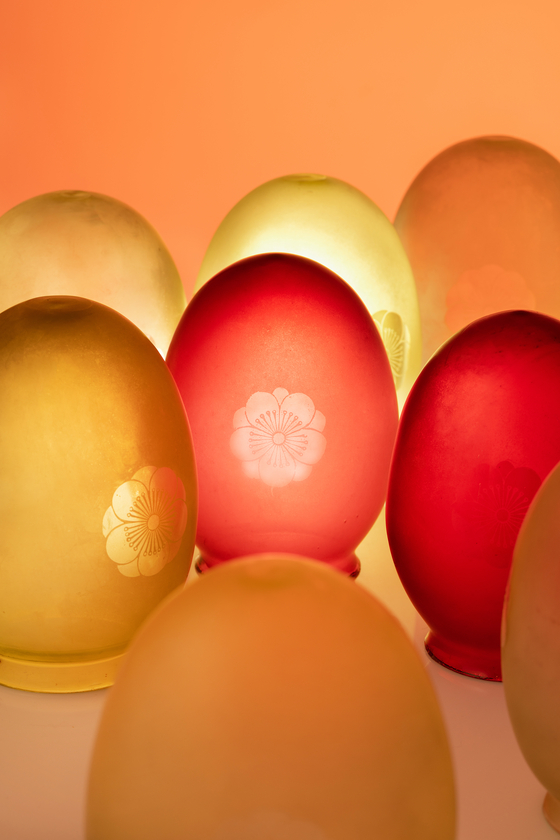 Lampshades with plum blossom marks show they were special orders of the royal court. [NATIONAL PALACE MUSEUM OF KOREA]


The highlight piece of the exhibition is displayed in the third section: White Porcelain “Salamis” Vase with Polychrome Decoration.

This large colorful vase was a gift from Marie François Sadi Carnot (1837-94), then president of France, to King Gojong in 1888 to celebrate the signing of the Korea-France Treaty of 1886.

France, which to this day still takes great pride in its arts, offered a gift of ceramics to Joseon to commemorate the establishment of diplomatic relations between the two countries and the appointment of its first consul, Victor Collin de Plancy (1853-1922).

In fact, it’s not only the White Porcelain “Salamis” Vase with Polychrome Decoration that President Carnot had presented. He had also sent a set of two blue Clodion Vases. But where are they?

Before the museum’s researchers launched their studies into the Western ceramics used in the royal court of the Joseon Dynasty, there was no clue as to the whereabouts of the two Clodion Vases.


“According to the Sèvres National Manufactory of France’s forwarding history record of August 1888, which produced the vases, it states that France had sent two Clodion Vases and one Salamis Vase as a gift to the King of Joseon,” said Kwak. “Unfortunately, they were not in the National Palace Museum of Korea’s storage like the Salamis Vase.”

The museum had assumed the vases were lost. But Kwak and the other researchers decided to try and track them down and to their surprise, discovered them displayed at the French restaurant Le Trianon, of the Grand Prince Hotel Akasaka in Tokyo, Japan.

“We noticed the Clodion Vases in the family photo taken in 1918 inside the Seokjojeon, the Western-style building in Deoksu Palace,” said Kwak. “The vases were featured again in a photograph taken around the 1950s inside King Yeongchin’s residence [the seventh son of Gojong and the last crown prince of Joseon] in Tokyo, Japan.” 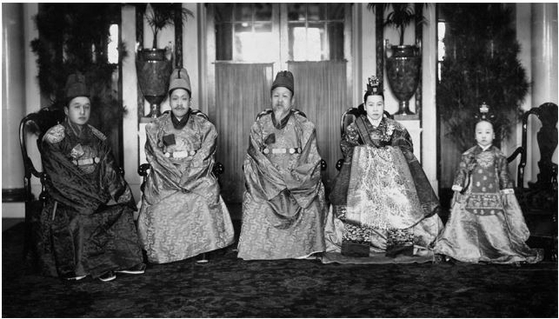 Family picture of Gojong taken in 1918 inside the Seokjojeon in Deoksu Palace. [SEOUL NATIONAL UNIVERSITY MUSEUM]


According to Kwak, some furniture inside Seokjojeon was taken to Japan in 1930 when the construction of King Yeongchin’s Akasaka residence was completed. “The Clodion Vases must have left the palace during that time,” Kwak said.

After Korea was liberated from Japan, King Yeongchin’s residence was sold to Yasujiro Tsutsumi, the founder of Seibu Railway Co., in 1954. A year later, he turned the property into the Akasaka Prince Hotel with 51 guest rooms. The building continued to be used as a hotel until 1983, but after establishing a high-rise building next to it, the Seibu Railway — which owns the property — decided to preserve it and call it the Old Guest House. 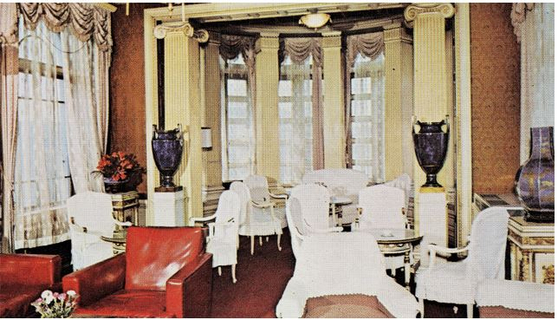 The two Clodion Vases inside the French restaurant in the Old Guest House of the Grand Prince Hotel Akasaka, in Tokyo, Japan. [NATIONAL PALACE MUSEUM OF KOREA]


“I got goose bumps when I saw the Clodion Vases at the restaurant with my own eyes,” said Kwak, adding that there was not enough time to hold talks on bringing them back or at least temporarily borrowing the vases for the exhibition. “But we are pleased that we finally got to know the whereabouts of our valuable cultural heritage,” she added.

Two Goryeo celadon bowls dating to the 12th century and a pair of banhwa, a gold-covered flower tree pot ornament, were also some of the relics that failed to make it to the exhibit.

After receiving the gifts from the French president, King Gojong reciprocated with the two sets of Korean art pieces. The celadon bowls belong to the Musée national de céramique de Sèvres while the banhwa are housed at the Guimet National Museum of Asian Art.

“The museums were more than happy to send the relics with some of their researchers, but due to the coronavirus pandemic we had to make last minute cancellations,” said Kwak.

“This was the first time for Joseon to exchange diplomatic gifts of ceramics with the West. The gifts of ceramics symbolically reflect Joseon’s transition into a modern state in the face of new diplomatic relations,” said Chung Jae-suk, head of the Cultural Heritage Administration.

“We’ll support the museum so that the relics that couldn’t make it for this exhibition can still come to Korea in the near future and hold a solo exhibition for them so that the public can take a closer look at them as well.”