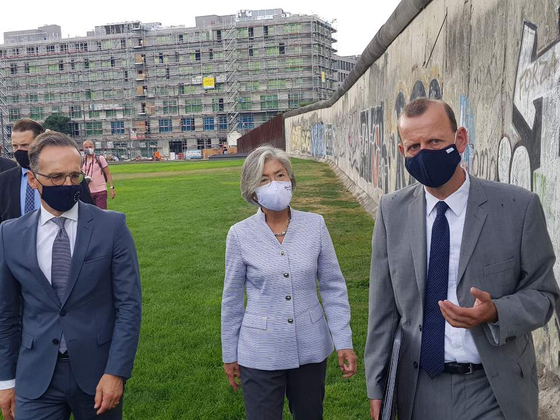 Maas said in a joint press conference with Korean Foreign Minister Kang Kyung-wha at the Berlin Wall Memorial, "We very much welcome South Korea's participation in the G7 summit," calling Korea an "important" country in the world and a valued partner.

However, he stressed Germany is opposed to Russia rejoining an expanded G7 summit, demanding the country resolve the Crimea annexation issue and tensions with Ukraine first.

U.S. President Donald Trump first floated the idea of an expanded G7 summit in May, which was met with skepticism by some countries. Trump invited U.S. allies Korea, Australia and India, along with former member of the G8 Russia, to an expanded G7 summit that the United States hopes to host later this year.

While Trump initially called for an in-person G7 meeting to take place next month in the United States, on Monday he indicated such a summit could be postponed until after the U.S. presidential election in November.

Kang likewise said in the press conference that Korea “welcomes the United States’ invitation to the G7 and actively consented.” However, she said that the issue of the expansion of the G7 summit, as also mentioned by the German foreign minister, “is a situation to be discussed and advanced within the international framework.”

Kang assured that “Korea has the capability to greatly contribute" to the agenda set by the host country of the G7.

Kang and Maas earlier Monday held their second strategic dialogue and discussed a coordinated response to the coronavirus pandemic and economic recovery, key global matters and the situation on the Korean Peninsula, according to Seoul’s Foreign Ministry.

The two sides also discussed how to minimize the impact on businesses, students, humanitarian exchanges and essential travel between the two countries amid the Covid-19 pandemic.

The two sides discussed a joint commitment to both disarmament and strengthening multilateralism with a common goal of strengthening the rules-based international order, according to the German Federal Foreign Office.

In the press conference, Kang said that Seoul is closely following Washington’s planned drawing down of U.S. troops in Germany because "U.S. security policy is a very important matter" to both countries, but stressed that “there has been no discussion whatsoever” of any American troop reduction in Korea.


Kang made her first overseas trip in six months to Germany — a country she also visited in February — and the G7 expansion issue was of particular interest to Seoul as a summit hosted by the United States was potentially being considered for September before or after the new UN General Assembly session.


But in an interview with a local newspaper last month, Maas said Germany is opposed to Trump’s idea to expand the G7 summit, saying, “We don't need a G11 or G12,” specifically raising his objection to Russia.

Kang’s three-day visit to Berlin, which wrapped up Tuesday, was an opportunity to gain Germany’s endorsement for South Korea’s participation in an expanded G7 format.


However, Trump said Monday that he would like to host a G7 meeting after the presidential election on Nov. 3, if he is reelected.

"I am much more inclined to do it sometime after the election,” Trump said in a press conference at the White House. “We were going to do it in September; they'd like to do it.”


He suggested that the G7 meeting could be in person or through a teleconference but suggested to “do it sometime after the election,” when there’s more time to think about it, because “it's very important.”


The G7 summit was initially scheduled to be held at Camp David in June, an idea that German Chancellor Angela Merkel rejected because of the coronavirus pandemic. Trump in late May proposed holding an in-person expanded summit in the fall, calling the existing G7 “a very outdated group of countries.”

The G7 members are Britain, Canada, France, Germany, Italy, Japan and the United States. Russia was expelled from the G8 in 2014 after its annexation of Crimea from Ukraine. Trump’s plan to expand the G7 to a G11 or G12 meeting requires approval from current members. It is unclear if this would be a one-time invitation or a permanent expansion.

In June, President Moon Jae-in accepted an invitation by Trump over the phone to partake in such an expanded G7 summit.


When asked if he would invite Russian President Vladimir Putin, Trump replied, “I don’t know, but we have invited a number of people to the meeting.”

He added, "Some people have already accepted, but we're going to be doing it after the election,” adding that “it's a better, calmer atmosphere to have a G7."


On Trump’s plans to postpone the G7 summit, Kim In-chul, spokesman for Seoul’s Foreign Ministry, said in a press briefing Tuesday, “The remarks were made by the leader of the hosting nation. When we receive an official notification, we can make a decision then.”