Korea faces the smallest contraction in economic growth among advanced countries this year, the Organisation for Economic Cooperation and Development (OECD) said Tuesday, after containing the coronavirus without lockdowns.

According to the OECD's Economic Survey of Korea, the country’s GDP will fall 0.8 percent in 2020, an improvement from the 1.2-percent downturn forecast in June. 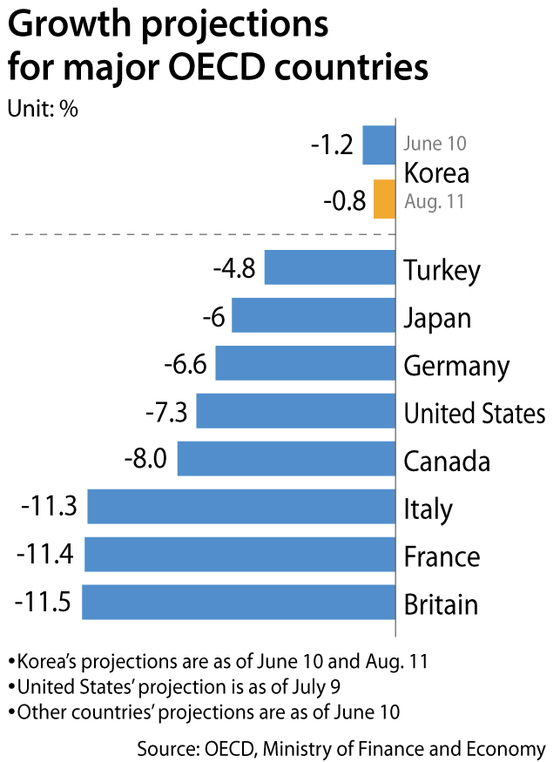 Korea will have the smallest contraction among the 37 advanced economies that are members of the Paris-based organization. Korea is also the first country whose growth projection was upgraded by the OECD since the Covid-19 pandemic.

Average growth for the year for OECD members is forecast at negative 7.5 percent. The U.S. economy will shrink 7.3 percent and Japan's 6 percent. Germany will face a 6.6 percent contraction.

The second best performer is Turkey, where the economy is projected to shrink 4.8 percent.

“The Survey projects a rebound in activity after the sizeable drop in the first half of 2020, with a 0.8 percent contraction in 2020 and 3.1 percent growth in 2021, absent a resurgence of the pandemic,” the OECD said in a press release.

“While domestic-oriented activity is normalizing gradually, the global recession is holding back exports and investment," it said. “A second global wave of infections would delay the recovery: GDP would then contract by 2 percent in 2020, and growth reach only 1.4 percent in 2021.”

While Korea is experiencing the shallowest recession thanks to the government’s swift measures, the report recommended Seoul to continue to give economic support to households and businesses until a recovery is fully underway.

It also said the government must ensure its own long-term fiscal sustainability.

Total investment is expected to expand by 2.9 percent, up from an earlier forecast of a 0.7 percent decrease.

Exports, however, are expected to shrink 5.7 percent this year. In June, the OECD estimated that exports would fall 2.6 percent.

The OECD expects that Korea will see a fiscal deficit this year, and the amount will be larger if a second wave of the pandemic hits.

According to the Ministry of Finance and Economy, the fiscal deficit for the first half of this year is 110.5 trillion won ($93.3 billion), the largest ever.

The Blue House was pleased with the OECD report. Presidential spokesman Kang Min-seok said the government will take its recommendations seriously.

“Since the coronavirus outbreak, the government and the people put all efforts into countering the pandemic for the past six months,” said Kang. “The people were patient and supported preventive measures, while the government worked hard to fight the pandemic without lockdowns of the borders and regions.

“We also speedily implemented an expansionary fiscal policy to minimize damage to our economy and pushed forward the Korean New Deal project to create opportunity from crisis,” Kang said.