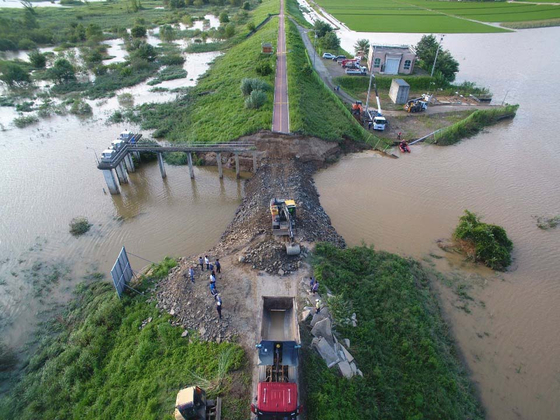 Restoration begins Monday after part of a dike along the Nakdong River in Changnyeong County, South Gyeongsang, was destroyed by heavy rainfalls. [YONHAP]


A brewing political controversy over the Lee Myung-bak administration's river restoration project boiled over Monday, after President Moon Jae-in ordered an evaluation of its effectiveness in flood prevention.

In his meeting with senior secretaries on Monday, Moon said ongoing downpours are “an opportunity to conduct an empirical analysis to measure the effectiveness of the reservoirs created through the four major rivers projects to control floods.”

Moon’s order to verify the project’s effectiveness came as the main opposition party praised the former president’s signature program for having reduced the flood damages. Moon and his ruling Democratic Party (DP) have criticized the program since it began in 2009.

Known as the “Four Major Rivers Restoration Project,” the multipurpose “green growth” program on the Han, Nakdong, Geum and Yeongsan rivers was pushed forward by the Lee administration in the aftermath of the global financial crisis. Through the project, reservoirs were built along the four rivers to supply water for farming, and river bottoms were dredged for flood prevention. After spending some 22 trillion won ($18.6 billion), the project was completed in October 2011.

As the country has suffered dozens of casualties and widespread property damage from a record-breaking monsoon season, politicians from the United Future Party (UFP) praised the project, saying it had helped to prevent floods in major rivers.

Rep. Chung Jin-suk, who served as senior secretary for political affairs in the Lee Blue House, said the project should have been expanded to smaller streams nationwide. “If it had been done, we could have prevented the current disasters more effectively,” he wrote in a Facebook post.

In his own Facebook post, Rep. Ha Tae-keung said the Democratic Party (DP) had opposed the project just because it was pushed forward by Lee.

After Moon won the presidency, the government even attempted to destroy the reservoirs, he said.

“Now, they are blaming climate change,” he said. “I think this administration is really foolish.”

After Moon issued an order to examine the effectiveness of the project, Rep. Joo Ho-young, floor leader of the UFP, said the matter should be handled by experts, not as the subject of a political confrontation. “We need to listen to the experts’ opinions to improve the country’s flood control capacity as soon as possible,” he said. “Or else we will face repeated disasters.”

The DP said the UFP was praising the river projects to attack the government.

“I am speechless about the UFP’s argument that recent floods could have been prevented if a similar project was carried out at the Seomjin River,” Rep. Youn Kun-young of the DP wrote on Facebook. “Disasters are still ongoing, but the opposition party already started blaming us. Are they insane? We are working hard to combat the floods, but they are hindering us from behind.” 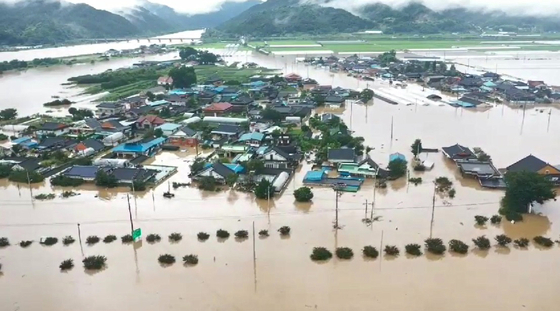 A village along the Seomjin River in Namwon, North Joella, was flooded on Saturday after a nearby dike collapsed. Over 300 residents lost their homes. [YONHAP]


Rep. Kim Jin-ae, an architect-turned-lawmaker from the Open Minjoo Party, said in a radio interview on Tuesday that the matter must be handled based on science, not politics.

It remains to be seen if a politically unbiased study is possible.

During the Park Geun-hye administration, an evaluation committee from the Prime Minister’s Office conducted a study and announced in December 2014 that floods were prevented in 93.7 percent of the waterside areas along the four rivers.

After Moon took office, he ordered a special audit into the project. In July 2018, the Board of Audit and Inspection (BAI) said the project had “zero” value in flood prevention.

“The National Assembly, not the government, should conduct an audit this time,” said Kim Hyung-joon, a political science professor of Myongji University.

“In the United States, congressional hearings on policies are frequently held ... Since a controversy over political neutrality is unavoidable, it would be better for the ruling and opposition parties to conduct a hearing, where foreign experts are invited, to verify the efficacy of the project.”