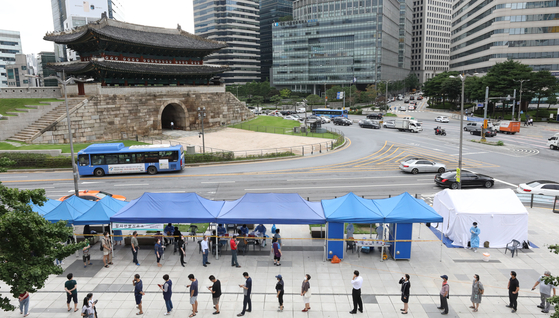 People line up at a Covid-19 testing site in Namdaemun Market, central Seoul, on Tuesday, after health authorities reported nine infections from merchants there. [NEWS1]

A merchant at one of the most popular alleys in Seoul’s Namdaemun Market has been diagnosed with the coronavirus, local health officials announced Tuesday, stoking fears of a burgeoning cluster after eight cases were previously traced to an obscure shopping building nearby.

That brings total infections at the Namdaemun Market in Jung District, central Seoul, to nine — all merchants. No customer who established contact with them has tested positive so far.

Health authorities identified the latest patient as a resident of Seocho District, southern Seoul, who works at the C Building in the Jungang Shopping Center.

The patient had dinner with an infected person on July 30, officials said — one of eight people at the Namdaemun Market’s Kennedy Complex building who had tested positive for the coronavirus recently.

It wasn’t until the Kennedy Complex merchant tested positive on Sunday that the Jungang Shopping Center merchant got tested and was diagnosed on Monday, despite being asymptomatic.

Unlike the Kennedy Complex building, which has about 20 merchants, the Jungang Shopping Center's C Building alone has nearly 565 merchants.

Health officials Tuesday warned anyone who visited the Jungang Shopping Center last Saturday or Sunday to get tested for the coronavirus.

The cluster at Korea’s largest traditional market first emerged last Thursday, when a merchant from the Kennedy Complex was diagnosed with the virus after coming into contact with an infected patient at her church in Goyang, Gyeonggi.

All 20 people who work inside the same building as the churchgoer were subsequently tested, and seven turned out positive Sunday. The rest were negative. 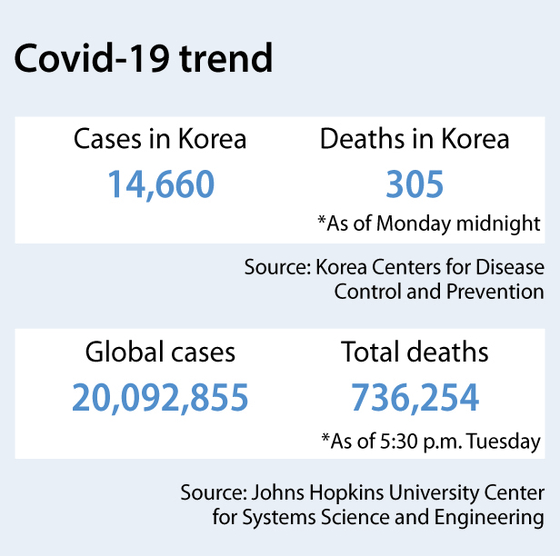 Officials had earlier believed the cluster wouldn’t grow significantly, given that the Kennedy Complex is a less-visited part of the market. One sticking point, however, was that customers there usually pay in cash, meaning authorities can’t track recent buyers through credit card transactions.

A makeshift Covid-19 testing site was set up at Namdaemun Market on Monday morning, and officials said testing will be offered through the weekend.

Including the latest infection at the market, the Korea Centers for Disease Control and Prevention (KCDC) announced Tuesday morning that 34 people were newly diagnosed with the coronavirus on Monday nationwide, including 11 imported cases.

Of the 23 local infections, nine live in Busan, seven in Gyeonggi, six in Seoul and one in South Chungcheong, the KCDC said. Of the imported cases, five were from the United States, three were from Kazakhstan and one each came from the Philippines, Moldova and Algeria.

No Covid-19 patients died Monday, and 71 recovered. As of Monday at midnight, a total of 305 people had died in Korea, while 13,729 people had been declared fully recovered.

In Busan, several coronavirus infections were traced to a woman in her 50s who appears to have gotten infected during her recent visit to Seoul. Some other cases have been connected to a Russian ship.

‘Tis the season to social distance

Relief on the way

Namdaemun struggles to catch up with a contactless world