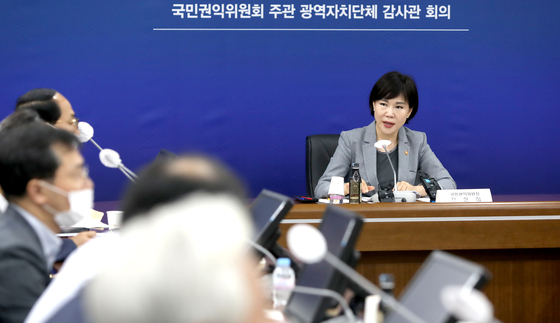 Jeon Hyun-heui, chairperson of Korea’s anticorruption watchdog, the Anti-Corruption and Civil Rights Commission (ACRC), presides over a meeting Tuesday at the ACRC in Sejong City to discuss ways to promote integrity in local government offices. [YONHAP]

In its latest economic survey of Korea, the Organisation for Economic Cooperation and Development (OECD) said Korea has “stepped up” its fight against corruption recently, but added that “challenges remain.”

The biannual report from the OECD’s Economic and Development Review Committee was released earlier this month and touted by the Korean government’s Anti-Corruption and Civil Rights Commission (ACRC) on Tuesday as a major step toward achieving a corruption-free nation.

“Corruption of low-level public officials has been almost eradicated,” read the OECD paper, “in particular thanks to the establishment of the Korea Independent Commission Against Corruption (KICAC) in 2002, which was integrated in a broader agency, the Anti-Corruption and Civil Rights Commission (ACRC) in 2008.”

The report highlighted efforts by the ACRC to reinforce protections for whistleblowers, and also noted that a number of presidential pardons were denied to politicians, business executives and public officials involved in corruption.

A special investigation unit in the works, which is tasked with looking into wrongdoing by high-ranking government officials, was also highlighted as part of Korea’s efforts to root out corruption in society.

The CPI annually ranks countries by their perceived levels of public sector corruption. The higher the rank, the less the country’s public sector is perceived to be corrupt. Korea ranked 39th out of 180 nations in the latest CPI index revealed last January, and 27th out of 36 nations that comprise the OECD.

It continued that “coordination mechanisms” between Korea’s police and prosecutors and reporting requirements of suspected bribery to relevant law enforcement agencies also “need to be clarified.”

The OECD report was released nearly four months ahead of Korea’s scheduled hosting of the largest anticorruption forum in the world, the International Anti-Corruption Conference (IACC), which is slated for Dec. 1 to 4 at Bexco in Busan.

The 19th edition of the biannual forum was originally scheduled to take place from June 2 to 5 at Coex in Gangnam District, southern Seoul, but was postponed due to the coronavirus pandemic.