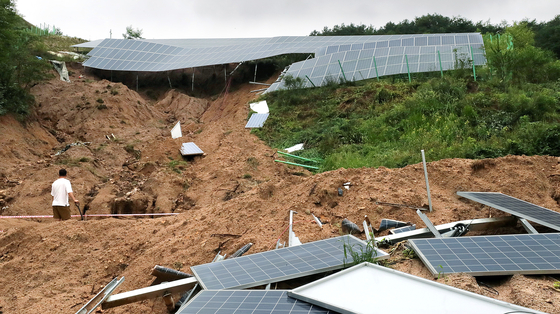 Recovery work after a landslide amid heavy rainfall takes place at a solar power plant in Daerang-dong in Jecheon, North Chungcheong, on Tuesday. [NEWS1]


Residents in rural areas are blaming solar power plants for recent landslides amid heavy rainfall, saying that cutting down forests to build them in mountainous areas contributed to soil erosion and flooding in their neighborhoods.

Gongjeon-ri, a rural village in Jecheon, North Chungcheong, was one of the areas struck by a landslide Monday amid heavy rainfall.

The village is located at the foot of a mountain with a large-scale solar power station built in 2018, with a cluster of six 200-kilowatt facilities that cover about 30,000 square meters (323,000 square feet) of land.

“They carved away at a fine mountain to build a solar power plant and after heavy rainfall, the soil and mud slid down,” said one resident of the village, a 69-year-old surnamed Ahn. “I lived here all my life and never experienced such flooding before.”

Solar panels are often installed on mountain slopes to receive direct sunlight for extended periods of time. Mountain land is also relatively cheaper than flat land. Trees on the mountainside were cut down to install hundreds of solar panels at the facility near Gongjeon-ri.

A local official who inspected the solar power plant Monday said the situation was even worse after torrential rainfall last week.

“The road is at least cleared now so we can pass by, but during the rainfall last week, the soil was piled up to the point where we couldn’t even enter,” the official said.

Multiple solar power plants installed on mountain slopes have been left in shambles following the recent rain. Solar panels were turned over, while the rainwater and soil washed reached a town 400 meters (1312 feet) away from the facility.

“It seems like the large-scale civil engineering project carried out in building the solar power plant brought about the landslide. From the perspective of the residents, we cannot help but feel resentful of the solar power plant," said local resident Ahn Byung-dong, 63.

According to the Korea Forest Service, there are 12,721 solar power plants in the country, of which 12 locations experienced landslides in August.

However, the Forest Service has pushed back against public criticism that solar power plants are contributing to the increased landslides and said Monday that out of a total of 1,079 nationwide instances in which landslides caused damage recorded since June, just 1.1 percent were linked to solar power facilities located in mountainous areas. Of the areas that have experienced damage from landslides, just 12 locations, or 0.09 percent, have solar power plants.

But the Forest Service has previously acknowledged that solar power plants cause landslides. In a press release dated April 30, 2018, it wrote that there is “serious concern” over solar power plants leading to landslides, adding that the forestry agency planned to take countermeasures.

“The felling of trees that have been growing for decades to build solar power plants raises concerns of destruction of landscapes, damage to mountainsides, landslides and soil erosion,” the press release stated.

“It is evident that there have been increased mudslides because of erosion of soil even in solar power plants built in mountain areas where damages have not being reported," said Lee Su-gon, a landslide expert and former civil engineering professor at the University of Seoul. “Trees and grass prevent soil erosion and soak up rainwater, helping to prevent landslides. If you carve away mountains and build artificial solar power plants, the water volume that flows underground is decreased and the water flow on the surface of the earth increases.”

Lee noted that North Korea has reclaimed mountain land in an attempt to resolve its food shortage, but the practice was also linked to massive flooding in the country.

“If there is a continuous erosion of mountains, there is a high likelihood that soil will collect in streams and rivers, which will lead to higher water levels and more frequent flooding in the long run,” Lee said.

Another 800-kilowatt solar power plant in Daerang-dong in Jecheon also crumbled recently due to heavy rainfall. Dozens of solar panels and soil drifted onto the farmland below.

Lee Hae-young, an energy management official of the Jecheon city government, said that a “significant amount” of soil from the solar power facility had spilled over.

A man surnamed Song, 53, is the owner of another solar power facility in Jecheon, located on a mountain in Angseong-myeon. That facility did not experience a landslide, and Song said that building deep embankments and covering the ground with tarps did not help much in keeping solar panels from falling over.

“What did keep the solar panels from falling over is building a lot of ditches,” he said.

“It is true that solar power plants are vulnerable to landslides, but in the case of this monsoon season, the damage is because of the high precipitation rate for an extended period of time," said a North Chungcheong provincial official.

Moon Chang-yeol, a civil engineering professor at Kangwon National University, called for the strengthening of reinforcement standards and supplementing current regulations on the facilities.

“There is a possibility that cutting down trees for solar power plants on mountain areas can bring about landslides, but the situation in each region may differ based on the drainage system,” Moon said.

Grow a virtual plant and Hanwha will plant a real one