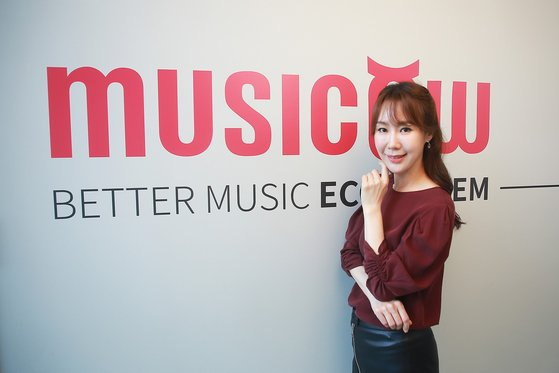 Jung Hyun-kyung, co-CEO of Musicow, poses for a photo. [MUSICOW]


Owning a stake in songs by Wanna One, Twice, Big Bang, 2NE1 or Apink is fun for fans and can be profitable for investors, and as a result the market in K-pop copyrights is booming.

Founded in 2017, Musicow is the country’s first copyright sharing platform.

Under the slogan “Music becomes CashCow," it allows users to buy a fractional ownership of the copyrights of songs. Based on agreements with original creators, Musicow puts a portion of the song’s intellectual property up for auction. Bidding generally lasts for about six days, and the final bidder receives royalties based on the number of shares.

Music copyrights generally last for 70 years following the death of the creator, with a royalty stream that can fluctuate greatly depending upon popularity.

Twenty-year-old Park Ji-min started purchasing song copyright shares early this year, buying a stake in “Tears” by So Chan-whee and “Endless” by Flower. With the shares, he's earning a 9 percent return.

"Music investment is easier than real estate or stock investment,” Park said. “It is very attractive as I can receive the royalties every month.”

The number of registered users on Musicow was only about 50,000 in December, but the total hit 115,000 as of August. Transaction volume jumped 540 percent last year compared to a year earlier.

Transactions can be made in two different ways — auctions and trades between individual users. Individuals who bid on songs can resell those to other users.


As of now, some 550 songs have been trading on the platform. The songs span generations and include those by Cool and Byun Jin-sub, who were popular in the 1990s, and those by recent trendy K-pop idols including Twice and Wanna One.

According to Musicow, a person who owns a total of 10 shares of the Ahola copyright received 2,930 won of royalties last month.

A 39-year-old working at a local securities brokerage became a Musicow user last year. His accumulated volume of transactions reached 120 million won as of this month.

At first, he purchased some blue chips, such as popular songs by Twice and Im Chang-jung. He soon turned his eye to songs from singers who have strong fan bases, or fandoms.

“Recently, I realized the power of fandom,” he said. “I gained profits of 40 percent once I resold the shares from a singer with a powerful fandom.”

He receives monthly royalties ranging from 300,000 won to 1.2 million won depending on how many times the songs in which he has a share are played at noraebang (singing rooms) or on TV shows.

The average rate of return for Musicow users is about 9.1 percent.

Users of the platform are of two basic types: fans and investors. Fans are enthusiastic about owning for decades a stake in songs by their favorite singers. Investors see it as a way to make money.

“Fans participate in the competition by enthusiastically raising the price to the highest level while investors try to lower the cost,” Jung Hyun-kyung, co-CEO of Musicow, said. “The two disparate groups coexist side by side.”

High expectations can lead to disappointment.

Some popular songs, such as IU’s “Merry Christmas In Advance” and Ailee’s “Evening Sky,” recently traded at about 130,000 won per share, but the total royalties for each song were under 3,000 won a year.

For unpopular songs, reselling can be tough as demand is low, so users must be very careful when purchasing the shares. A shortage of registered songs is another problem that needs to be tackled.

While Musicow’s registered users reached 110,000, it only has around 550 songs. Due to the small number of songs, the hammer price of a popular song goes through the roof.

“Securing more songs is one of the biggest goals of our company,” Jung said. “We are trying our best to increase the supply with the aim of introducing at least one new song a day.”

BTS, Blackpink and some other mega-acts have not made their copyrights available for purchase.

Jung is a lyric writer of seven songs for popular singers such as Bobby Kim and indie band Busker Busker.

“Receiving loyalties as a lyricist, I thought that I could make it as a safe asset for many people,” Jung said. “I [and the co-founder] developed the transaction system and obtained a patent.”

According to Jung, Musicow established Musicow Asset, a subsidiary, in order to allow users to receive royalties directly from the Korea Music Copyright Association. These copyrights will be protected even if the company were to go bankrupt.

Musicow in May received 10 billion won of investment from Korea Growth Investment Corporation. The company plans to introduce a mobile app by the end of the month.