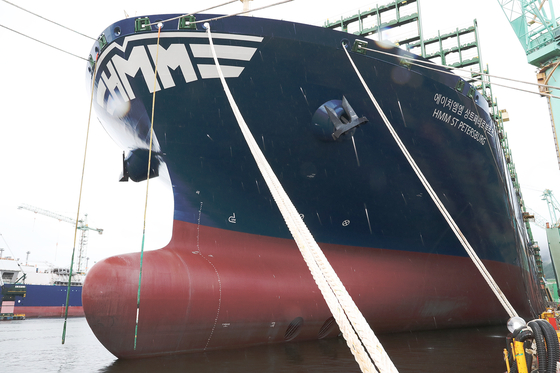 The front of the HMM St Petersburg. [HMM]


Around 90 percent of the HMM St Petersburg has been completed at the Samsung Heavy Industries' shipyard. The massive ship still has some interior work, including the installation of automation systems and facilities, to be done before it is delivered to HMM next month.

The 24,000 twenty-foot equivalent unit (TEU) behemoth dwarfed the other vessels in the Samsung Heavy shipyard, making them look more like small fishing boats than ocean-fairing container ships in their own right.

The container vessel is one of HMM’s 12 mega-sized carriers. Samsung Heavy Industries obtained the order to build five of the vessels, and Daewoo Shipbuilding & Marine Engineering (DSME) the remaining seven. 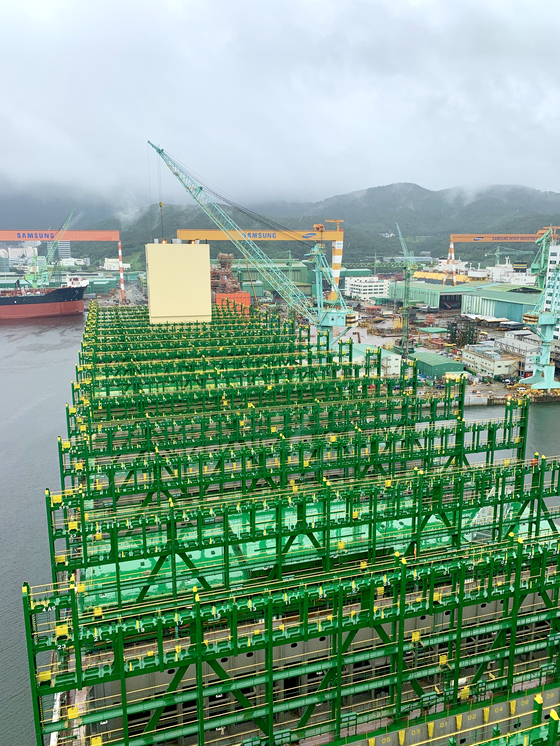 The HMM St Petersburg deck seen from the wheelhouse. [HMM]

The carriers sail the Asia-North Europe route through a partnership with THE Alliance, a global shipping alliance.

“Most of the utilities are expected to be complete by Aug. 19,” said project manager Lee Jae-kon from Samsung Heavy at the container ship tour on Tuesday. “The trial operation of the ship will begin on Aug. 23. Once problems found during the trial run are resolved, the ship will be delivered to HMM on Sept. 11.”

The ship has elevators, but they weren't working during the visit. The heat coming off the engine and having to go up and down the steep narrow stairs in a raincoat and helmet left almost everyone covered in sweat, although apparently it was a “cool day” inside the ship, according to an HMM spokesperson.

The components used to build the ship come from domestic companies.

“One of the biggest challenges for shipbuilders using overseas components since the Covid-19 outbreak is the difficulty of bringing foreign engineers to test the ship due to the quarantine period,” Lee said. “Most of the parts we use are from domestic companies. This gives them a reference to later obtain orders from foreign companies.”

The new ship is also equipped with a scrubber, which is intended to reduce sulfur oxide emissions to reduce the damage shipping imposes on the environment. The International Maritime Organization's IMO 2020 regulation mandates a maximum sulfur content of 0.5 percent in marine fuels globally, down from the previous 3.5 percent. 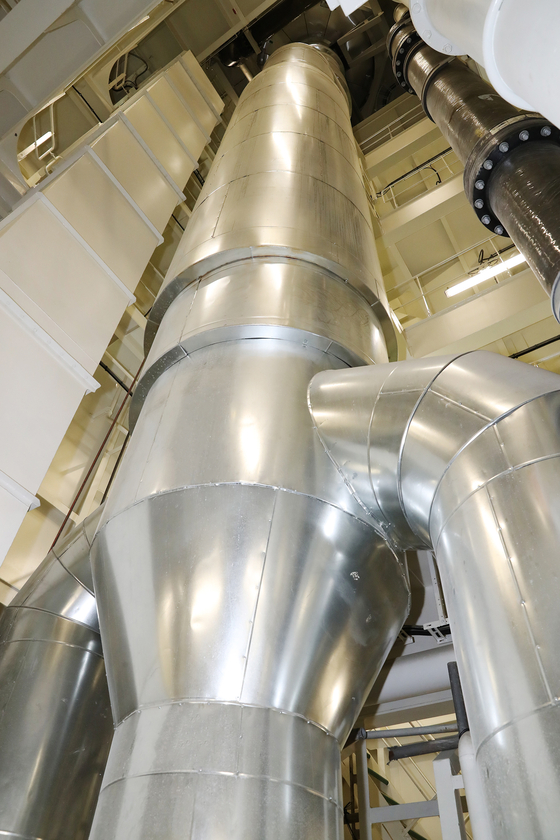 
Installing a scrubber costs around 8 billion won ($6.75 million) for a ship as big as the HMM St Petersburg.

Building such big container ships was necessary because the importance of efficiency has outgrown transportation speed.

“The shipping industry trend has shifted following the global financial crisis [in 2008],” said Kim Seong-min, a spokesperson for HMM. “Before the Lehman Brothers crisis, the focus was transportation speed. But after going through chicken game among global shipping companies that resulted in the reorganization of the industry, the focus started to shift to the efficiency of transporting more containers at once, even if that requires more time.”

HMM announced in a preliminary report Wednesday that it swung to 28.14 billion won in net profit in the second quarter. It also reported 138.72 billion won in operating profit, swinging from an operating loss in the same quarter in the previous year. Its sales were down 1.6 percent on year to 1.38 trillion won.

Its performance in the first half of the year was affected by Covid-19, which resulted in fewer containers being transported. But becoming a regular member of THE Alliance starting in April helped the company secure freight.