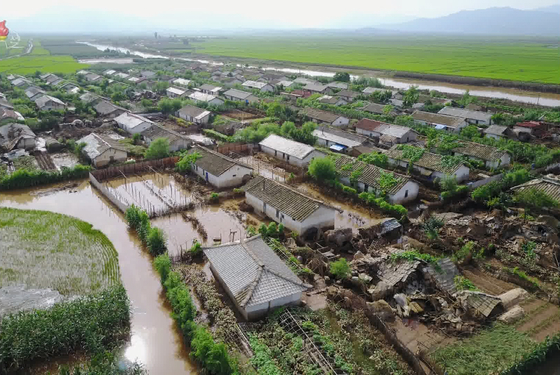 
The United Nations and South Korea say they are ready to help North Korea recover from heavy flooding this month, but Pyongyang remains publicly tight-lipped about reaching out for assistance, instead stressing self-reliance through its state media.

Noting North Korea had been pummeled by floods as a result of heavy rains this month, UN Secretary General spokesman Stéphane Dujarric said in a press briefing Tuesday that the “UN team is in contact with authorities and stands ready to support its response to the most vulnerable communities if required and requested."

The regime this month issued alerts nationwide as it was drenched by heavy rains. State media reported some areas of the country received upwards of 700 millimeters (28 inches) of rain, with Pyonggang County in Kangwon Province alone receiving a record 854 millimeters.

There is little detailed information about the damage caused by the resultant flooding and landslides, but given the havoc the rains caused in South Korea — killing more than 30 people — the regime’s losses may be massive.

South Korea’s Ministry of Unification said it had no statistics on hand about the damages, but noted a variety of state media reports from the North about the damage, particularly those incurred by farmlands in the country.

Amid such concerns, South Korea approved a plan to provide $10 million in humanitarian aid to North Korea via the UN World Food Programme, largely to support the organization’s monthly program supplying nutritious foods to children and nursing mothers in the famine-prone country.

The UN Security Council Sanctions Committee on North Korea last week also approved an initiative by the Gyeonggi provincial government in South Korea to send $368,000 worth of building material to the North.

The aid materials included irrigation tools like pumps or devices for temperature control to aid the country in building greenhouses for vegetable production.

Medical equipment to combat the Covid-19 epidemic, such as protective gear, was also approved to be sent to the North.

Countries like Canada and Sweden have reached out with offers to send aid to Pyongyang, whose economy has been hammered by both the pandemic and continued international sanctions over its nuclear program.

While undisclosed dialogue may be continuing between the regime and the international community, as hinted by the UN, state media in the North have focused on propping up the regime’s independent efforts to combat its multiple troubles.

Propaganda pieces about Kim’s visit to flood-damaged areas last week and the dispatch of troops to aid the recovery efforts have been trumpeted by official media, but no reports have surfaced on international assistance offers.

“North Korea is stressing ‘self-reliance,’ so it may not want to show its people that it is reaching out for help from abroad even if that may be what they are doing beneath the surface,” said a former high-ranking South Korean official familiar with inter-Korean affairs. “It may also be concerned with receiving international aid packages as it has completely shut down its borders due to fears of Covid-19.”