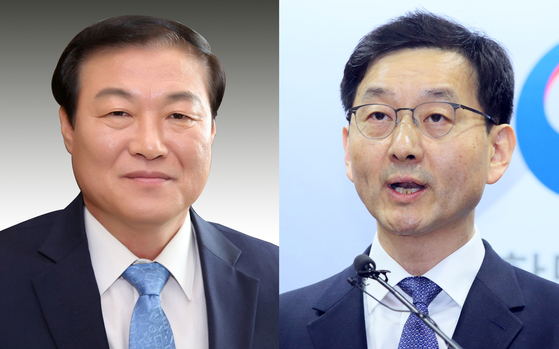 Moon also named Yoon Chang-yul, a senior official in the Office for Government Policy Coordination, as senior secretary for social affairs in the second installment of a Blue House reshuffle.

According to presidential spokesman Kang Min-seok, Moon recruited Chung for his insights into political and economic issues and for his communication skills.

"We believe he will be able to offer accurate and clear explanations about key issues to the people to promote efficiency and public support for our policies," Kang said.

Chung is a former reporter for the Korea Economic Daily. He started his political career in 2002 by joining the Millennium Democratic Party, a predecessor of the ruling Democratic Party (DP).

In the Roh Moo-hyun Blue House, he served as policy secretary and protocol secretary.

In April general elections, Chung ran as a DP candidate for Chuncheon-Cheolwon-Hwacheon-Yanggu B District in Gangwon, but lost.

According to Kang, Moon chose Yoon as senior secretary for social affairs for his balanced views and ability to coordinate policies. Yoon will be in charge of establishing social policies to improve Korea's inclusiveness.

Yoon passed the civil service exam in 1990. He spent most of his career in the Prime Minister's Office.

Since then, public discontent over Moon's failed policy to cool real estate prices has grown and his approval ratings have plummeted.

In response, Moon replaced top officials, mainly those who own lucrative real estate beyond their primary residences. Those properties are seen as a sign of hypocrisy by the public — or even proof that the Blue House secretly wants real estate prices to continue climbing.

Four secretaries on the presidential team were replaced on July 24, three of whom owned multiple properties.

Despite the Blue House’s instruction to its top aides to sell second homes, eight senior secretaries owned more than one residence as of July 31, the deadline set by Chief of Staff Noh Young-min.

On Monday, Moon replaced three of the six. The fourth — the senior presidential secretary for public affairs — was replaced in the latest reshuffle.

It is now clear that owning a single home or being a renter is a new prerequisite to work in the Moon government.

“If you look at the recent series of appointments, you can see that the culture in officialdom is changing,” said a senior Blue House source.

Among the three new senior presidential secretaries named Monday, Senior Presidential Secretary for Political Affairs Choi Jae-sung owns no property. The other two each own a residence.

Kim Dae-ji, named on July 30 as the new head of the National Tax Service, also owns no home.

Yoon Jong-in, sworn in as the chairman of the Personal Information Protection Commission on July 5, owned an apartment in southern Seoul's Seocho District and a contract for a new apartment being built in Sejong. He already sold the Seoul apartment, the Blue House said.

Speculation is growing that the two will not be replaced soon because their roles in the Blue House are linked to personnel management. Noh is the head of the candidate recommendation committee at the Blue House, and Kim is in charge of recruitment and vetting of top officials.