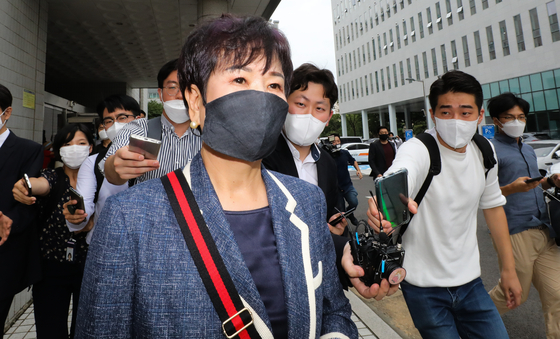 
A former lawmaker was convicted Wednesday of using insider information to purchase real estate in the southern Jeolla city of Mokpo under other people's names, and was sentenced to an 18-month prison term.

The Seoul Southern District Court on Wednesday found Sohn Hye-won guilty of making real estate investments under other people’s names, using classified information she had obtained while working as a lawmaker that indicated the properties would increase in value.

“By doing so, she destroyed the people’s faith in a public servant,” the court said.

The court also convicted Sohn’s former aide for using the same classified information to purchase a property in Mokpo under her daughter’s name. The former aide was sentenced to one year in prison.

“This is serious corruption that must be eradicated from our society,” the court wrote in its ruling. “The accused showed no sign of remorse and flatly denied their charges during the trial, so it was unavoidable to hand down prison terms.”

Neither Sohn nor the aide were immediately taken into custody.

Sohn was indicted in June 2019 for using classified information regarding the Mokpo city government's urban restoration and development program.

According to the prosecution, Sohn, who was a lawmaker from the ruling Democratic Party (DP) at the time, obtained the city development plan in May 2017. Through January 2019, Sohn’s niece, Sohn's friend and a cultural foundation operated by her husband purchased 1.4 billion won ($1.2 million) worth of property, including 21 buildings, the prosecution said.

Prosecutors argued that Sohn bought the real estate and planned to sell it once prices rose following urban development in the area.

It's illegal for public servants to use confidential government information to make money in real estate, as is buying real estate under someone else's name.

The court said Wednesday that Sohn had violated the law by purchasing properties under other people’s names. Her purchases of properties after the Land Ministry announced the Mokpo development plan in December 2017 are not against the anti-corruption law, the court said, because the information is no longer confidential.

In a Wednesday Facebook post, Sohn said she disagrees with the conviction, and will consult with her lawyer to take necessary steps for an appeal.

Elected as a lawmaker with the DP in 2016, Sohn left the party in January 2019 and completed her term as an independent representative. She is a friend and former high school classmate of First Lady Kim Jung-sook.

Sohn segued into politics from her previous job, as a brand designer for President Moon Jae-in. Prior to her political career, Sohn created designs for a host of well-known names, including both of the country’s top two soju labels.

After spending nearly a decade languishing with low support numbers, the DP under Moon’s leadership tapped Sohn ahead of the 2016 legislative elections to lead a massive rebranding campaign and overhaul the party’s image.