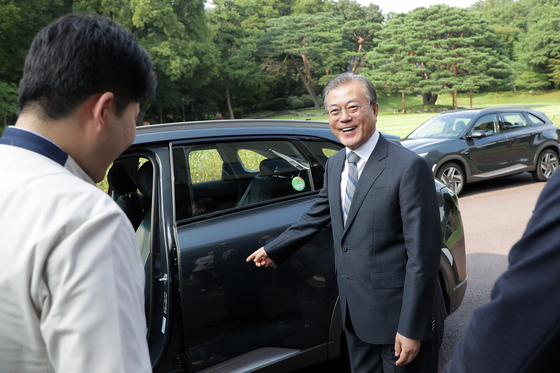 I have a series of questions here. When only Tesla is having fun among electric car makers, what about hydrogen vehicles? The origin of my curiosity is President Moon Jae-in’s declaration in April 2019 that system semiconductors, bio-health and future automobiles would be selected as three core innovative industries for the future. President Moon has been frequently visiting such industrial sites.

But I find the future vehicle industry questionable. Just like electric cars, I am afraid Korean hydrogen cars won’t get much attention. Hydrogen vehicles are the future of automobiles. Electric cars seem to be the mainstream because of Tesla. But hydrogen technology is appropriate not only for sedans but also for trucks and buses that require more power. Once electric cars are settled, hydrogen cars will likely continue to boom. So I have doubts and concerns as only foreign companies would benefit in the hydrogen car industry, as in the electric car industry.

The signs are becoming reality already. The Ministry of Trade, Industry and Energy designated Hyundai Rotem as the hydrogen recharge infrastructure business in May. The problem is that this company chose Japanese company Osaka Gas’ technology instead of Korean technology. In the bidding, indigenous technology that the Korea Institute of Energy Research invested 20 billion won to develop was not chosen.

Hydrogen cars, which are directly related to the future vehicles that the government named as the three next-generation innovative industries, are faltering from the beginning. In January 2018, the government announced a road map to vitalize the hydrogen economy. The plan outlines producing 6.2 million hydrogen cars, while building 1200 charging stations to create 420,000 jobs by 2040.

We are currently engaged in a war of materials, parts and equipment with Japan. It is a comedy that Korean technology is neglected and Japanese technology selected to nurture the fabled hydrogen economy.

Last month, Hyundai Motors mass-produced hydrogen trucks for the first time in the world and exported them to Switzerland from the Gwangyang Port in South Jeolla, but the core parts were made by foreign companies instead of Korean technology. The government must thoroughly review where this problem originated.

Musk exercises all his stock options