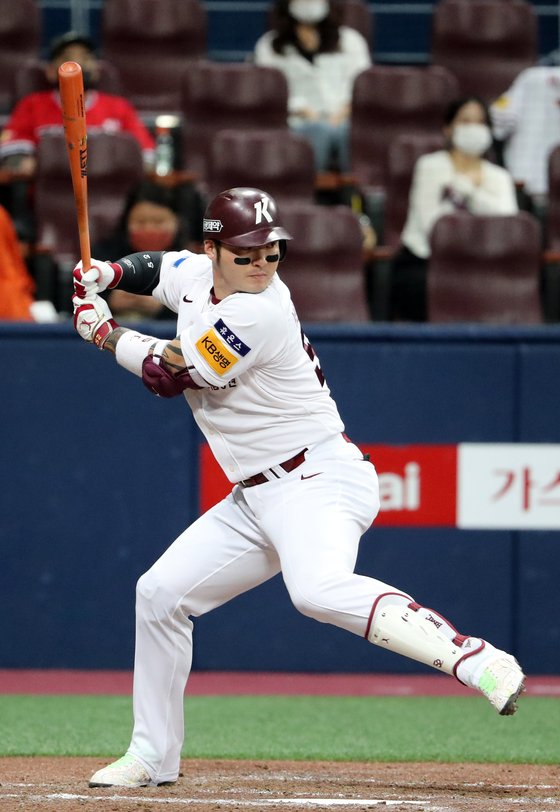 Park Byung-ho of the Kiwoom Heroes hits his 20th home run of the season during a game against the Hanwha Eagles on Tuesday. [YONHAP]


Park Byung-ho of the Kiwoom Heroes became only the second player in KBO history to knock 20 home runs out of the park in seven straight seasons on Tuesday.


Hitting his 20th homer of the season during a game against the Hanwha Eagles at Gocheok Sky Dome on Tuesday, Park joined Samsung Lions legend Lee Seung-yuop as one of the only two players to manage the seven-season feat, and he did it with almost half the season still to play.

Both teams struggled to add on in the later going, pushing the game into extra innings. After four hours, 58 minutes and 12 innings, the Eagles finally broke the silence to win the game 7-5.

Although the team lost, Park’s record stands out. Except for the 2016-17 season, when he was playing in the United States, Park's been hitting 20 home runs or more every season for the Heroes. Park’s 2014 and 2015 seasons definitely stand out as he won the home run title with 52 and 53 home runs, respectively. Although the number has decreased since then, Park has still managed to hit more than 30 homers per season.

As Park’s 20th home run of the season was recorded during the Heroes’ 82nd game of the 2020 season, he has the potential for another strong year with 30 or more home runs. Park's worst year of the last seven in the KBO in terms of home runs was 2012, when he hit 31.


Park has now tied the record with Lee, but if he manages to hit 20 home runs or more next year, he will become the first-ever player to do so in the KBO history. Lee retired in 2017.