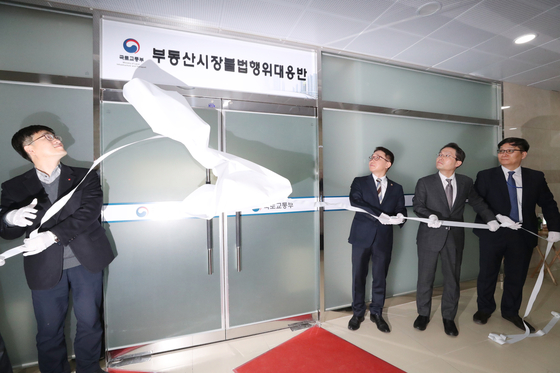 Park Sun-ho, the vice minister of the Land Ministry, and other attendees cut the ribbon at the launch ceremony of the real estate market task force at the Sejong Bank Building in Sejong City on Feb. 21. [YONHAP]


Online chat rooms in which real estate is the subject of discussion are being monitored by the government, and people could end up in jail for comments made online.

It is not clear what sort of statements could trigger an investigation, raising concerns that opinions about market direction and the value of properties could be criminalized in the name of fighting speculation.

In a Wednesday meeting, Deputy Prime Minister for the Economy Hong Nam-ki said the government is currently inspecting online platforms to root out interference in the housing market. Those suspected of doing so will be arrested for criminal violations, Hong said.

While efforts to manipulate prices through activities that violate existing laws related to investment activities and fraud are possible targets of the investigation, Hong more vaguely mentioned focusing on people creating "disturbances" in the market and those who "throw the market into confusion."

Social media platforms and online communities are subjects of the inspection. Any illegal activities that affect market prices could lead to prison sentences of up to three years and fines of up to 30 million won ($25,000).

The government will support related crackdowns by the National Tax Service (NTS) regarding the Seoul metropolitan area and Sejong City.

“We have already identified a few suspicious cases regarding high-priced apartments,” the finance minister said.

“If needed, we will look into establishing a supervisory organization for the real estate market,” said Moon during a meeting at the Blue House with top presidential aides. No decision has been made on the structure and size of the organization, nor under which ministry it will operate.

This isn't the first time the government had tried to set up a monitoring body on real estate.

In February, the Ministry of Land, Infrastructure and Transport created a task force to catch illegal activities in the real estate market. The team had 14 members selected from the Land Ministry, the prosecution, police, the NTS, the Financial Services Commission and the Financial Supervisory Service. The group had access to data at the Korea Appraisal Board (KAB) unavailable to the public.

Half of the 110 cases the task force had internally investigated in a five-month period closed due to lack of evidence, said Rep. Kim Sang-hoon of the main opposition United Future Party. The analysis was based on documents from the Land Ministry. Among the 55 that weren't closed, 18 charges resulted in formal investigations and six led to indictments.

“Announcing the launch of a real estate watchdog after an unproductive task force only fuels the public’s anxiety and horror,” said Kim.

The lack of details on the regulator's function created controversy, as subjects of the supervision remain unknown. Some experts raise concerns that individuals will become unintentional offenders amid the flood of real estate regulations.

“The administration’s main problem is that it skips the stage of careful deliberation before implementing policies,” said Kim Jun-hyung, a real estate professor at Myongji University. “The government gets ahead of itself before discussing whether or not it is necessary to create a new establishment using tax money and specifying who it is exactly monitoring.”

“Speculators do not move the market. The end users do,” said Hur Yun-kyoung, a researcher at Construction & Economy Research Institute of Korea. “If abnormal transactions are the problem, it is better to make an environment where regulation can happen autonomously like publicizing market statistics which are currently monopolized by the KAB.”