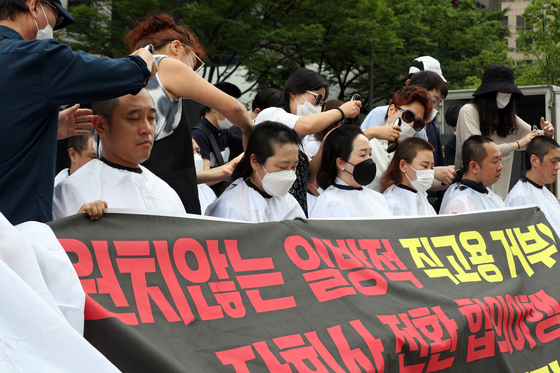 Subcontracted workers from Incheon International Airport shave their heads at an event held in central Seoul on Thursday to show their disapproval of the airport’s announcement that they must pass a test or go through the public recruiting system to be upgraded. [NEWS1]


Incheon International Airport’s attempt to offer salaried jobs to its subcontracted workers continues to flounder, as some lost their jobs entirely after failing tests to be upgraded.


The airport's labor union, which is part of the Federation of Korean Trade Unions, held a press event in central Seoul Thursday to criticize the airport.

The event was attended by 100 subcontracted employees of the state-run airport corporation, including security guards. Some of them shaved their heads in protest of the botched effort to give them stable jobs with benefits.

They demanded the airport corporation immediately halt its one-sided push to directly hire irregular workers, which they said was leading to lost jobs.

“Security guards believed in the employment promise by President Moon Jae-in when he visited the airport [in May 2017],” said Gong Min-cheon, head of the union representing the subcontracted security guards. “But the corporation forced a direct hiring procedure that wasn’t demanded by the laborers, and unilaterally decided we'd be fired if we don’t pass the test.”

Jobs at Incheon Airport are considered choice positions, and many applicants were disappointed that positions were being offered to the subcontracted workers.

Lee Jong-hyuk, a subcontracted employee who keeps animals away from runways, said, “I’ve been working at the airport for decades, but was suddenly told to go through a test, and was notified that I lost my job.”

Some 47 subcontracted workers have lost their jobs.