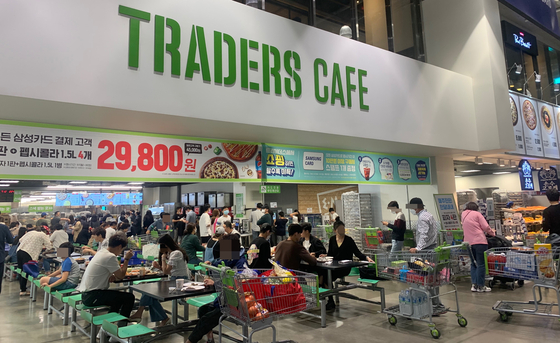 Emart Traders branch in Hanam, Gyeonggi, in May. [EMART]


Emart reported more than 300 billion won ($253 million) in net profit in the second quarter after selling off assets including land in Magok-dong, western Seoul.

In a regulatory filing on Thursday, Emart reported 314.5 billion won in net profit compared to 26.6 billion won in net loss in the same quarter last year. But its operating loss dipped 58.6 percent on year to 47.4 billion won during the same period due to the continued impact of Covid-19, according to Emart.

Its April-June period sales went up 13.2 percent on year to 5.19 trillion won.

Emart said sales of SSG.com grew 42 percent to 931.7 billion won, while its operating loss expanded 21 percent during the same period to 13.7 billion won.

Its big box store chain Traders saw on-year sales rise 18.6 percent to 661.4 billion won, while its operating profit grew 5.5 percent on year to 800 million won. Emart said it hopes to see Traders growth continue in the second half of the year with the opening of a new branch in Anseong, Gyeonggi. 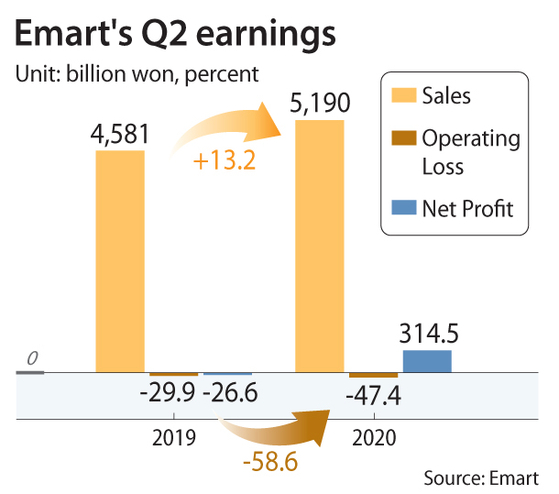 Emart plans to open seven more stores, including the one in Anseong, by 2023.

Emart plans to “offer differentiated groceries and expand consumer-centered stores in the second half of the year,” the company said in a statement.

On Wednesday, the department store chain Shinsegae, also under Shinsegae Group, reported 106.27 billion won in net losses compared to a 24.3 billion won net profit in the same period a year earlier — the first time Shinsegae reported a quarterly loss since Emart was spun off in 2011.