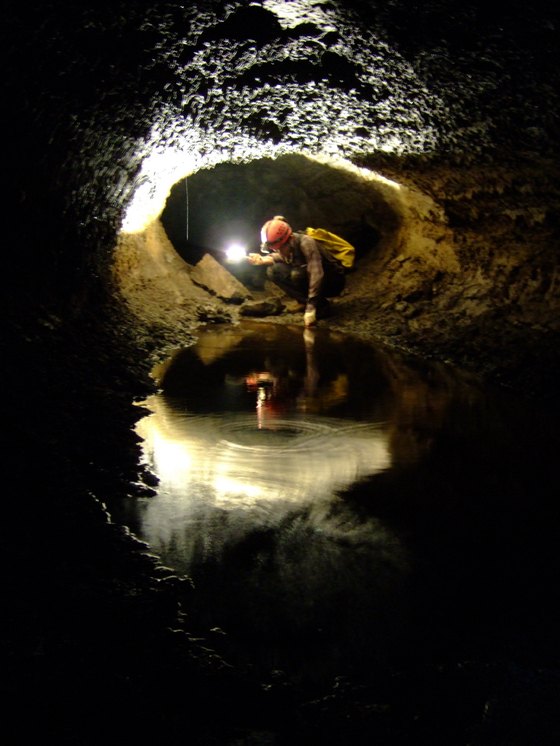 Bengdwigul is 4,481 meters long with complex passages, which is very rare throughout the world. [JEJU WORLD NATURAL HERITAGE CENTER]


JEJU ISLAND – There are many charming aspects of Korea’s Jeju Island that make the volcanic island one of the top destinations for travelers both in and outside the country. Some say they just adore the beautiful beaches, while others list their top oreums (large and small volcanic edifices) that dot the island. Whatever the reason, it is definitely the masterpieces of Mother Nature that seem to attract a great number of tourists to the southern island.

There are 14 Unesco designated heritages in Korea, of which 13 are cultural and the remaining one is natural. And that one Unesco designated natural heritage in Korea is the “Jeju Volcanic Island and Lava Tubes,” which was inscribed in July, 2007.

Some may think that the whole island got the honorable inscription, but it actually only includes the “Halla Mountain Natural Reserve, Seongsan Ilchulbong Tuff Cone and the Geomunoreum Lava Tube System,” which includes one oreum and several caves such as Geomunoreum, Bengdwigul, Manjanggul, Gimnyeonggul, Yongcheondonggul and Dangcheomuldonggul.

“Even many Jeju natives think the whole island has been inscribed,” said Kim Tae-wook, who will spearhead the Jeju edition of the 2020 World Heritage Festival that kicks off on Sept. 4. Kim is also a native of the island. “But we wanted to take this opportunity to really educate and let people know what parts of Jeju Island are Unesco designated heritages; why they got inscribed as well as how we should preserve them and value them.”

Organized by the Cultural Heritage Administration, the 2020 World Heritage Festival is a series of festivals that make stops at different regions of the country that holds Unesco designated heritages, in efforts to introduce Korea’s valuable cultural and natural heritages while boosting tourism that has stagnated in the midst of the Covid-19 pandemic. 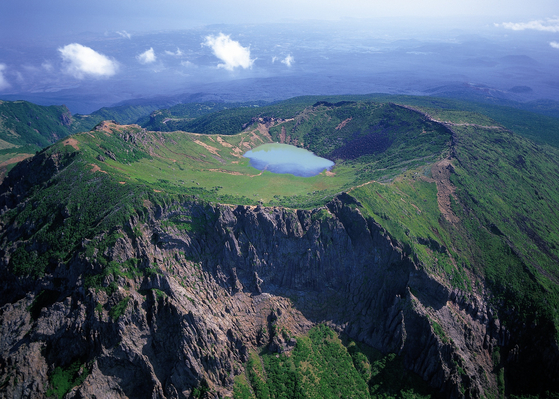 
The first round of the festival kicked off on July 3 to introduce Korea’s neo-Confucian academies known as seowon that joined Unesco’s list of world heritage sites last year. The festival then moved to North Gyeongsang to hold a month-long event to introduce various cultural heritages of Korea in cities like Andong, Gyeongju and Yeongju.

The third stop is Jeju Island. But unlike the other festivals that ran for longer periods, the Jeju festival will only last for 17 days.

“We didn’t want to make the festival longer because the main objective of this event is not boosting tourism, but really to promote the lesser known areas of the inscribed natural heritage like the Geomunoreum lava tube system,” said Kim. “Many people have been to Mount Halla or the Seongsan Ilchulbong. But they don’t know much about Jeju’s lava tube system even though it’s a volcanic island.”

That is why for 17 days, the Jeju World Natural Heritage Center, which has been organizing the Jeju edition of the festival, got the permission from the Cultural Heritage Administration to open up some of the caves that are part of the Geomunoreum lava tube system, which have been strictly prohibited from the public eye for preservation. So far, 10 caves have been discovered in the Geomunoreum lava tube system, and of those, only a part of Manjanggul has been open to the public. 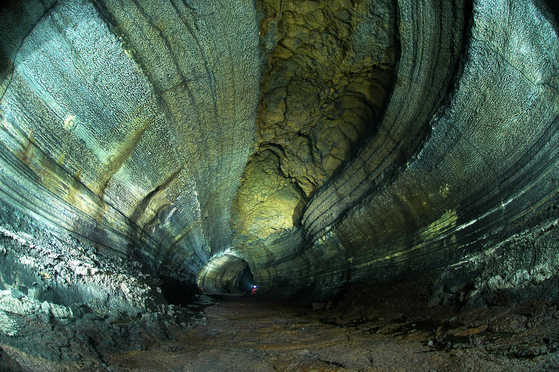 Manjanggul is the longest lava tube measuring 7.4 kilometers, and has the largest lava columns in the world. Only one kilometer of the cave has been opened to the public. [JEJU WORLD NATURAL HERITAGE CENTER]


“We want to say that Mother Nature allowed us to enjoy this beautiful nature, which Unesco also regarded as the ‘finest such cave system in the world,’ for 17 days and then we should preserve it,” said Kim.

For the 2020 World Heritage Festival Jeju titled, “The Breath,” the organizers planned various programs which include a walking trail that allows visitors to follow the trail the volcano had left while flowing toward Woljeongri Beach, leaving several caves on its way some thousands of years ago. The date of the eruption is disputed, with some saying that it took place as far back as 200,000 years ago, while some research dates it back to just 8,000 years ago.

“It is a very rare case that a lot of long-distance lava tubes were created along a small oreum like Geomunoreum,” said Ki Jin-seok, a researcher of Jeju World Natural Heritage Center.

Of course there are other programs of the festival as well, such as hiking Mount Halla and Geomunoreum. The organizers have also prepared various seminars and conferences to talk about how to better promote and preserve natural world heritages. There are also art exhibitions and camping programs at Seongsan Ilchulbong, which are also usually prohibited.

But if you can only pick one, the organizers say try the walking trail along the Geomunoreum lava tube system, which they named the “Breath of Fire Trail.” 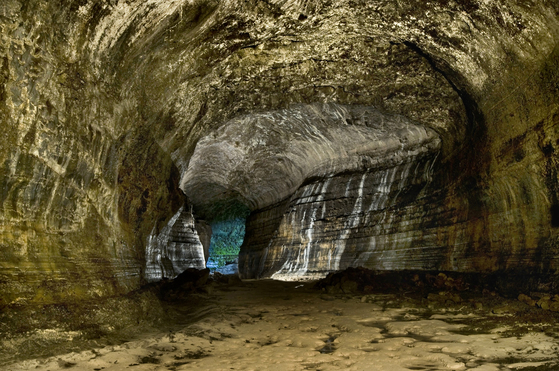 Gimnyeonggul is about 705 meters long and is highly valued due to its well-preserved internal morphologies, which help to better understand the formation processes. [JEJU WORLD NATURAL HERITAGE CENTER]


The course, which stretches about 21 kilometers (13 miles) begins from the Jeju World Natural Heritage Center located next to Geomunoreum, and ends at Woljeongri Beach. It is possible to finish the trail within a day, but Kim Sang-su, an official from the center says that to really observe the different traces of the lava flow and to make stops at the caves, it’s better to take your time.”

That is why the center decided to operate shuttle buses along the trail that take people back to the center by dividing the route into three sections.
Some of the caves along the trail that are open to the public for the first time include Bengdwigul, which is known to have the most complex passage structure among other lava tubes on Jeju Island; as well as Gimnyeonggul and Manjanggul.

During the press tour of some of the restricted caves late last month, Kim from the center showed the reporters how the officials and the festival organizers “personally developed the ‘Breath of Fire Trail’ by walking through bushes and crawling under broken tree trunks.” 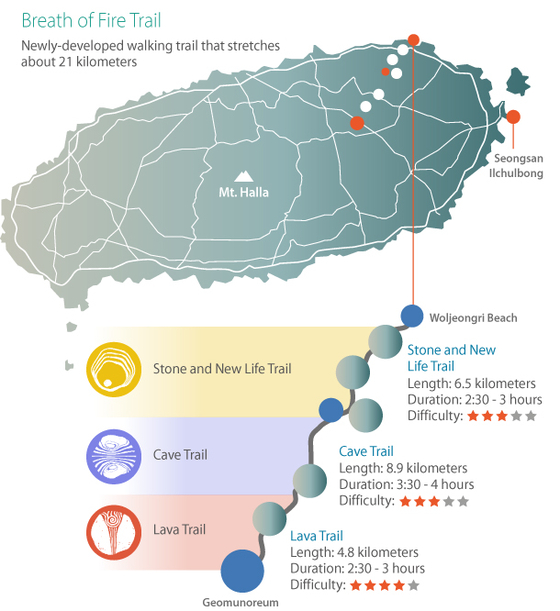 
“Because these caves were prohibited and only accessible to researchers, there were no trails leading up to the entrances of the caves,” he added. “We had to step on them, drive over them and literally create a trail for the festival.”

Manjanggul is 7.4 kilometers long and only 1 kilometer of it has been open to the public. When the reporters were guided into the prohibited area of the Manjanggul, Kim told them to turn off all the headlights on their safety helmet and put their cameras down for a second.

“Usually, your eyes get used to the dark after a while, but in here, they won’t — because there’s not a single hint of light. It’s literally pitch black.”
Kim said people will be amazed by the different marks the lava flow made in each cave. 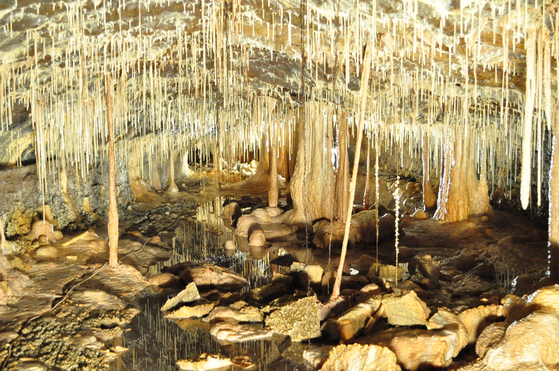 Dangcheomuldonggul was accidentally discovered in 1994 when a local farmer was clearing land for farming. It is only 360 meters (1,180 feet) long. [JEJU WORLD NATURAL HERITAGE CENTER]

These two caves are known for their unique type of secondary mineral deposits. However, a virtual reality tour of Yongcheongdonggul is available on YouTube via the K-Heritage TV channel, which is run by the Korea Cultural Heritage Foundation.

Admission is free during the festival; however, reservation is a must to regulate the number of people and keep records of their information due to the coronavirus situation. Reservations began on Aug. 4 via the center’s website (www.worldheritage.kr).

The center is also recruiting a special “expedition group” that will be allowed to explore deeper into the caves as well as camp overnight at Seongsan Ilchulbong.

“It would be a once-in-a-lifetime experience, but the competition will be fierce,” said Kim Tae-wook, the general director of the festival.

The director says the opening ceremony that will take place at the Seongsan Ilchulbong will also be fascinating. 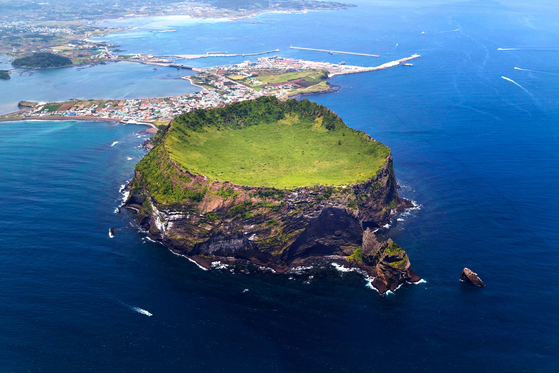 
“One side of the Seongsan Ilchulbong will be used as a canvas,” he said, “and images will be projected on it."

The opening ceremony will be held on Sept. 5, and other projection media shows will be screened on Sept. 6 and 7 at 7 p.m.

“So far, these areas were not open to the public for the sake of preservation,” said Kim. “But we want to take this opportunity to carefully let people enjoy them and value them, even if it’s only for a short period of time.”