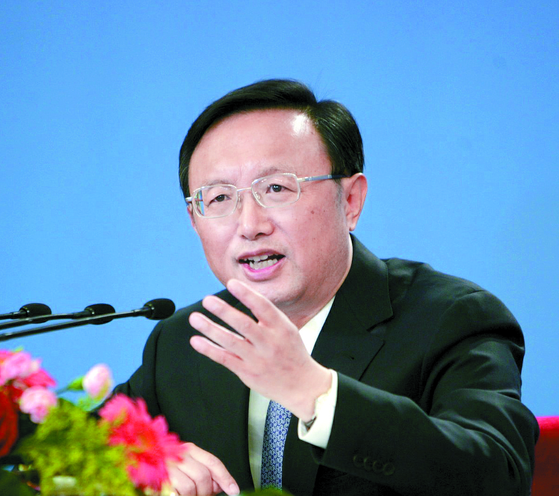 Yang Jiechi, a member of the Political Bureau of the Chinese Communist Party’s Central Committee and director of the Office of the Foreign Affairs Commission. [JOONGANG PHOTO]


Yang Jiechi, a Politburo member of the Chinese Communist Party, is planning to visit Seoul as early as next week, possibly to discuss a future visit by Chinese President Xi Jinping later in the year, diplomatic and ruling party officials said Thursday.

The Hankook Ilbo first reported Thursday that Seoul and Beijing officials are in the final stages of arranging a visit by Yang, citing a key ruling party member.

Such a visit by Yang, China’s top diplomat, could help arrange a visit by Xi to Seoul later this year. It may also include discussions of the situation on the Korean Peninsula, including bringing Pyongyang back to the dialogue table amid stalled denuclearization negotiations.

Korean Ministry of Foreign Affairs spokesman Kim In-chul declined to confirm or deny a trip by the senior Chinese official during a briefing Thursday.

Chinese Foreign Ministry spokesman Zhao Lijian said during a press briefing Thursday that an “announcement will be made at the appropriate time” and stressed that China and South Korea “are important neighbors and partners.”

If Yang makes a visit, he could meet with key Korean foreign affairs and security officials to discuss areas of mutual interest. Yang last visited Seoul over two years ago, in July 2018.

However, Korea has often found itself in a difficult position amid growing Sino-U.S. tensions over trade and security matters.

In a lengthy commentary published Friday on U.S.-China relations — which he said is in the “most complex and grave situation since the establishment of diplomatic ties” — Yang called on Washington to respect Beijing’s “core interest” and “avoid strategic miscalculation.”

Bilateral tensions escalated over the deployment of the U.S.-led Terminal High Altitude Area Defense (Thaad) antimissile system to Korea in 2017. Beijing strongly protested the Thaad deployment, which it saw as a threat to its strategic interests, and imposed unofficial economic retaliatory measures on Korea, but the two countries have since been mending relations.

Korean President Moon Jae-in visited Beijing in December 2017, but Xi has yet to reciprocate with a visit to Seoul. During their summit in Beijing, Moon asked Xi to visit Korea during the first quarter of 2020, but the Covid-19 outbreak put a damper on those plans.

Korea on Feb. 4 imposed an entry ban on Hubei and its capital Wuhan, the original epicenter of the Covid-19 outbreak. China began imposing entry bans on foreigners to block imported cases in March. The two sides agreed on expedited entries for Korean business travelers under a "fast-track" program in late April.

Last week, China resumed issuing visas to South Korean students, long-term employees and those with valid residence certificates under the condition that they have tested negative for Covid-19. Korea lifted travel restrictions on arrivals from China’s Hubei Province on Monday.