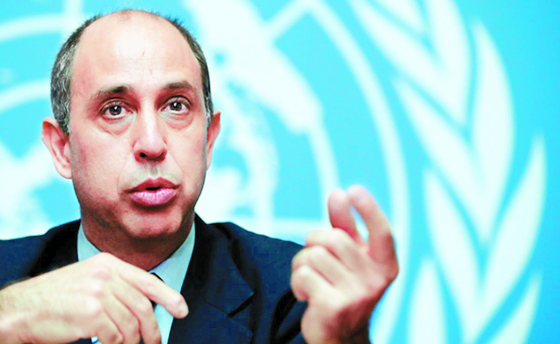 Tomás Ojea Quintana, the special rapporteur on the human rights situation in North Korea, told Radio Free Asia (RFA) in an interview that he was considering issuing a formal communication to Seoul about the potential human rights violations stemming from the probes.

On Wednesday, Seoul’s Ministry of Unification said it began inspecting 25 government-registered civic groups dealing with North Korea issues in an effort to verify whether they operate in accordance with their declared purposes.

Ministry spokesman Yoh Sang-key was cautious about concluding whether the inspections had uncovered any accounting problems or other irregularities. But he stressed that “appropriate [legal] measures” will follow if violations are found.

Quintana said such steps showed the ministry was specifically targeting these organizations based on a “political decision,” which — though he did not elaborate — suggested it was related to North Korea’s condemnation of these groups for floating propaganda leaflets critical of its leaders across the border from South Korea.

In retaliation for what it claimed was Seoul’s failure to restrain such leaflet activities, Pyongyang demolished the inter-Korean liaison office in Kaesong without prior warning in June, shortly after severing official communications with the South.

The decision prompted Quintana to call on the Unification Ministry in July to justify its crackdown on the groups, noting the measures threatened to hamper the activities of defectors resettled in the South.

While South Korean officials shared the “technicalities about their decision” in the context of domestic law, they did not directly address the political nature of the decision, Quintana said.

The envoy further commented on recent reports that Seoul may be further considering restrictions on radio broadcasts into North Korea, based on a ministry official’s vague answer Tuesday to a question raised by news outlet NK News.

“The media are fundamental in any democratic society, and the freedom of expression, even across borders, is protected by international human rights law,” Quintana said.

Organizations working on human rights in the North “have been playing an important role” for the United Nations, Quintana said, adding he wanted to “remind” South Korea of its obligation to uphold human rights.

A Unification Ministry official on Thursday said Seoul so far has not received any communications on the matter from the United Nations.

As to the inspections, the official said there had been consultations with each individual organization ahead of the proceedings.

Inspections of civic groups unrelated to defectors — like those dealing with economic and social exchanges with the North — had also been planned beforehand, the official said, suggesting there was no intention to target defector groups in particular.