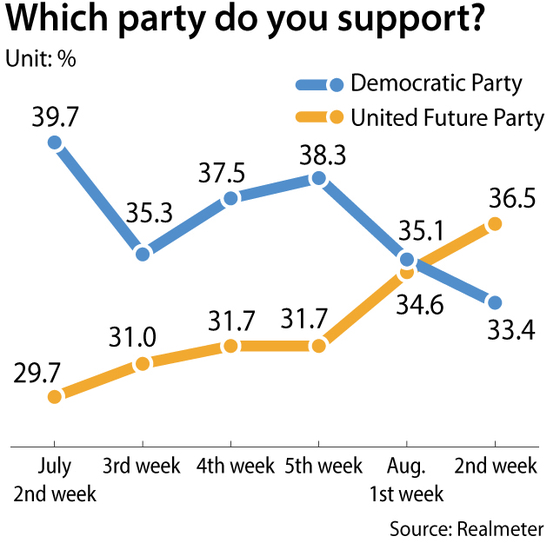 
For the first time since the 2016 political scandal that led to President Park Geun-hye’s removal from office, the approval rating of the United Future Party (UFP) overtook that of President Moon Jae-in’s Democratic Party (DP), a poll showed Thursday.

According to a Realmeter poll conducted earlier this week, 36.5 percent of respondents said they support the UFP, up by 1.9 percentage points from the previous week. That figure was the highest since the party was rebranded in February.

In the same survey conducted from Monday through Wednesday on 1,507 adults nationwide, the DP’s approval rate was 33.4 percent, down by 1.7 percentage points.

It was the first time the UFP outstripped the DP in Realmeter's weekly approval rating poll since October 2016.

Park was impeached by the National Assembly in December that year and removed from office by the Constitutional Court in March 2017. Since then, the UFP suffered crushing defeats in major elections including the 2017 snap presidential election, 2018 local elections and general elections last April.

The DP's popularity fell significantly in its traditional stronghold of Honam, or Gwangju and South and North Jeolla provinces. Its approval rating in Honam was 47.8 percent, down 11.5 percentage points from the previous week.

The poll had a confidence level of 95 percent and margin of error of plus or minus 2.5 percentage points.

Although the DP has downplayed the significance of its plummeting popularity, the latest poll alarmed many in the ruling party.

DP lawmakers largely agreed that the party is losing popularity as a result of public displeasure with the Moon administration’s inability to curb apartment prices.

Top presidential aides’ ownership of lucrative real estate beyond their primary residences was seen by the public as a sign of hypocrisy — or even proof that the Blue House secretly wants real estate prices to continue climbing.

“Public distrust on real estate policy snowballed so much that it no longer is subject to debate,” said Yoon Tae-gon, a senior analyst at Moa Agenda Strategy, a political consulting group. “This government’s policy has become a subject of ridicule.”

Over the past weeks, the UFP managed to pump up its popularity.

The UFP is also getting more leftist to attract more liberals and centrists.

On Thursday, the party, currently under the leadership of Acting Chairman Kim Chong-in, made public a draft of a new platform to reinvent its conservative identity.

“It’s all about attacking the weakness of the government and the DP,” a UFP official told the JoongAng Ilbo. 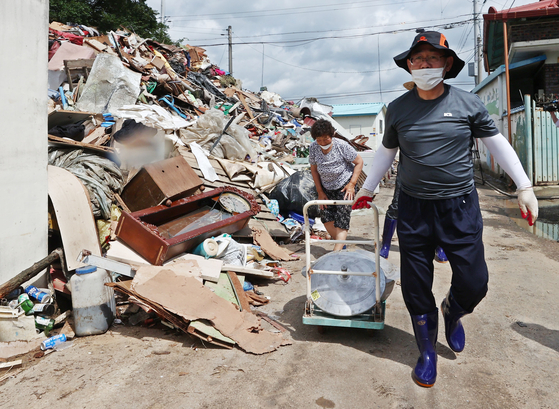 
In the platform, the UFP declared that the state should make efforts to guarantee basic incomes for a stable and free life. Introducing a basic income system has long been considered a progressive agenda.

The party also proposed to lower the age of running for office to 18 from 25.

The UFP also vowed to prohibit sex offenders from holding public office and pledged to protect sex crime victims. That pledge is an attack on the DP, whose high-profile politicians including the late Seoul Mayor Park Won-soon have been tarnished by alleged sex crimes.

It also vowed to show zero tolerance to any unfairness or abuse of power in employment and college admission.

The UFP also made efforts to appeal to Honam voters. About 300 members including Rep. Joo Ho-young, floor leader of the party, visited Namwon, North Jeolla, on Thursday to help clean up after floods.