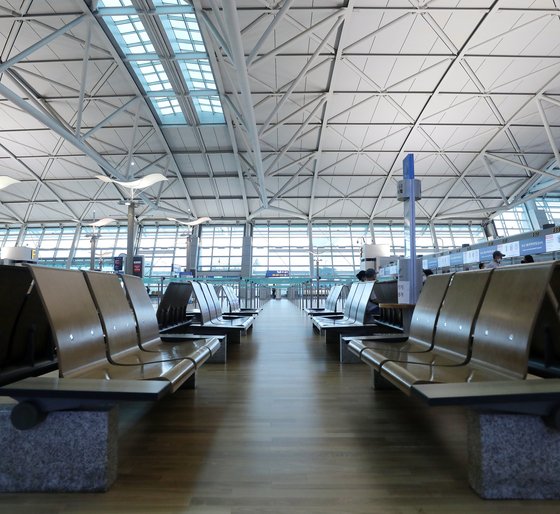 Terminal 1 of Incheon International Airport is deserted on August 9. [NEWS1]

The regulations are particularly strict for passengers from six countries — Bangladesh, Pakistan, Kazakhstan, Kyrgyzstan, the Philippines and Uzbekistan — preventing them from using Korean airlines and airports to travel from their homelands to a third nation.

On July 13, the government said passengers from Bangladesh, Pakistan, Kazakhstan and Kyrgyzstan needed to submit a negative polymerase chain reaction (PCR) coronavirus test result in order to enter Korea — even if it is just for a brief transit visit. The test has to be taken within 48 hours of their departures.

On July 20, it added the Philippines and Uzbekistan to the list.

Transit passengers who are Korean citizens or citizens of other countries do not need to show a negative PCR test result, but must have a confirmed connecting ticket and transit within 24 hours.

With passenger traffic down more than 90 percent amid the Covid-19 pandemic, the airline industry needs all the passengers it can get, including transit passengers.

National flag carrier Korean Air Lines and Asiana Airlines said on Thursday that they recently submitted an official request to the Ministry of Land, Infrastructure and Transport urging the government to ease the regulations on transit passengers.

Korean Air Lines’ flights from Philippine cities to Incheon have been hardest hit. Some 60 percent of passengers on those flights merely stop over at Incheon International Airport en route to cities in the United States.

Korean Air Lines has seen an 85 to 80 percent decline in transit passengers from the Philippines.

In the Philippines, PCR tests cost anywhere from 4,000 to 7,000 pesos ($80 to $140). Results can take seven days — making them ineligible for acceptance by Korean authorities.

As a result, travelers are avoiding Incheon and Korean carriers in favor of Japan’s All Nippon Airways, Singapore Airlines and Hong Kong-based Cathay Pacific Airways.

“The decline in the number of transit passengers for a national flag carrier might weaken Incheon International Airport’s competitiveness in the global market,” said a spokesperson for Korean Air Lines.

Korea’s suspension of visa-free entry for Chinese nationals traveling from China is another problem for the industry.

The pandemic appears to be stabilizing in China, with the country reporting new infections of less than 100 a day.

“It is now time for Korea to consider allowing visa-free entry to Chinese nationals who make up a greater proportion of the country’s transit passengers,” said another spokesperson for Asiana Airlines.