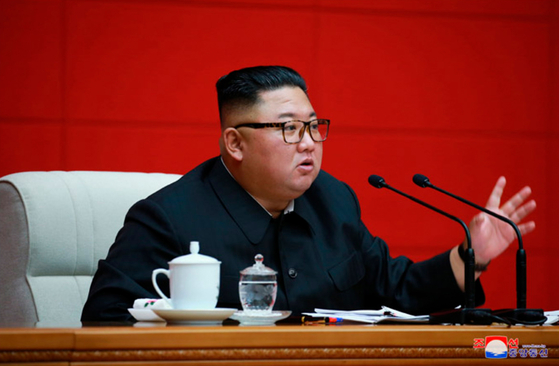 North Korean leader Kim Jong-un hosts a meeting of the politburo of the Workers' Party's Central Committee on Thursday. [YONHAP]


North Korean leader Kim Jong-un has said no to outside relief for recent floods to protect the country from the coronavirus, the state-run media said Friday.

His order to maintain the country’s isolation was issued days after the South Korean government offered help.

The North’s Korean Central News Agency (KCNA) reported Friday that Kim hosted a meeting of the politburo of the Workers' Party's Central Committee on Thursday. During the meeting, the members discussed flood damage from recent downpours.

According to the media, unprecedented heavy rains over the past weeks destroyed about 390 square kilometers (96,371 acres) of farmland. Some 16,680 homes and 630 public buildings were flooded, according to the KCNA. Roads, bridges and railways were also damaged.

"The worsening coronavirus situation around the globe calls for tighter border closures and stricter virus prevention measures, and not allowing any outside assistance whatsoever regarding the flood damage," Kim was quoted as saying.

According to the report, Kim ordered the party and the cabinet to complete all recovery works by an important political anniversary on Oct. 10. We “cannot let the flood victims face the 75th anniversary of the Workers' Party out on the streets,” Kim was quoted as saying.

The North has been extremely sensitive about any possibility of coronavirus infections. Borders with China and Russia were shut for months, while Kim upgraded the state’s emergency antiepidemic system to the maximum last month.

During the latest meeting, the North decided to lift a lockdown imposed on the city of Kaesong since July 24 after a North Korean defector allegedly returned from South Korea with coronavirus symptoms.

On Monday, the South’s Ministry of Unification said it will push forward with humanitarian assistance to the North, hinting at a possible aid package for the floods.

A group of businessmen who operated factories at the Kaesong Industrial Complex also said Wednesday that they were willing to offer food and other aid to flood victims and factory workers.

The United Nations and European Union also said this week that they will help if Pyongyang makes a request.

Meanwhile, Kim also carried out a reshuffle of top officials, which he announced at the meeting.

Workers' Party Vice Chairman Kim Tok-hun was named premier to replace Kim Jae-ryong. The replacement was made based on a review of the cabinet’s performance in economic affairs, the KCNA said. Kim Tok-hun was also give a new seat on the prestigious Presidium of the Politburo of the Workers’ Party.

Ri Byong-chol, who oversaw the country’s nuclear and missile development, was also given a new seat on the Presidium of the Politburo. The promotion was made only eight months after Ri joined the Politburo, indicating Kim’s push for strategic weapons development amid stalled negotiations with the United States. 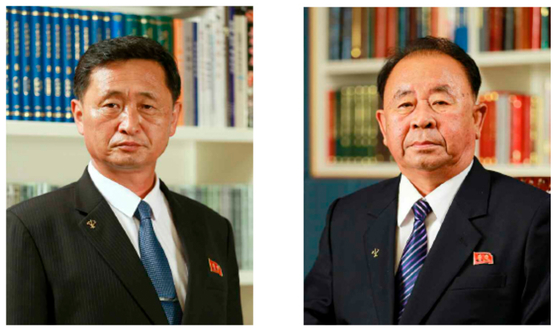 
The Politburo is the core organ of the Workers’ Party that decides policies, and its Presidium is the highest decision-making body.

With the addition of Premier Kim and Ri, the Presidium of the Politburo now has five members.