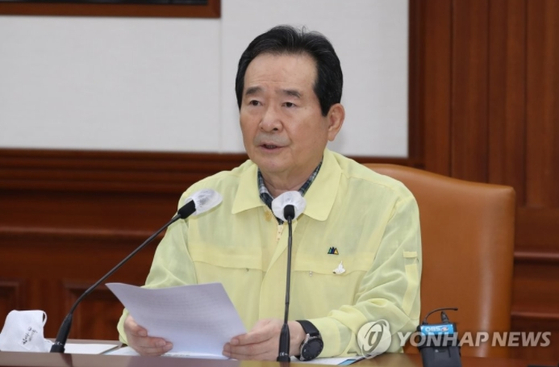 Prime Minister Chung Sye-kyun in an emergency briefing at the government complex in central Seoul on Saturday. [YONHAP]


The government raised the social distancing level in Seoul and Gyeonggi regions starting Sunday due to a recent spike in Covid-19 cases, effectively shutting down public facilities such as museums and art galleries as well as bars and singing rooms, banning all indoor gatherings of more than 50 people and restricting supporters from attending sports events.

“We are seeing a worrying uptick in the number of Covid-19 cases in Seoul and Gyeonggi and decided to heighten the level of social distancing measure to level two,” said Prime Minister Chung Sye-kyun in an emergency briefing at the government complex in central Seoul on Saturday. “We are at a critical time – if we do not stop the spread of the outbreak now, we may well be re-entering a dangerous phase of the pandemic that a lot of other countries are experiencing now.”


The measure goes into effect from Sunday and will be in effect for at least two weeks.


Korea saw 166 new cases on Friday, of which 155 were domestic cases and 11 imported, according to the Korea Centers for Disease Control and Prevention (KCDC). Of the local cases, 72 were in Seoul and 67 in Gyeonggi.


The increase in cases recorded Friday was the highest Korea has experienced since March 11, when 242 new cases were reported.


Korea was badly hit by the Covid-19 outbreak in late February, when it saw as many as 909 new cases daily, but was able to bring the number down to less than 10 by late April.


The number of domestic cases spiked in the past week however due to growing clusters of infections linked to churches, fast-food restaurants, schools and market places.


With a growing number of cases in churches, the Seoul city government and Gyeonggi provincial government banned all gatherings at churches except weekly regular services as of Saturday.


“Our priority now is to address the quick spread of the virus in the greater Seoul area,” Chung said. “We ask everyone for their kind cooperation.”


Korea has a three-tier social distancing system. When the KCDC deems that the number of cases can be managed through standard quarantine practices and the country’s health care system, it recommends level one distancing measures.