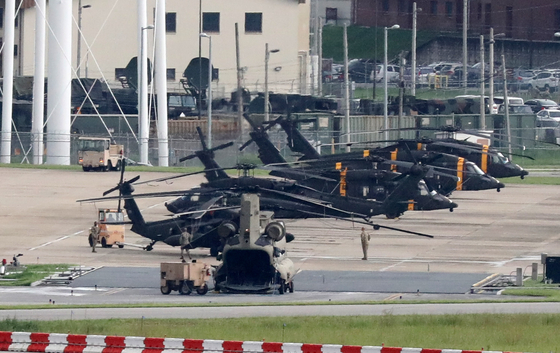 Helicopters parked at an airfield in Camp Humphreys, the headquarters of the U.S. Forces Korea (USFK), on Aug. 11, ahead of this week's combined military exercises between Seoul and Washington. [NEWS1]


South Korea on Sunday formally announced it will kick off combined military exercises with the United States on Tuesday, with drills to be scaled down this year as a result of the coronavirus pandemic.

In a statement, Seoul’s Joint Chiefs of Staff (JCS) said the allies will conduct computerized combined command post training from Aug. 18 to 28, with “all relevant conditions, such as the Covid-19 situation, comprehensively considered.”

The adjustments made to the drills, which the JCS said would be focused on maintaining the allies’ combined defense posture, signaled a major setback to South Korea’s timetable to retrieve wartime Operational Control (Opcon) of its forces.

Seoul had strongly pushed for the summertime exercises in spite of the ongoing pandemic in order to conduct an assessment of South Korea’s full operational capability (FOC) — a necessary step in the Opcon transfer process which Seoul had envisioned to complete by the end of President Moon Jae-in’s term in 2022.

But this month’s drills would only “partly” feature a rehearsal for how the allied command structure would operate with a South Korean general in command, the JCS said, hinting that the FOC assessment will not be completed.

On Seoul’s initiative, the allies were planning to complete the FOC assessment this year before moving on to an assessment of full mission capability (FMC) next year, the final step in the Opcon transfer.

The pandemic earlier forced the two countries to suspend their springtime joint drills scheduled for March. Earlier exercises conducted last year were also been scaled back in order to support diplomatic efforts to engage North Korea on denuclearization.

This month’s exercises were scheduled to begin on Sunday, but had to be postponed after a Korean Army officer scheduled to take part was diagnosed with Covid-19 on Friday.

The officer in question contracted the virus from a civilian after he was posted to a military education facility in Daejeon, according to the military. Around 500 people, including the approximately 70 people who had close contact with the officer, were tested for the virus, though no infections have yet been detected.

Military sources said the effective postponement of the FOC assessment this month was owed to U.S. reluctance due to the coronavirus, which has prevented U.S. troops stationed in Hawaii, Guam and Japan from joining the drills.

The allies are likely to conduct joint drills to test Seoul’s FOC in the first half of next year, shortening the timetable for the Opcon transfer.

The drills were due to simulate an armed conflict with North Korea, with the first part from Aug. 18 to 22 focusing on defense operations, while the second part from Aug. 24 to 28 featuring counterattacks.

Crisis management staff training, a preliminary exercise in preparation for the drills, was conducted from Aug. 11 to 14.

Summertime military drills between Korea, U.S., are a go