Members of conservative groups rally in Gwanghwamun, central Seoul, on Saturday, Korea’s Independence Day, to denounce what they called the corrupt practices of the Moon Jae-in administration. [NEWS1]

Korea counted 279 new coronavirus cases on Saturday alone, the highest figure in over five months as fears of a second wave escalate. Seoul recorded 141 cases, the first time ever that the capital reached a three-digit figure.

Most of the nationwide cases were traced to two Presbyterian churches in Seoul and Gyeonggi, each of which are known to have some 4,000 and 1,000 adherents, respectively.

Jun is widely known for his weekly antigovernment rallies in downtown Seoul. The vocal critic of President Moon Jae-in was placed under pretrial detention last February on charges of breaching election laws by calling on protesters to vote for conservative parties ahead of the April general elections, but he was released on bail in April after complaining about his deteriorating health and paying 50 million won ($42,120) to the court.

At least 126 Covid-19 patients have been traced so far to the other church in Yongin, Gyeonggi, just south of Seoul, known as Woori Jeil Church.

Health officials are more worried about the cluster at Sarang Jeil Church, given that the church is much larger than the one in Yongin. Worshipers from all over the country gather for Sunday services, making contact tracing that much more difficult and raising chances of a nationwide spread of the disease.

In a Sunday press briefing, acting Seoul Mayor Seo Jeong-hyup accused Jun in scathing remarks of disobeying self-quarantine orders, holding a huge antigovernment rally in Gwanghwamun on Saturday and “intentionally” delaying his church members from getting tested by spreading false rumors, calling the actions a “distinct illegal activity threatening the safety and lives of the community.”

Hours later, the Korean central government’s Covid-19 command center filed a complaint against Jun with the Seoul Metropolitan Police Agency on charges of violating the government’s self-quarantine orders and allegedly stymieing contact tracing efforts by submitting a redacted list of participants of his church’s recent services.

In an interview with the local Christian Today, Jun denied that his church members spread the virus, saying it appears they were “terrorized” by an external force.

Seoul officials said Sunday morning that 4,066 people connected to Sarang Jeil Church — most of whom went to the church recently and were on the visitors’ log submitted by the church on Saturday — have been identified to undergo a mandatory test for the coronavirus.

Of that list, 1,971 people live in Seoul, while the rest live in other parts of the country, some as far away as Jeju Island.

Two major sticking points, however, are that some 669 people on the list couldn’t be reached by the weekend, for reasons including the fact that they didn’t write down their addresses in detail. Officials said they also believe the list submitted by the church was redacted to protect certain members.

Officials at the Seoul city government said Sunday they were planning to personally visit the church building to obtain a full list of church members and recent visitors saved on the church’s computers, so they can compare that with the one submitted by the church. City officials also said they would cooperate with the police and other local government offices to make sure everyone gets tested.

Seo warned that anyone who disobeys government orders to be examined could be fined 2 million won and face additional charges for indemnities. 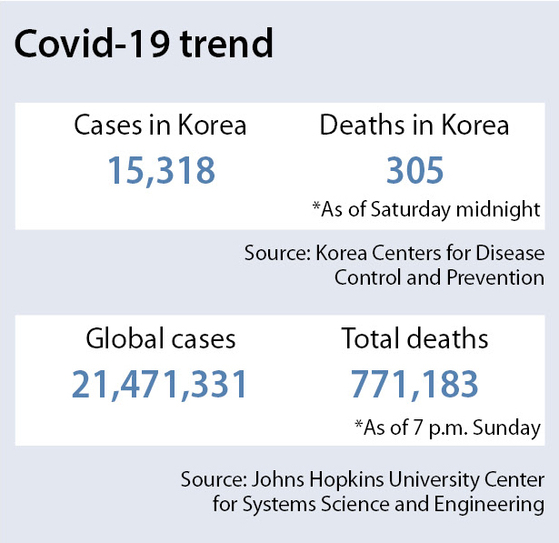 President Moon in a statement Sunday called the current state “an extremely grave situation” that will put Korea’s preventive measures to the test, adding that his administration has no other choice but to react “very sternly” against anyone who dares to challenge the national preventive system and threatens the safety of the public.

Moon stressed it was “immensely illogical” to hold a rally over the weekend and raise the possibilities of major virus transmissions, a direct jab at Jun and other conservative forces who took to the streets on Korea’s Independence Day.

Health authorities so far aren’t sure whether the two church clusters are related, or if they’re not, how the virus penetrated each church community. One common thread is that the mass transmissions seem to have occurred on Aug. 9 during services.

The first person at Sarang Jeil Church to have come down with the coronavirus was an adherent who tested positive last Wednesday. Eleven church members tested positive the next day. Cases began to soar as health authorities began to test everyone who attended the Aug. 9 service.

Kwon Jun-wook, deputy director of the Korea Centers for Disease Control and Prevention (KCDC), blamed worshipers for sitting too close to one another and singing hymns without wearing face masks.

The church building was especially packed that day, Seoul health officials said, because Aug. 9 was when Korea was in the midst of the monsoon season, and worshipers who would normally attend the service from an outdoor parking lot near the church building decided to go indoors to evade the rain.

At Woori Jeil Church in Yongin, the first person to have been diagnosed with the coronavirus was a man in his 30s on Aug. 11, who attended a service two days earlier and sang in the choir. Many other people in the 60-member choir have tested positive since.

Another major breeding ground for the virus seems to have been the church cafeteria, health officials said, as several people who later tested positive, including the 30-something-year-old man, went to eat lunch that day. The church claimed to local media that the church cafeteria had been closed since February, and that Aug. 9 was the first time it opened in nearly six months.

Unlike Sarang Jeil Church, the Yongin church has publicly apologized for the outbreak and promised to do whatever it can to cooperate with health authorities to stem the spread.

Both churches have been temporarily closed.

Nationwide, 279 people were diagnosed with the coronavirus Saturday and 166 on Friday. Of Saturday’s cases, 141 were in Seoul, 96 in the surrounding province of Gyeonggi, eight in Incheon, seven in Gwangju, six in Busan, five in South Chungcheong and one each in Daegu, Ulsan, North Chungcheong and South Gyeongsang.

There were 12 imported cases: four from India, two from Pakistan and one each from China, Japan, Kazakhstan, France, the United States and Kenya.

As of Saturday at midnight, a total of 305 Covid-19 patients had died in Korea, while 13,910 people had fully recovered. The country’s total case load currently stands at 15,318.

Over the weekend, the central government announced that Seoul and Gyeonggi will have their social distancing alert levels raised to two from one on the three-tier system for the next two weeks starting Sunday.

That generally means public facilities and certain high-risk businesses — such as clubs and bars that involve dancing — will have to take additional measures to space out their visitors more rigorously, in part by limiting the number of people allowed into their buildings at any given time.

Public welfare centers and day care centers will be strongly recommended to close, and any indoor meetings involving 50 people or more, or outdoor meetings involving 100 people or more, will also be recommended to be postponed. All professional sports games in Seoul and Gyeonggi will return to the no-spectators rule, and civil servants will go to work on staggered schedules.