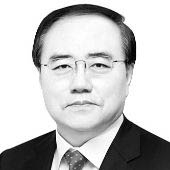 Kim Sung-han
The author, former vice minister of foreign affairs and trade, is the dean of the Graduate School of International Studies at Korea University.

This year marks the 70th anniversary of the start of the 1950-53 Korean War. On June 25, 1950, North Korean soldiers crossed the 38th parallel to attack South Korea. The conflict escalated to an international war when forces from the United Nations and China joined. The Armistice Agreement was signed on July 27, 1953, but a peace agreement declaring the end of the Korean War was never signed, which leaves both Koreas technically still at war even to this day. Luckily a second Korean War has yet to erupt. I’d rather call the current state a time of “passive peace,” which is different from “aggressive peace” in which exchanges and cooperation between the two Koreas are robust after establishing a peaceful regime on the peninsula. On the occasion of the 70th anniversary of the Korean War, Seoul must genuinely ponder about the possibilities of achieving “aggressive peace” with Pyongyang.

North Korea has carried out multiple provocations against the South since 1953 due to its failure to communize the peninsula during the war. Yet it was the Mutual Defense Treaty signed between South Korea and the United States in October 1953 that enabled Seoul to maintain even “passive peace.” With the help of the United States on the national security front, South Korea was able to focus and thrive on economic development. But one sticking point remained: North Korea’s nuclear development.

When former North Korean leader Kim Il Sung visited the Hamhung branch of the State Academy of Sciences in November 1968, he urged scientists to quickly develop a nuclear weapon and long-range missiles capable of attacking the U.S. mainland. Kim’s plan was to use the weapons in deterring U.S. interference in peninsular affairs when it tries to reunify with South Korea under a single communist regime.

In a speech commemorating the 70th anniversary of the Korean War in June, President Moon Jae-in declared that the two Koreas’ “competition over political and economic systems ended a long time ago,” mentioning that the South’s GDP was more than 50 times larger than that of the North, and the South’s trade volume over 400 times bigger. Moon suggested both Koreas to co-exist in peace, saying Seoul does not have “any intention to force” its system on Pyongyang, and adding, “We will continuously search for routes that are mutually beneficial for both Koreas through peace.”

But the fact that South Korea is economically better off than North Korea does not support the argument that both Koreas ended their competition. For the competition to really end, Seoul should have the strength and determination to protect the economic development and liberal democracy it has cemented over the past seven decades. But Pyongyang, a de-facto nuclear state, is capable of attacking both South Korea and the United States with ballistic missiles tipped with nuclear warheads.

Seoul is in a very difficult position to devise a plan to deter Pyongyang’s nuclear weapons and missiles because it has already promised Beijing a “3 Nos” policy: not to allow any additional deployment of the U.S.-led Thaad (Terminal High Altitude Area Defense) system, not to participate in a U.S.-led missile defense system, and not to participate in a Seoul-Washington-Tokyo military alliance.

There are two peaceful roads Seoul can choose from. One is to put the North Korean denuclearization issue on the back burner, declare a formal end to the war and economically engage with North Korea through inter-Korean cooperation projects. The other is to limit any kinds of assistance to North Korea to humanitarian aid specifically targeting the North Korean people, keep all North Korean sanctions in place and prepare for a possible North Korean nuclear threat through the South Korea-U.S. alliance.

The first plan would mean Seoul has to acknowledge Pyongyang as a nuclear state at the cost of undermining the South Korea-U.S. alliance, and live in a state of “submissive peace” while walking on eggshells around a country that possesses nuclear weapons. A war-ending declaration that fails to lead to North Korean denuclearization will only weaken the South Korea-U.S. alliance and threaten whatever passive peace falls into place.