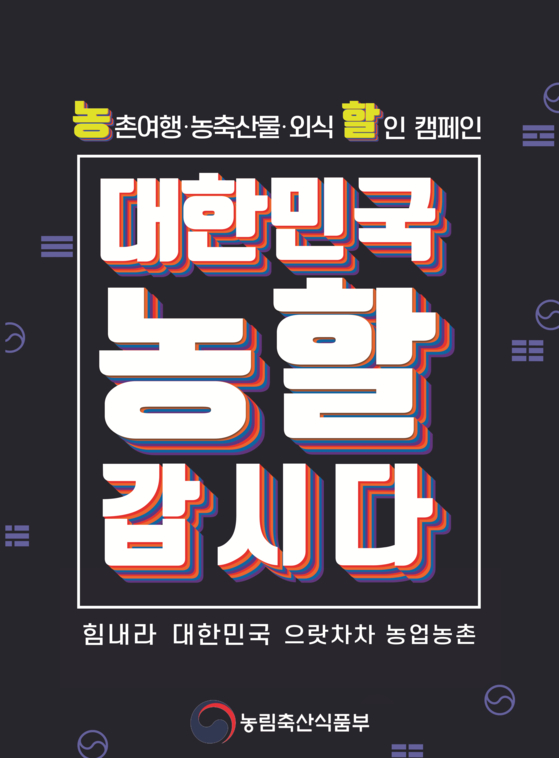 Poster that advertises a discount campaign that launched in July for agricultural and livestock products to boost consumer demand. [MINISTRY OF AGRICULTURE, FOOD AND RURAL AFFAIRS]


Promotions are on hold and discounts programs are suspended as Covid-19 cases tick up again and the government rethinks the comeback strategy amid criticism that the plan was all a bit hasty.

The government announced on Saturday it is temporarily ending the initiative from Sunday that offered discounts for tourism, dining and concert expenses following the taking of the social distancing alert to Level 2, which calls for smaller gatherings and more precautions.

The Ministry of Agriculture, Food and Rural Affairs and the Ministry of Oceans and Fisheries started an initiative in July that funded 30 percent of the travel expenses, of up to 30,000 won ($25). for tours to farming and fishing villages. Upon the resurgence in cases, it has decided to completely halt the initiative. Those that already purchased the tourism packages bundled with the discounts can use them while adhering to quarantine measures.

The Agriculture Ministry also decided to put a stop to a dining fund program introduced last Friday. The initiative refunded 10,000 won for every five transactions of over 20,000 won made with debit or credit cards at restaurants on weekends. To increase participation, any purchases made past Friday 4 p.m. were also made eligible — until the project came to an end two days after its start.

The Agriculture Ministry said the transactions made toward the program will all be counted after the campaign resumes. The ministry also warned that there could be some errors in the transaction notification and inquiry system run by card companies until the end of Monday, when the holiday ends.

The Ministry of Culture, Sports and Tourism also temporarily ended validations for the six discount coupons it started distributing last Friday as part of the campaign to boost spending. The Culture Ministry’s initiative had provided 30,000 won to 40,000 won discounts for reservations made online for domestic hospitality businesses. The ministry also carried out an initiative that gave a 30 percent discount for using preselected domestic tourism programs.

“The ministry will ensure that the coupons that have already been distributed are used under strict quarantine rules, and those that have not been distributed will temporarily be on hold,” the Culture Ministry said in a statement.

The series of initiatives started out as measures for boosting domestic consumption, as exports suffered due to the coronavirus pandemic. The government had aimed to ramp up consumption by also designating Aug. 17 as a temporary holiday. However, the resurgence of cases in the metropolitan region disrupted the plan.

The Korea Centers for Disease Control and Prevention reported 279 new cases on Saturday, the highest number of daily cases since 367 on March 8.

The government has been criticized for overlooking the possibility of a resurgence, since such campaigns to boost demand in tourism and dining can increase contact among people and increase the risk of virus spread.

The Asahi Shimbun reported on Aug. 6 that the number of new cases rose more than twofold after the Japanese government implemented the “Go to travel” campaign, which funded 50 percent of domestic traveling expenses.

From the beginning stages of the campaign, there were criticisms that the quarantine efforts clashed with measures to boost the economy. Despite the concerns, however, ministries published letters of clarification, saying they would strictly adhere to the quarantine guidelines. They were late to halt the campaign, since it only happened after signs of the second outbreak appeared following the recent spread of cases in the metropolitan region.

Yet, the agriculture and oceans ministries said they would continue their discount campaigns for agricultural and livestock products.

Kicking it in New York