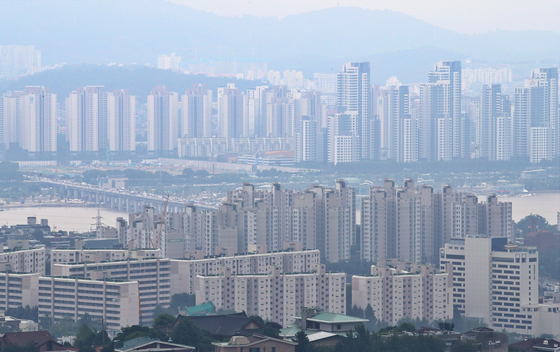 View of Seoul from Mount Namsan on Aug. 14. A recent survey by the Korea Research Institute for Human Settlements have found that more people expect jeonse prices to go up as landlords are switching to monthly rent, further reducing the available jeonse rents. [YONHAP]


With the jeonse system under threat by the tenant protection laws passed, a Democratic Party lawmaker asked a question: What's wrong with just paying monthly rent?

The question has become a bit of a meme for supporters of the bills.

The jeonse system, which is unique to Korea, allows tenants to pay a large lump sum to live in a property for a number of years. At the end of the term, the money is returned to them without interest.

While it is true that monthly rent and jeonse are from the accounting point of view much the same, as rent should simply spread of the value of the jeonse out over time, in the real world, they create a different sort of burden for the tenant.

This is especially the case in the time of Covid-19.

With the pandemic creating instability in terms of work and personal budgeting. a long-term jeonse contract brings a certain level of comfort to people who need a place to live. For a certain amount of time, they can live in one place without having to cover rent every month.

While a jeonse contract can come with its own set of costs, especially if money was borrowed to fund the deposit, the outgoings are likely to be significantly lower.

Two weeks ago, a colleague told me that he is now a victim of the Moon Jae-in real estate policy.

Our office is relocating to Sangam-dong in Mapo District next month, and the co-worker signed a jeonse contract for an apartment nearby the new office.

When he first mentioned it, he said the jeonse price had increased 9.5 percent while he was shopping around. However, the landlord decided to cancel the contract and further raised the jeonse price. When compared to the first time the co-worker was shopping for a jeonse apartment, the rent had gone up 19 percent.

Jeonse prices in Seoul were up 7.7 percent in July on year, and up 10.8 percent over a two-year period.

Jeonse has been losing popularity for years. In 2012, it was overtaken by monthly rent, with 50.5 percent of people paying monthly rent and 49.5 percent paying jeonse.

So what’s wrong with monthly rent?

At a time of crisis like the one we’re currently in, jeonse protects those who lose their jobs or income. As jeonse guarantees a minimum stay of two years, among the 99 problems a tenant can have, secure housing isn't one.

The tenants don’t have to worry about being evicted, which is becoming a problem in the United States as unemployment support ends and the rent is due.

This moratorium expired on July 24.

The catch is, this moratorium only applies to federally subsidized housing.

In a recent report, NPR quoted Aspen Institute’s Zach Neumann, founder of Covid-19 Eviction Defense Project, as saying that 30 million are at risk of being evicted by the end of next month.

Jeonse is a unique system created during the time of rapid economic expansion in Korea in the 1970s when people flocked to the cities to find jobs. They couldn’t afford to buy houses, so they rented apartments, while landlords who couldn’t borrow money from banks were able to secure seed money from jeonse contracts.

Especially during hard times, jeonse offered a degree of security.

Democratic Party lawmaker Yoon said monthly rent is like paying interest rates on jeonse loans, so living on monthly rent wouldn’t be much different from living on jeonse money borrowed from banks.

I hope the lawmaker realizes that interest rates are currently low and that jeonse is psychologically more soothing than the idea of having to pay monthly rent which can't be recovered after two years.

People are not worried about the type of rent they pay. Security is paramount.

That’s why people are angry over the Democratic Party’s forceful push of the bills. That is why their support has been falling below that of their conservative rival.