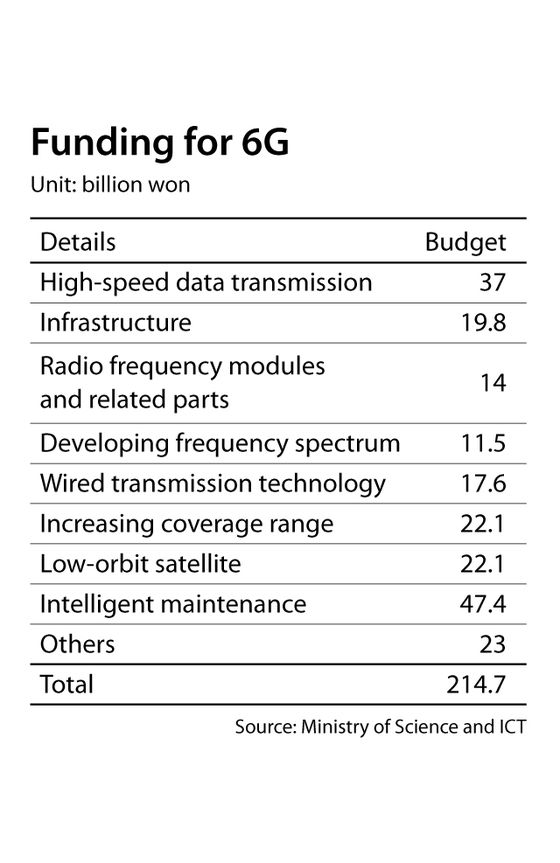 With the hoopla over fifth-generation wireless technology barely subsided, Korea is now girding itself for 6G.

The Ministry of Science and ICT kicked off research and development work on 6G earlier this month with a pledge to inject 214.7 billion won ($181 million) through 2025.

That may sound like a pittance, but the government's goal is large: for Korea to be the first country to commercialize 6G mobile networks as early as 2028.

It was, of course, the first to roll out 5G in April 2019, and just barely — with U.S. carrier Verizon commercializing its network an hour after Korea in parts of Chicago and Minneapolis.

Korean telecom companies have yet to migrate to the standalone mode of 5G — a network infrastructure exclusively dedicated to 5G — and offer limited in-building coverage. Only 7 million consumers in Korea use 5G services, which require the very latest smartphones.

But the Science Ministry is emphasizing the importance of adopting 6G as early as possible for Korea to keep its place on the technological ladder that intersects with so many other industries.

With a peak data rate of 1,000 gigabits or 1 terabyte per second, the data download speed of 6G is approximately 50 times faster than 5G.
Another advantage comes from higher coverage distance in terms of altitude — of up to 10 kilometers (6 miles) from the ground compared to 5G’s range of 120 meters (394 feet), allowing for better network support for drones and other unmanned aerial vehicles.

Lee Kyung-han, a computer engineering professor at Ulsan National Institute of Science and Technology, predicts that 6G could unleash new services such as hologram-based communications.

“In addition to its capacity for better managing soaring data traffic […] 6G could also enable fresh services like hologram communication, holoportation and digitization of five senses on humans,” the professor said during a presentation in February.

In its road map, the Science Ministry divided its development into two phases: one conducted between 2021 and 2025 and the other from 2026 to 2028.

The early stage will focus on supporting the development and evaluation of core 6G technologies for international standards.

The latter will be spent on technologies required for commercialization of the next-generation network and pilot projects in a variety of sectors including media, autonomous vehicles, health care and urban infrastructure.

Of the 214.7 billion won, the ministry will allocate 37 billion won to develop wireless technology that allows for 1 terabyte download speeds and 11.5 billion won for utilization of frequency spectrum for the new connectivity.
Another 22 billion won will be used to ensure coverage range and 47.4 billion won for establishing automated systems to manage and maintain 6G.

Korea's is not the only government serious about 6G.


In detailing its strategies, the tech giant issued a white paper in which it set a goal of completing standardization of 6G by 2028.

LG Electronics announced last week that it will partner with KAIST and the Korea Research Institute of Standards and Science to research and develop 6G.