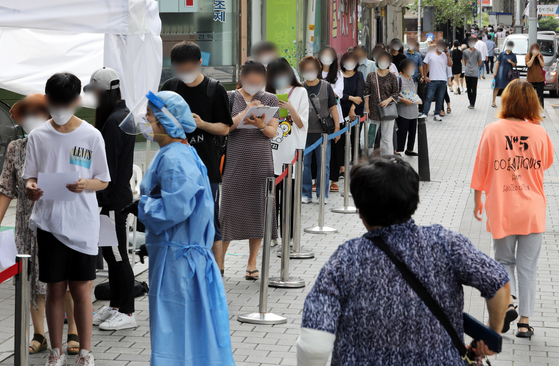 People wait to get tested at a Covid-19 testing site in Seongbuk District, central Seoul, Monday, amid a growing cluster from a church nearby. [NEWS1]

Korea added 197 new cases of the coronavirus Sunday, down from 279 cases the day before, as a cluster at a politically controversial church in Seoul continues to grow — and spread across the nation.

The vast majority of the new infections were reported in Seoul, 89 cases, and Gyeonggi, 67 cases.

By Monday noon, the cluster from Sarang Jeil Church in Seongbuk District, central Seoul, a Presbyterian church with some 4,000 adherents, reached 319 related cases, the Korea Centers for Disease Control and Prevention (KCDC) announced.

Health officials announced Monday afternoon that the church’s pastor, Rev. Jun Kwang-hoon, was among the latest infections, although it was not immediately known when he received his positive test result.

The vocal critic of President Moon Jae-in participated in a massive antigovernment rally last Saturday on Liberation Day, which is believed to have been joined by several thousand conservatives.

All patients in the Sarang Jeil Church cluster have been identified as either churchgoers or their acquaintances. Most patients live in Seoul, but there are some who live in suburban areas, health officials said.

According to KCDC data, among the 319 Covid-19 patients linked to the church, 209 live in Seoul, 85 in the surrounding province of Gyeonggi, 13 in Incheon, five in South Chungcheong, four in Gangwon and one each in Daejeon, North Gyeongsang and Daegu.

Health officials previously mentioned that the church, which is currently shut down, used to attract worshipers from all over the nation, even as far from Jeju Island. 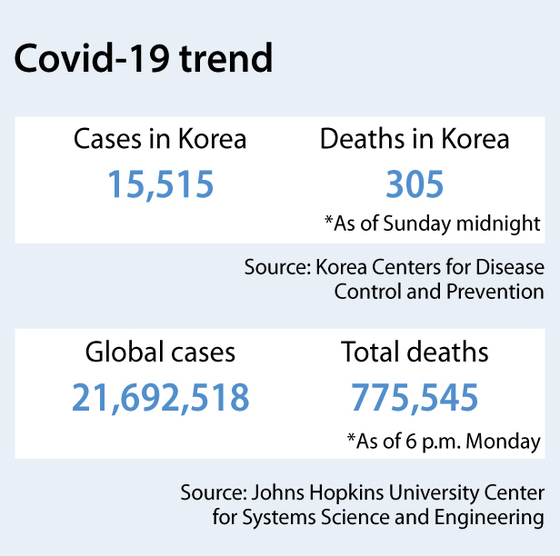 Another cluster at the Woori Jeil Church in Yongin, Gyeonggi, a Presbyterian church with some 1,000 worshippers, added five more cases as of Monday noon, reaching a total 131 cases.

KCDC data shows 122 people in this cluster are church members, while the rest are their acquaintances. All but five live in the greater Seoul area, mostly in Gyeonggi. The cluster has spread to a welfare center, distribution center, day care center and real estate office, officials said.

KCDC Director Jung Eun-kyeong said Monday in a press briefing that the coronavirus was spreading throughout the country at a “furious pace,” warning Korea was now in the early stages of another big outbreak.

“If we don’t control the spread right now, [the number of infected patients] will exponentially grow out of control and send our medical system crumbling and cause colossal economic damage,” said Jung.

The KCDC chief urged the public to keep social distance from others and wear face masks at all times, reminding them they can inadvertently transmit the virus at “any time and place.”

As contact tracing continues in regard to patients linked to the Sarang Jeil Church, health officials said some appear to have attended last Saturday’s antigovernment protests in Gwanghwamun, central Seoul, while being infected, though it wasn’t immediately known whether they actually transmitted the virus to other protesters, who were mostly older people.

While Covid-19 testing for members of the Woori Jeil Church in Yongin is almost over, health officials hinted many more infections could rise from the Sarang Jeil Church in the coming days.

Vice Minister of Health and Welfare Kim Gang-lip said Monday in a press briefing that as of Sunday at midnight, some 2,000 out of 4,000 people who recently visited the church have been tested, and that 3,400 people were under self-quarantine orders. The Seoul Metropolitan Government said in a separate statement later the same day that nearly 1,000 people couldn’t be reached over the phone.

The Seoul office said it was cooperating with other local government offices and the police to track those people down, urging everyone who recently went to the church or had contact with any churchgoers to get tested immediately.

Both the country’s Covid-19 command center and the Seoul Metropolitan Government filed complaints with the Seoul Metropolitan Police Agency against Rev. Jun Sunday on charges of violating self-quarantine orders last Saturday and allegedly hampering contact tracing efforts by submitting a redacted list of participants of his church’s recent services.

Jun was placed under pretrial detention last February on charges of breaching election laws ahead of the April general elections by allegedly calling on protesters to vote for conservative parties before the official election period had begun. He was released on bail in April after complaining about his deteriorating health and paying 50 million won ($42,000) to the court.

Seoul prosecutors Sunday asked the Seoul Central District Court to revoke Jun’s bail on the grounds that he violated the court’s order not to participate in any rally related to his trial while released on bail.

In a press briefing Monday, the lawyer for Jun and the Sarang Jeil Church denied the pastor violated the government’s self-quarantine orders and said they filed a complaint against Health Minister Park Neung-hoo and Acting Seoul Mayor Seo Jeong-hyup for allegedly defaming and spreading false information about Jun.

Jun’s lawyer asserted the pastor received a notification from the government ordering his self-quarantine at 6 p.m. on Saturday, after he had returned from the antigovernment rally in Gwanghwamun.

Health officials adamantly denied this, saying a civil servant at the Seongbuk District office had personally visited Sarang Jeil Church at 2 p.m. Saturday to deliver a document informing the church that its worshippers and Jun need to self-quarantine. Officials said the church faxed them a document two hours later verifying they accepted the government’s self-quarantine order.

Nonetheless, Jun appeared at the Gwanghwamun rally at around 3 p.m. Saturday, officials said.

Other than Sarang Jeil Church, Seoul health officials said they were also keeping close tabs on Yoido Full Gospel Church in Yeouido, western Seoul, Korea’s largest Protestant church with nearly 560,000 adherents. Ever since one churchgoer who lives in Gyeonggi tested positive on Aug. 9, at least nine people linked to that person is known to have come down with the virus so far, all living in Gyeonggi.

Seoul officials said they were undergoing contract tracing procedures to verify whether a cluster is burgeoning at the Yeouido church as well.

Among Saturday’s 197 new Covid-19 cases, nine were from abroad: two from Bangladesh and one each from Kyrgyzstan, Indonesia, Kuwait, Malta, the United States, Algeria and South Africa.

No patient died Saturday, leaving Korea’s total death toll at 305. Seven people recovered, bringing total recoveries to 13,917. In all, the country has counted 15,515 Covid-19 cases as of Sunday at midnight.

Starting Monday, health officials said some foreigners will have to pay for their own Covid-19 treatment fees in case they violate government self-quarantine orders, submit false documents about their Covid-19 symptoms or come from a country that charges Korean Covid-19 patients.

In regards to foreign nationals staying in Korea long term — who are obligated to enroll in the National Health Insurance Service — they will have to pay for any treatment fees that are not covered by the health insurance program in case they arrive in Korea after getting infected abroad. The government will fully cover treatment fees for long-term foreigners if they locally contract the disease.