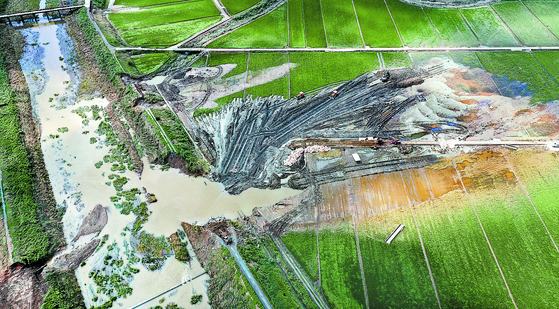 An embankment along the Munpyeongcheon stream, a tributary of the Yeongsan River in South Jeolla, was breached on Aug. 8, flooding nearby farmland. [JANG JUNG-PIL]


The quiet farming village of Jooksan-ri in South Jeolla was devastated earlier this month when a local stream flooded hundreds of hectares of surrounding farmland, following one of the most extreme rainy seasons on record in Korea.

On Aug. 8, after a night of intense downpours, the Munpyeongcheon Stream — a tributary of the Yeongsan River — overflowed near the villages of Bokam, Gaheung and Jooksan in Naju, South Jeolla, swamping around 888.2 hectares of rice paddies and destroying the crops.

The same day at around 10 a.m., a dike broke on the Seoshicheon Stream, a branch of the Seomjin River, causing rising waters to sweep up large swaths of rural countryside in Gurye County and prompting the evacuation of hundreds of local residents.

Such flooding occurred nationwide amid one of the longest rainy seasons on record, reigniting political debate about a highly controversial government project in the past known as the four-rivers restoration project.

A signature project of the Lee Myung-bak administration, the project aimed to develop areas around the Han River, Geum River, Yeongsan River and Nakdong River by building 16 weirs, five dams and 96 reservoirs. The goal was to reduce floods and conserve water in the event of droughts.

From the start, the project drew fierce criticism for its astronomic costs, and was criticized as a boondoggle for Korea's construction companies, where Lee was an executive before going into politics. Its effects on water quality in the affected areas has been debated, not to mention its questionable efficacy in reducing droughts and floods.

The endless debate over the four-rivers project overlooks the risks posed by flooding in smaller streams and waterways not covered by the project, which caused some of the worst problems this month.

Estuaries across the country like the Munpyeongcheon and Seoshicheon streams are prone to flooding during the summer rainy seasons, often causing deaths and accidents that receive scant attention by the media or authorities.

Statistics, however, show that such medium- or small-sized waterways are actually more vulnerable to floods than larger rivers. According to a report on flooding released by the Ministry of Environment for 2018 to 2019, only 1.6 percent of all areas damaged by floods in those years occurred around major rivers — the Nam, Hyeongsan and Imjin — while 98.4 percent involved regional streams and waterways.

Another statistic showed that of the 11.8 billion won ($9.95 million) in property damage caused by flooding during those two years, 98.5 percent — around 11.6 billion won — occurred in areas around smaller streams. The affected areas were nationwide, across Gyeonggi, Chungcheong, Jeolla, Gyeongsang and Gangwon.

Experts and officials have long cited the need for infrastructure to control floods on tributaries of major rivers and smaller streams.

In 2014, the evaluation committee of the four-rivers project, a panel of independent experts, formally proposed to the government that earthworks be built at 48 smaller streams nationwide to obtain a “fundamental solution” to yearly flooding.

The Environment Ministry’s flooding report from last year also noted that tributaries were only subject to temporary flood control projects, and that larger measures “befitting each region and location” needed to be found.

Despite such proposals, few steps have been taken by the central or local governments. After all the controversy generated by the four-rivers project, officials fear pushing any infrastructure projects on these smaller tributaries. As these waterways are managed by local governments, a lack of interest on the part of provincial chiefs means such projects are unlikely to move forward.

“What has the government done all this time? It has complained about the four-rivers project, but after the Lee Myung-bak government there has been no work done on streams and tributaries,” said Choi Suing-il, a professor emeritus at Korea University’s department of environmental engineering.

“[Officials] have cited a variety of causes for this [month’s] flooding, but it is important to remember that there has fundamentally been a lack of preparation for flood risks.”

This year showed that no matter how much work is done in controlling major waterways, flooding will also pose risks as long as the smaller estuaries that feed them are left undeterred. The four-rivers project built dikes and dredges across the major rivers, but floods remain commonplace.

“When waters flow down from the mountains they pass through these streams before entering larger systems,” said Jeong Sang-man, a professor of civil and environmental engineering at Kongju National University.

“Water flows are all connected, so if there is one part left unmanaged or broken, the entire system will malfunction.”

Last week, all 77 households in a small village in Namwon, North Jeolla, were forced to evacuate after a 100-meter embankment on a local stream near the Seomjin River broke, flooding the local countryside. The entire village was submerged and its residents left homeless.

A similar situation occurred at a village in Changnyeong, South Gyeongsang, where a 40-meter dike broke. The embankment, built in 2004 to prevent strong waterflows from the Nakdong River, failed to withstand a water level of 17.6 meters, despite being designed to withstand waters up to 18.56 meters.

Residents in the two villages said they had repeatedly asked local authorities and water management officials to renovate the embankments. Their calls went unheeded.

Experts say environmental irregularities brought on by global climate change — including the risk of annual heavy flooding — have escalated the need for a long-term blueprint to deal with waterways across the country.

“Projects like flood control, which require long-term investment and management, only become issues when disasters occur,” said Prof. Choi. “The government and politicians must prioritize budgets for such infrastructure projects for one or two decades.”

Seo Il-won, a professor of civil and environmental engineering at Seoul National University, noted the projects underway at Korea’s waterways appeared rushed and inadequate to deal with potential natural disasters that could occur in years to come.

“National infrastructure projects must be planned and researched, designed, built and managed with a farseeing vision independent of presidential administrations,” he said.

Other experts noted more attention needed to be paid to smaller streams and waterways not covered by the four-rivers project. Jang Suk-hwan, a professor of civil engineering at Daejin University, stressed that parameters for designing embankments and flood control infrastructure needed to be raised, and called for closer scrutiny into the use of local government budgets devoted to flood control projects in rural areas.

In order to address growing public criticism in the aftermath of this month’s rains, the Environment Ministry announced on Monday it will be forming an independent committee of experts to assess the management situation of dams and embankments across the country.

The ministry is also set to launch a separate body to draft a series of long-term measures to improve responses to climate change. The body, headed by ranking ministry officials, will review the state of dams, waterways and flood management systems across the country as well as project the growing risks of flooding in the future.

Along with revising guidelines for flood management, the ministry further plans to propose revisions to laws pertaining to dam construction and managing waterways.