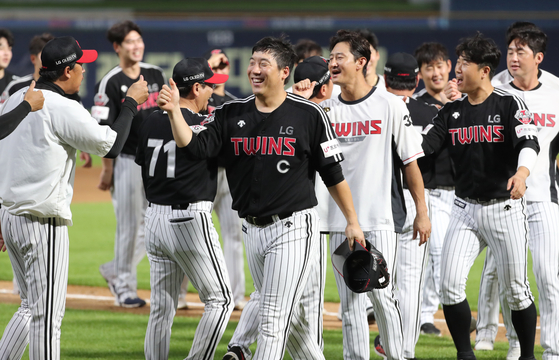 The LG Twins celebrate after picking up a win against the NC Dinos at Changwon NC Park in Changwon, South Gyeongsang on Sunday. [YONHAP]


Despite the rain and heat, the LG Twins extended their winning streak over the weekend.

Heading into the weekend with a two-game winning streak, the Twins continued their strong performance with a 10-4 victory on Friday. While the two clubs were tied at 4-4 until the seventh inning, the Twins finally regained the lead by scoring four runs at the top of the eighth and another two runs to finish off at the top of the ninth inning.

With Tyler Wilson as the Twins’ starter on Saturday, the Seoul club got off to a strong start by scoring 10 runs in the first three innings to pick up a 13-4 victory. With that win, Wilson picked up his seventh win of the season. To finish off the weekend, the Twins picked up a close 6-5 victory on Sunday.

By sweeping the weekend series against the top-ranked NC Dinos, the Twins moved up a spot to third, only one and a half games behind second-ranked Heroes. The sweep allowed the Twins to be one game ahead of the Doosan Bears, now the fourth-ranked club.

Thanks to the Twins’ sweep, this also allowed the second-ranked Kiwoom Heroes to get only half a game behind the Dinos. While the Dinos were swept at home over the weekend, the Heroes picked wins against the Lotte Giants at Sajik Baseball Stadium in Busan over the weekend.

The streak allowed the Heroes to get right behind the Dinos. Looking at the current number of games played, the Heroes are at an advantage as they’ve played the most number of games, at 87. This means that the Heroes will have the least number of doubleheaders to be played as the season heads into September.

The Dinos played seven fewer games than the Heroes. Looking at the Dinos’ streak in the month of August, they’ve been struggling to pick up wins as they've only picked up three wins while losing eight throughout 11 games.

Elsewhere over the weekend, the Kia Tigers also managed to sweep their weekend series against the ninth-ranked SK Wyverns. With a sweep, the fifth-ranked Tigers managed to extend their lead at fifth to one and a half games ahead of the sixth-ranked Wiz.

Starting Tuesday, the Twins will finally be returning home, as they will play a two-game series against the Tigers at Jamsil Baseball Stadium in southern Seoul, starting at 6:30 p.m. But unfortunately, the Twins fans won’t be able to make their way out to the ballpark as some of the clubs closed their gates once again.

As the government raised the social distancing level in Seoul and Gyeoggi regions on Saturday, due to a recent spike in Covid-19, half of the KBO clubs — the Bears, Twins, Heroes, KT Wiz and the SK Wyverns — closed their home stadiums and are once again back to playing at empty stadiums.

The 10 KBO clubs will continue their season with a two-game series instead of three. This will make the players even more tired as it’ll require more traveling. Making matters worse, as the KBO made changes to their rules on Aug. 13, the clubs will start playing doubleheaders in August so they can hit 144 games in the regular season.

Originally, the KBO didn’t allow clubs to play doubleheaders in the months of July and August, but due to one too many rain cancellations, some of the clubs will start playing two games a day starting in the week of Aug. 24.

Looking at other clubs' schedules, two of the five games will be played at empty stadiums. Along with the Twins, the Wyverns will be hosting their two-game series against the Hanwha Eagles at an empty stadium at Munhak Baseball Stadium in Incheon.